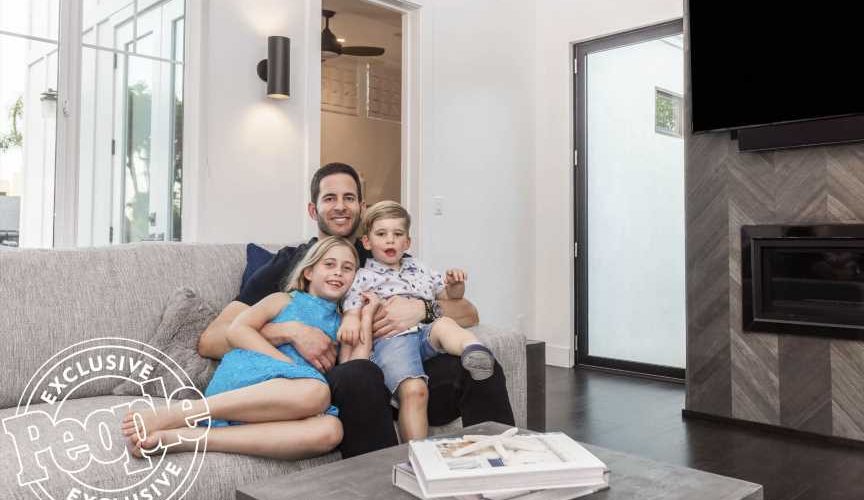 Tarek El Moussa may be an expert at flipping houses, but his family is his true pride and joy.

The Flip or Flop star shares daughter Taylor, 8, and son Brayden, 3, with his ex wife Christina, who recently remarried British TV host Ant Anstead. In an exclusive clip from Tarek’s new reality series, Tarek’s Flip Side, that will be available on HGTV.com, the real estate pro shares a glimpse into his personal life.

“Every day that I have my kids, we’re in the front yard,” El Moussa says in the video (above). “We’re riding scooters. We’re playing basketball. We’re throwing toys at each other. We’re chasing each other.”

In the video, Tarek can be seen playfully wrestling with his kids, and even wearing headgear as Taylor sports boxing gloves and throws punches at him.

“It’s fun,” Taylor says of the activity. “Well… not really for him, but for me, it’s really fun.”

When asked what her dad is like by one of the producers, Taylor responds by saying, “He’s fun, playful.”

She continues, “He’s not strict. He says he’s going to put my little brother in timeout for two minutes and he does it for five seconds.”

Tarek explains, “I can say without a doubt in my mind, I am one million times a better person than I ever would have been if I didn’t have my kids.”

According to a release from HGTV, Tarek’s new digital series “takes viewers behind the scenes after the TV cameras stop rolling, giving fans a glimpse of Tarek’s personal life.”

Tarek’s Flip Side premieres in August 2019 on HGTV.com. It will also be available on the HGTV app, on demand across all platforms, HGTV Facebook and HGTV’s YouTube channel.

Related posts:
14/06/2019 Health News Comments Off on Tarek El Moussa's Daughter Taylor Says He Is 'Not Strict' in Sneak Peek of New Solo Series
Categories
Recent Posts
We and our partners use cookies on this site to improve our service, perform analytics, personalize advertising, measure advertising performance, and remember website preferences.Ok