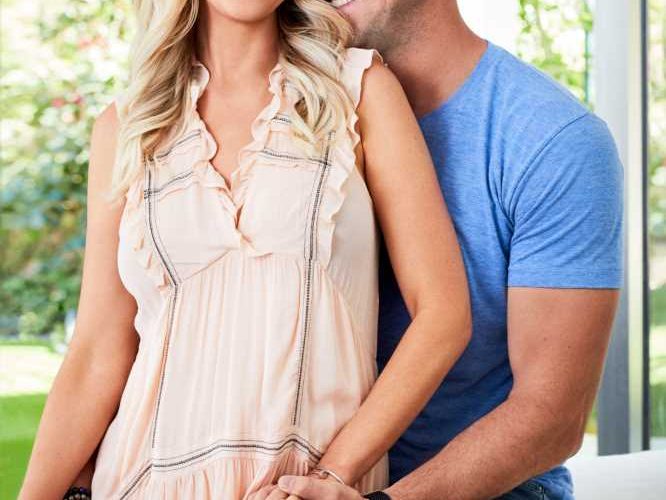 Ant Anstead got an extra jolt alongside his caffeine one morning, thanks to wife Christina.

In this week’s issue of PEOPLE, on newsstands Friday, the pregnant Flip or Flop and Christina on the Coast star revisits the funny moment she told her new husband that he was going to be a dad again.

“I just felt different, so I decided to take a pregnancy test,” says Christina, 35. “It was the day after we landed from our honeymoon and right away, pregnant! And I was in the bathroom by myself, like, ‘Oh, my God! What?’ I was shocked, like, ‘Ah, no wonder! I’m nesting already!’ “

“So I ran out to tell [Ant] and he wasn’t there. I don’t know where you were, you were in the bathroom or something,” she addresses her husband. “He always makes coffee in the morning, so I just chucked the pregnancy test in the coffee cup because I didn’t know what to do and I wanted to surprise him, and I ran around the corner.”

“I thought it was a thermometer,” Ant, 40, tells PEOPLE of his initial reaction to the gesture. “I was thinking, ‘Is the coffee machine broken?’ “

Their baby boy on the way is the couple’s first child together, while Christina also shares son Brayden James, 3½, and daughter Taylor Reese, 8½, with her ex-husband Tarek El Moussa. Ant is also a father to son Archie, 12, and daughter Amelie, 15, with his ex Louise.

And according to the dad-to-be, “Five’s a good number” of children, though the couple can’t help recalling the shock of first learning they would be parents together.

“It was a massive shock, but you were right about holidays,” the British television presenter tells Christina of their post-wedding Bora Bora getaway. “When you go on holiday, you completely relax, right? And when you relax, you start to be in tune with yourself.”

“We were writing down … bucket-list destinations, and then landed on our honeymoon and straightaway she completely went 180 and was like, ‘Well, actually, no, I don’t want to travel this year,’ ” Ant adds. “And yet, now that we know, you are absolutely nesting.”

Christina admits she didn’t want to tell her kids about the pregnancy during the first trimester because of the increased “risk” of something going awry — but she started showing “really early” this time, and her daughter knew something was up immediately.

“She was looking at me, and she kind of rubbed my stomach and gave me a weird look,” the HGTV star recalls. “So when I finally did tell her, she was like, ‘I knew it! I keep telling you! It felt different!’ “

Christina on the Coast premieres Thursday at 9 p.m. EST/8 p.m. CST on HGTV.

For more from Christina Anstead, pick up the latest issue of PEOPLE, on newsstands Friday.

Related posts:
23/05/2019 Family Health Comments Off on How Christina Anstead Told Husband Ant She Was Pregnant: 'I Chucked the Test in His Coffee Cup!'
Categories
Recent Posts