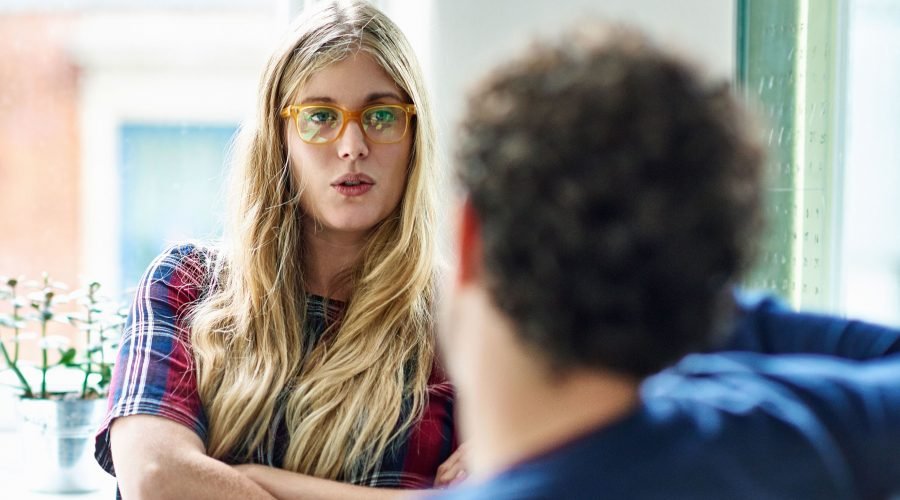 Giving advice without being condescending has always been an art. But advice-giving has become even more fraught since 2008, when writer Rebecca Solnit brought us the term “mansplaining,” which referred to men delivering lengthy, unsolicited explanations to women about things they are likely already familiar with.

I think we threw the baby (informed, well-intentioned advice) out with the bathwater (mansplanations of the birth canal or, in the case of Solnit, her own books.) For me, one of the best things about being in a relationship is having someone around to be the rational one when I’m irrationally stressed. But there’s a time to advise and a time to sit very still and let your partner’s complaints wash over you, and knowing the difference can remove a lot of stress from your relationship.

Every day, across the nation, couples are having some variation of the same fight:

Her: Do not mansplain my own job to me!

Him: I was just giving advice!

Her: I didn’t want advice, I just wanted you to listen!

Him: Well if you’re complaining about a problem, I’m going to try to fix the problem!

Her: I wasn’t complaining, I was venting!

And so on, louder and louder, until they’re both sitting as far apart as you can possibly sit on a loveseat, pretending to watch Billions but really seething.

To understand how to give advice without man-vising, it’s helpful to understand why we feel compelled to give it at all. I took that question to Dr. Peter Pearson, a marriage counselor who co-founded The Couples Institute with his wife, Dr. Ellyn Bader, in 1984. (That Pearson and Bader remain married after so long working together is very reassuring, like when your dentist has incredible teeth.) Sometimes, Pearson says, we really do give advice just to be helpful: Maybe our advice was solicited, or maybe we have a unique expertise in the situation. Other times, we give advice to “stop our own empathic distress”: When someone is describing a distressing situation to you, Pearson explains, that distress is contagious, so we give advice in the hopes that “if I can get you to feel better, then I will feel better.”

Often, we give advice just because it makes us feel valuable in our relationship. In one of a series of studies on the effects of giving and receiving advice, researchers from MIT asked unemployed people to give advice on job-seeking to other unemployed people. 68 percent of people reported that giving advice made them feel more motivated and confident than receiving advice. In another experiment, the researchers assigned 318 middle school students the role of advice-giver or advice-receiver. The advice-givers spent 38 percent more time on their homework. Dishing out wisdom gives us a little self-esteem boost.

Make sure you’re clear on what’s expected of you before you dive in with your opinion.

The trick, then, is in knowing when you’re giving advice for your own sake—to soothe yourself—and when you’re giving advice for your partner’s sake. Pearson says that the easiest way to do that is to ask. When someone is complaining, he says, you should make sure you’re clear on what’s expected of you before you dive in with your opinion. “You’ll know what’s expected by asking: ‘What kind of response would be helpful to you right now?’ And then listen for the answer”—and this is critical—”and actually do what they suggest.”

Pearson says it’s also important for the complainer to know what they’re expecting. (I’m very bad at this.) “If you’re feeling bad, and you want to talk to your partner, figure out ahead of time what response you would like. Do I want reassurance? Do I want to vent? Maybe I just want a hug!”

Even when you’ve been given the green light to advise, you should still tread lightly. Pearson says condescending advice usually starts with “You should…” or “Why don’t you…” Those are very parental phrases, Pearson explains, “It triggers all the times we got unwanted advice growing up.” It’s true that “Why don’t you” sends me into an immediate rage: “Do you THINK I am so STUPID that I have not already DONE that?” Instead, Pearson recommends starting in with “You might consider doing X,” or “Have you considered doing Y?” Those phrases allow the advice recipient to save face.

In theory, once you’ve been in a relationship long enough you should be able to intuit each other’s advice needs. Until then, ask.