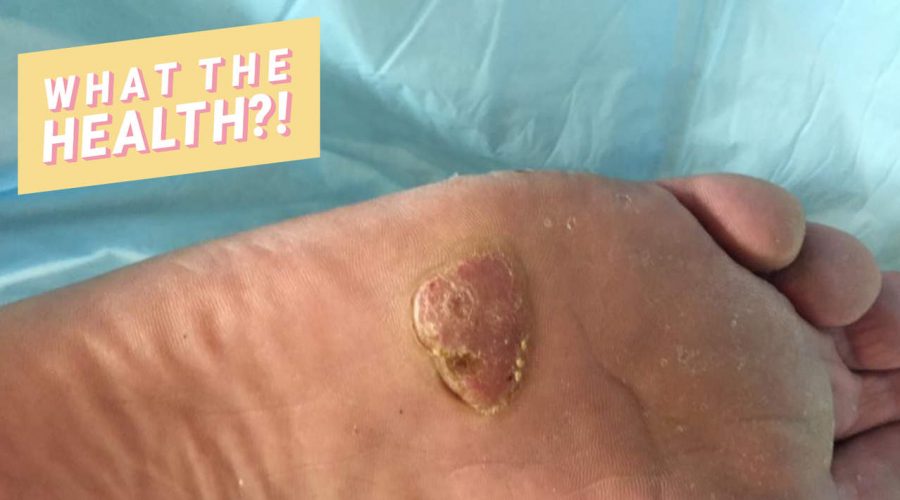 Many people have gotten into the habit of scanning their bodies to check for unusual-looking spots on their skin every so often. Even a cursory scan can be beneficial, alerting you to spots under your arms or on the insides of your legs that might have looked like normal freckles last week but have since changed color or shape. A scary new report in the Dermatology Online Journal reminds us that those quick scans are worth doing consistently.

The report features the case of a patient in his 50s who thought he had a wart on the bottom of his foot for 20 years. He went to the doctor after noticing that it had turned light pink and started growing. Nothing else about the spot was unusual. He hadn’t experienced any pain or bleeding at the site of the spot, and, aside from what he thought was a wart on his foot, he was otherwise in good health.

“It was treated as a wart with liquid nitrogen and silver nitrate by a podiatrist while [the patient] was living in Europe, and the lesion continued to grow into a larger protruding growth,” the report explains.

After the wart treatment, the patient moved to the U.S., where he saw a different podiatrist who performed a biopsy of the lesion. The patient was then referred to a dermatologist. Eventually, he was correctly diagnosed with an amelanotic acral lentiginous melanoma, an extremely rare form of skin cancer.

Only 5% of all melanomas are acral lentiginous melanomas, which can appear under your nails, on the palms of your hands, or on the soles of your feet. Only 2 to 8% are amelanotic melanomas, which tend to be skin-colored or red and somewhat symmetrical. “Amelanotic acral lentiginous melanomas are even less common and can often be mistaken for other clinical entities,” the report says. Non-melanoma skin cancers and warts are among the incorrect diagnoses patients who have this type of melanoma frequently get.

Once the patient was correctly diagnosed, a biopsy revealed that melanoma, the most dangerous type of skin cancer, was in four of his lymph nodes. He was treated with a type of immunotherapy drug called an interferon and stayed stable for more than two years, until his doctor found that the cancer had spread to his foot and right thigh.

The report’s authors note that the case stresses the need to consider getting a skin biopsy if you notice the presence of a spot on your skin that doesn’t seem quite right. Just because it looks and feels like a wart doesn’t mean it always is.

For the rest of us, many doctors promote monthly self-checks just to make sure everything looks good. “A skin self-exam is best done in a well-lit room in front of a full-length mirror. You can use a handheld mirror to look at areas that are hard to see, such as the backs of your thighs,” the ACS says. While you’re at it, you might want to ask a family member or close friend to check your back and scalp from time to time. We’re guessing that from now on you won’t forget to keep an eye on the bottoms of your feet.

Get more on melanoma here.

Related posts:
28/03/2019 Health News Comments Off on This Man Discovered the 20-Year-Old Wart on His Foot Was Actually Skin Cancer
Categories
Recent Posts