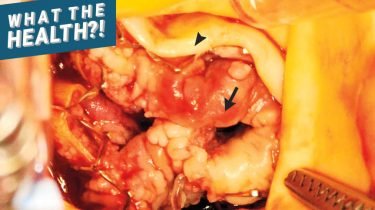 Warning: Put down your lunch before reading this. You’ve probably never seen an image of a yeast infection blocking a heart valve—and it’s a sight.

Newly detailed in today’s New England Journal of Medicine is the case of a 76-year-old man with a history of congestive heart failure, a condition when your heart is too weak to pump blood as it should. The patient went to the emergency room reporting shortness of breath that was getting worse.

As doctors from University Hospital in Bern, Switzerland, detail in the NEJM case report, nine months prior, the man had had a surgical procedure called a transcatheter aortic-valve replacement, which is intended to repair a damaged heart valve by placing a prosthetic valve within the existing valve.

When doctors examined the man, they also found that he had a temperature of 102.2 degrees Fahrenheit, and a cardiac exam revealed a systolic heart murmur, sounds that are made when the heart contracts. These sounds are graded on a scale of one to six—six being the loudest. His was a five.

After a chest X-ray, doctors suspected the patient had pulmonary edema, when the lungs have excess fluid. But when they got the lab results back from his bloodwork, they saw he had a high white blood cell count (meaning there are a lot of disease-fighting cells coursing through the body) and high levels of C-reactive protein, which is a marker for inflammation. Blood tests revealed the problem: a type of yeast called Candida parapsilosis.

Additional tests showed “a large vegetation causing substantial obstruction” of the valve, the case study authors wrote. You can see this blockage in the photo below, which is rather remarkable.

The patient’s condition, called prosthetic valve endocarditis, happens when a prosthetic heart valve becomes infected, something that occurs in up to 2.3% of patients annually and can be deadly. Shortness of breath can mean a lot of different things—and this man’s situation was unique in that he had a prosthetic valve—but this case is a reminder of just how serious that symptom can be (and why it should be checked out by a doctor ASAP).

The patient was treated with antifungal drugs for the yeast infection and underwent surgery to replace the valve. Unfortunately, his struggles didn’t end there. The man had a wound infection after surgery, and four weeks after leaving the hospital, he was readmitted with pneumonia. He later died after being hospitalized for two months.

Related posts:
04/01/2019 Health News Comments Off on This Man Died After a Yeast Infection—in His Heart
Categories
Recent Posts