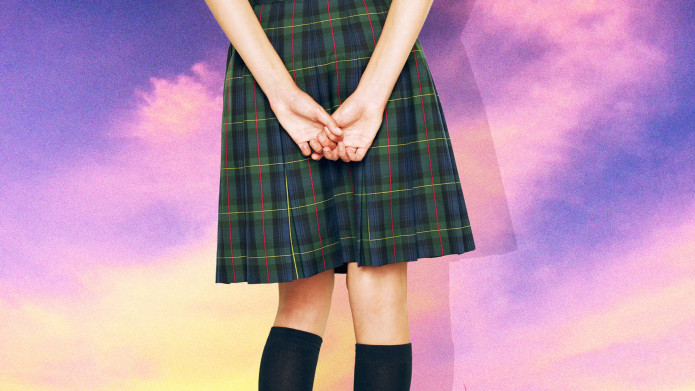 WTF: An eighth grader was just reported for an “inappropriate”…sweater. No, it didn’t have nasty words or imagery on it. This particular (oversize, kinda frumpy, H&M) sweater was flagged “inappropriate” by a teacher due to a possible belly button sighting. *Gasp!*

Funny how we don’t hear about these “inappropriate” dress code infractions on male students. Nope, it’s almost always a young girl who’s being called out for wearing perfectly acceptable clothing.

In this case, Samantha Wilson, 13, of Irvington Middle School in Westchester County, New York, had already worn the $20 H&M garment in her yearbook photo. That didn’t stop Wilson from being dragged out of her third-period science class to the assistant principal’s office, where she was chewed out for 30 minutes about her “inappropriate” outfit (the sweater and high-waisted leggings: pretty much the uniform of most teen girls and also pretty much the only options available at the local mall).

“I was told it was a distraction to the boys, and that my midriff and bra strap were visible,” Wilson told The New York Post. Wilson said she was stunned by the dress code shaming and that her sweater might only reveal a bit of belly if she raised her hand too high in class.

“It felt like a personal hit on me and my clothing style,” she said. Wilson finished the school day — swear to God — wearing an overcoat, the longtime cartoon costume of peeping Toms. Can’t make this shit up.

Now, Wilson’s family and several hundred supporters have created an online petition to demand that the school revoke its draconian dress code.

If you’re not angry yet, this might do it for you:

“I walked into my next class trying not to cry. But I lost it and I burst into tears,” Wilson said of returning to class in fourth period. “When [that] teacher asked why I was crying, my friend said I was dress-coded. The teacher said, ‘She deserves to be.’ He said that in front of my entire class.”

“She deserves to be.” Welcome to The Handmaid’s Tale.

The Irvington Middle School dress code — according to the school’s handbook — is meant to “help promote an environment focused on learning” and “extremely brief garments are not permitted…  including garments in which any midriff skin is easily exposed.”

“It’s basically just like every other sweater. I’ve worn it to auditions before, because I thought it looked nice,” said Wilson, a theater student.

Wilson’s older sister, Cydney, 17, is a senior at Irvington High School — and she borrowed the offending sweater for a college interview last autumn. On Wednesday night, Cydney launched the Change.org petition, which had 530 signatures as of this morning.

Cydney Wilson was dress-coded at the middle school too for a layering piece — a camisole she was told showed too much of her back. “This is definitely a long-standing problem in our district,” she said. “Some teachers need sensitivity training.”

The petition is gaining ground. Online comments reflect support for change in the system. “Treating girls this way at such a critical age of development has a lasting impact on their self-esteem well into their adulthood,” wrote one signer.

Irvington Schools Superintendent Kristopher Harrison said in a statement, “School dress codes are never easy and we know that fashion sometimes conflicts — still, we want to get it right and we will be working with our students and stakeholders to do just that.” Our students and “stakeholders”? Who has a “stake” in this but the girls who are shamed regularly for the very clothing that is sold in every teen apparel store?

No doubt. We’ve had it up to our exposed belly buttons with this bullshit. Let’s stop curating dress codes based on the male gaze — and instead teach everyone to keep their eyes and their hands to themselves — including teachers and administration.

Related posts:
05/02/2019 Kids Health Comments Off on This Teen Was Body-Shamed for the Most Ridiculous Reason
Categories
Recent Posts