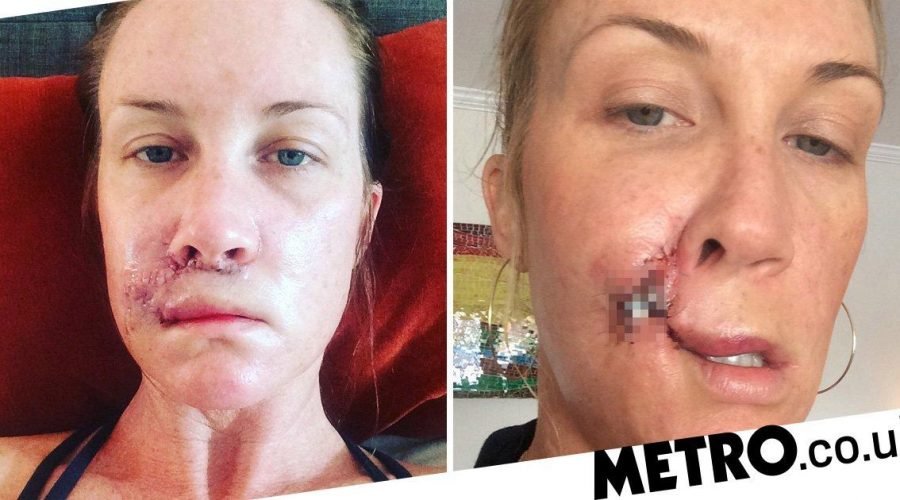 The surgery she had was meant to take an hour but ended up taking more than five hours because more tissue needed to be removed, resulting in scarring and a misshapen lip.

When she woke up from surgery, Kory’s first question was whether she now looked like Kylie Jenner.

She has had two corrective surgeries since where the bottom of her nose was cut and moved closer to its natural position, and the corner of her lip was cut to create mobility for her upper lip, so she can eat and talk.

‘I woke up five and a half hours later after five frozen sections and half my lip was gone,’ she said.

‘I knew it was bad when I noticed little mobility in my mouth while trying to ask the nurse if I looked like Kylie Jenner.

‘Her facial expression to that question led me to the conclusion that it wasn’t good.’

Since her corrective surgeries, Kory was also given a chemotherapy cream to kill off any SCC cancers. She had a painful reaction as the cream dried her skin out considerably, but its use in reducing the cancer cells was successful.

Kory now wants others to take skin cancer more seriously after learning how easily this could have been avoided if she protected her skin when she was younger.

‘My features will never return to normal, unfortunately. I have a huge scar, an oddly shaped lip, I dribble, have speech issues and I have nightmares of being on the surgical table,’ she added.

‘If I could only go back. I can’t and I know that, but it kills me to think about how avoidable this is. I am now sharing awareness of skin cancer and skin checks.

‘I will always miss wearing red lipstick and I’ll always regret not kissing my husband more.

‘Skin cancer needs to be taken seriously. I want everyone to know that SCC can be deadly so don’t avoid the doctor. My goal is to have skin checks be included with our annual checks like breast, colon, pap, teeth, eyes and so on.’

MORE: Sunbeds are ‘death machines that cause cancer and should be banned’

MORE: Woman won’t stop tanning despite getting skin cancer on her face