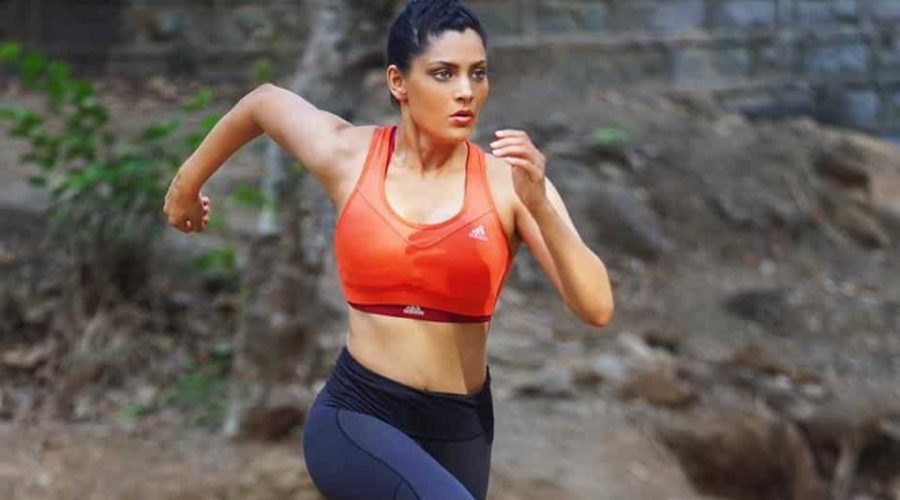 I have had the good fortune of growing up in Nasik, a small town close to Mumbai. As a child playing outdoors, going on treks or trails & swimming in lakes was an everyday phenomenon. When I was in school I pursued professional badminton and cricket which is why running was an intrinsic part of my routine. I shifted to Mumbai for college and got into St. Xaviers College on a sports quota. I ended up representing my college in all of nine sports. By this time, however, modelling took precedence. I stopped training for badminton & wasn’t playing professionally.

Playing sports was always an integral part of my existence and unfortunately, in a big city, I found it tough to gather people to play a sport. That’s when I took to running. Running is a sport where you don’t need company or infrastructure or equipment. You need to put on a pair of good shoes and just start! I had never participated in a race but it was on my bucket list to do a full marathon. When I was shooting in Ladakh for my debut film Mirzya, I would walk back to my hotel which was around 3 kilometres. Gradually over the span of a month, I used to do a slow jog. This altitude training really helped me. When I got back to Mumbai I did a 16k without any effort! That’s when I seriously started prepping for my full marathon. So post the shoot schedule, I had 3 months to the Mumbai Marathon. I went online, created a training plan for myself and pushed myself to live up to that calendar every single day.

Training for a full marathon involves a big change in your lifestyle itself. Because you need to sleep early or watch what you eat, very often your friends end up getting annoyed that you keep cancelling plans. I had written out on a big chart paper “42KMS”, and put it in front of my bed so I would see my goal every time I went to bed and woke up. I had stopped meeting friends who discouraged me. Surrounding yourself with people who give you a positive reinforcement is very important. Training and completing the full marathon at the age of 24 has probably been my biggest achievement in life. It’s a battle with your mind and you get to know yourself so much better because you end up spending so much time with yourself. Post that I’ve been addicted to running and I have run a whole lot of races all over.

I would like to share with my co-runners and aspiring marathoners what I’ve learnt in my journey so far. As an amateur distance runner, you need to have a very strong ‘why’. Why are you doing this? Once you have that answered half the battle is won. Because you need to have strong will power to run marathons. I personally need goals to keep myself motivated. So I keep doing 10K or 21K races around the year. I like to train alone and listen to music but on days when I am demotivated. I also think that it is nice to have a running group or running partner to help you run. Mixing up your training with a sport helps me break the monotony. Another very important thing is to include strength training and stretching to avoid injury in the long run. Also running with the correct pair of shoes is very important if you want to run injury-free. I really enjoy running in the adidas Ultra Boost and I am looking forward to wearing the new 2019 Ultra Boost shoes in my coming races.

I am so glad the running culture in India is growing so rapidly. Keeping you physically fit is just one aspect to it but running keeps you mentally fit. In a society where depression is on the rise, I believe running is the answer. It’s my mission to convert non-runners into runners and I hope there comes a time, where instead of staying let’s catch up for a drink people will start saying let’s catch up for a run!

Saiyami has run in the previous silhouette of the Ultraboost shoe from adidas and strongly recommends the new UltraBoost 19 to all serious runners across the globe for their running journeys. The Ultraboost 19 was deconstructed and reconstructed from its original from 17 pieces to focus on four key components – Optimized boost, Torsion spring, Primeknit 360 and 3D Heel Frame.