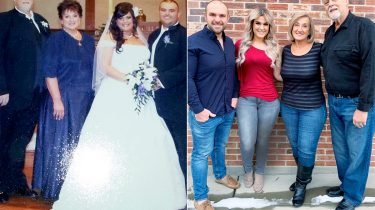 Sarah Bentley and her husband Dave used to eat out for every meal. Breakfast consisted of bagels and cream-filled coffees, then they would eat nothing all day and binge at night on chicken finger subs, Chinese food, chicken wings and pizza. And for dessert, they’d share “a gallon or two of ice cream every single night.”

“I was tired,” Sarah, 31, says. “I was always sitting at home or watching TV. Dave and I are very outgoing, happy people on the outside, but we were super uncomfortable in our skin.”

In January 2014, Sarah was ready to make a change. So when a friend told her about a health and wellness company called Advocare, she decided to sign up.

Sarah started on Advocare’s 2040 Jumpstart program, and immediately lost weight. Instead of her irregular, junk-filled meals, she was eating clean, unprocessed foods like egg white scrambles with avocado and vegetables, chicken salads and cauliflower rice stir-fries.

“I learned how to properly meal prep and eat and fuel my body,” she says. “It was the energy, in the way that I felt, that’s why I decided to continue on.”

Dave was “skeptical” at first and didn’t want to try the program, but then he “watched Sarah transform before my eyes,” he says. “Her energy level, the way that she was eating and carrying herself; literally she inspired me to start.”

Sarah’s parents, Debbie and Steve Hoffman, were also following her progress. They too were overweight, with Debbie at 299 lbs. and dealing with rheumatoid arthritis, and Steve at 410 lbs. — morbidly obese and pre-diabetic.

Debbie and Dave both started four months after Sarah, in April, and Steve, 66, joined in a few months later. Sarah’s now lost 110 lbs., Dave is down 137 lbs., and Debbie and Steve have lost 119 lbs. and 121 lbs. respectively. In total, the Bentley and Hoffmans have dropped 487 lbs.

They’re now doing activities they never thought they could. Dave and Sarah are into CrossFit and love to hike with their two kids. Steve recently remodeled their house in Buffalo, while Debbie walks five miles a day and goes on long bike rides

“I got back the quality of life I never thought with rheumatoid arthritis that I would ever have again,” Debbie says. “I feel fantastic. I really do.”

Plus, she says, “it seems to have really brought us even closer together as a family. We do so much together now.”

Related posts:
02/01/2019 Health News Comments Off on How One Woman Inspired Her Family to Lose Weight Together — and to Drop a Total of 487 Lbs.!
Categories
Recent Posts