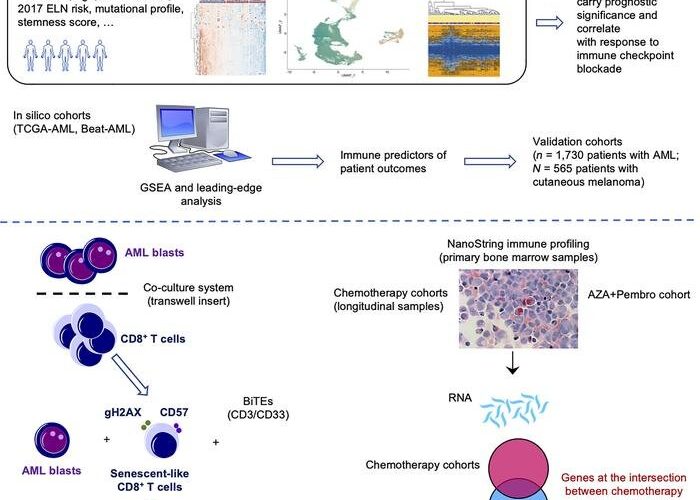 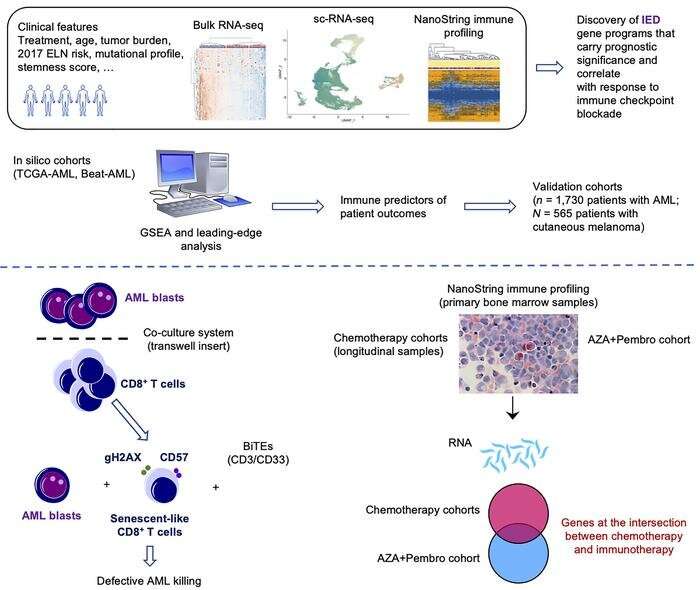 Scientists at Nottingham Trent University and John Hopkins Kimmel Cancer Center in the U.S. found that as a result patients with acute myeloid leukemia (AML) are often unlikely to respond to treatment.

AML progresses quickly, is very difficult to treat and has a high relapse rate—just one in five patients survive beyond five years of their diagnosis.

The team studied tumor samples from almost 2,000 patients with AML along with a wide range of existing data, finding that cancer cells promoted aging and exhaustion of the immune system, a process known as senescence.

As part of the study, the researchers identified a genetic signature of immune dysfunction and they were able to distinguish between high and low levels of tumor-induced exhaustion.

They found that the survival rates of people with highly exhausted immune cells and who had undergone chemotherapy was on average more than seven months shorter than that of those with low levels of cell exhaustion.

And patients with highly exhausted immune cells had been less likely to respond to immunotherapy than other patients, surviving for just over four months while those with low levels of exhaustion survived for more than 15.

While immunotherapy—the process of using a person’s own immune system to fight cancer—is a standard treatment for many forms of cancer, the researchers argue that immunotherapies have so far yielded disappointing results for patients with AML.

It is hoped that, as well as better predicting which patients will respond better to treatment, the work could pave the way to finding novel ways of reinvigorating the immune system and tackling the poor function of the immune cells responding to AML.

It could also lead to the development of more personalized treatments for those patients who are most likely to benefit and can stay in remission, the researchers say.

“The immune system does not work as it should in patients with acute myeloid leukemia,” said Professor Sergio Rutella, Director of the John van Geest Cancer Research Center at Nottingham Trent University.

He said, “We have found that immune cells are functionally exhausted and that this associates with poor response to treatment. Although many patients have had their lives extended using drugs that act on immune cells, oncologists need to better predict who will respond and why.

“There is an urgent need to move away from a one-size-fits-all approach and to develop more rational biology-driven therapies that take a patient’s own genetic make-up into consideration.”

The researchers hope that the knowledge gained from the AML study could cross-fertilize efforts on other blood cancers that are known to derive benefit from immunotherapy, including lymphoma, as well as solid tumors. The study showed, for instance, that a specific set of immune genes originally identified in patients with AML can effectively predict patients with melanoma who would respond to immunotherapy.

The study, which also involved Children’s Hospital of Philadelphia, Technische Universität Dresden in Germany and the Princess Margaret Cancer Center in Canada, is published in the Journal of Clinical Investigation.