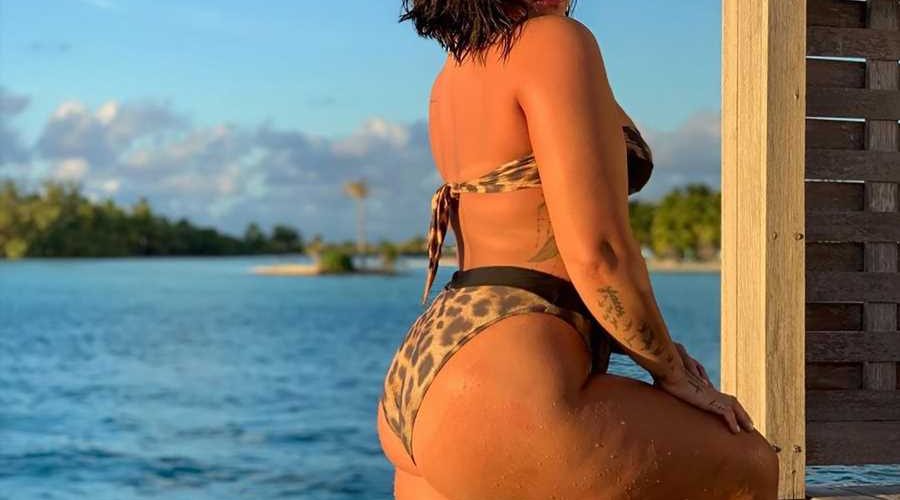 Demi Lovato is confident — and she’s not sorry about it!

On Thursday, the singer, 27, showed off her unedited body in a sexy leopard-print bikini snap on Instagram. The image, which was taken during her summer getaway to Bora Bora, saw Lovato looking over her shoulder as she wades in knee-deep water while featuring her backside.

Though Lovato appeared to embrace her body in the steamy shot, the star revealed it actually took a lot for her to post the snap without editing her appearance, as she has a “fear” of exposing the cellulite and imperfections of her body to the world.

Lovato even admitted that the fear has prompted her to alter previous bikini photos from her Bora Bora vacation, but said that she realized she was tired of attempting to live up to unrealistic standards of beauty.

“This is my biggest fear. A photo of me in a bikini unedited. And guess what, it’s CELLULIT!!!!” she wrote. “I’m just literally sooooo tired of being ashamed of my body, editing it (yes the other bikini pics were edited – and I hate that I did that but it’s the truth) so that others think I’m THEIR idea of what beautiful is, but it’s just not me.”

“This is what I got,” Lovato proudly stated. “I want this new chapter in my life to be about being authentic to who I am rather than trying to meet someone else’s standards.”

“So here’s me, unashamed, unafraid and proud to own a body that has fought through so much and will continue to amaze me when I hopefully give birth one day,” she continued, seemingly referencing her battles with addiction, mental illness and disordered eating, as well as her near-fatal overdose in July 2018.

Lovato went on to share what a relief it’s been to be back in front of the screen without worrying about her weight and diet.

“It’s such a great feeling to be back in tv/film while not stressing myself with a strenuous workout schedule before 14 hour days, or depriving myself from a real birthday cake rather than opting for watermelon & whip cream with candles because I was terrified of REAL cake and was miserable on some crazy diet s—,” Lovato revealed.

Finishing her post, Lovato, who seemed to anticipate negative comments from some followers about the bikini photo, clarified that she was not completely content with her body, but expressed her appreciation for it anyways.

“Just so everyone’s clear.. I’m not stoked on my appearance BUT I am appreciative of it and sometimes that’s the best I can do,” she wrote. “I hope to inspire someone to appreciate their body today too. 💗”

The star also opened up about the post on her Instagram Stories, writing, “Literally shaking still.. that was so hard for me to post. But wow.. so blown away by the love and support.. let’s be the change we want to see!!!”

RELATED: Demi Lovato Slams Body-Shaming Headline: ‘I Am More than My Weight’

Though she’s had a fear of showing off her body’s imperfections, the star hasn’t shied away from talking about self-confidence on social media.

Last year, Lovato spoke to her battle of overcoming body image issues and an eating disorder in a since-deleted Instagram post.

“I’ve decided I’m letting go of my perfectionism and embracing freedom from self-criticism. Learning to love my body the way it is is challenging but life-changing,” she wrote. “Today I’m feeling strong. You all can do it too. It IS possible.”

This past April, the singer proved she had gotten even stronger when she fought back on her Instagram Stories after spotting a headline that said she now has a “fuller figure.”

Sharing a screenshot of the article to her Instagram story, Lovato added, “I AM MORE THAN MY WEIGHT.”

“Unlike the past, I’m not triggered, I’m not upset that someone wrote a headline about my ‘fuller figure.’ I’m angry that people think it’s okay to write headlines about people’s body shapes,” she wrote. “Especially a woman who has been so open about being in recovery from an eating disorder. I’m not upset for myself but for anyone easily influenced by the diet culture.”

Lovato also urged her followers to ignore comments about their bodies.

“Too many people today base their ideal body weight off of what OTHERS tell us we should look like or weigh. Articles like these only contribute to that toxic way of thinking,” she said. “If you’re reading this: Don’t listen to negative diet culture talk. You are more than a number on a scale. And I am more than a headline about my body shape.”

In the time since then, Lovato has been “very focused on staying healthy” as she works on her upcoming record (which will be her seventh studio album and first since 2017) and continues to train in boxing and jiujitsu, a source told PEOPLE in July.

Between visits to the recording studio, the singer also “goes for hikes with friends and takes boxing class [in Los Angeles],” said the source.

Besides staying physically fit, Lovato has also committed to her mental well-being and recently showed off a new ink of the word “me” tattooed on the inside of her finger, which she explained will serve as her “forever reminder” to put “me first.”

Related posts:
06/09/2019 Health News Comments Off on Demi Lovato Shares Unedited Bikini Photo as She Celebrates Her Cellulite 'Unafraid and Proud'
Categories
Recent Posts
We and our partners use cookies on this site to improve our service, perform analytics, personalize advertising, measure advertising performance, and remember website preferences.Ok