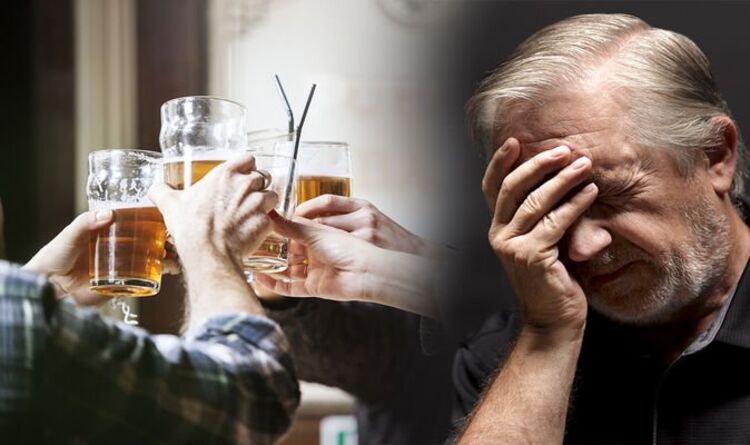 This Morning: Dr Zoe explains ulcers after coffee and alcohol

In a study published in Nature Communications, associations between alcohol consumption and grey and white matter volumes in the brain were further investigated.

The study involved 36,678 generally healthy middle-aged and older adults from the UK Biobank.

The study found that the more a person drinks the smaller their brain and that there was less connectivity in the brain’s white matter.

“There is some evidence that the effect of drinking on the brain is exponential,” said Dr Remi Daviet, the study’s first author.

He added: “So, one additional drink in a day could have more of an impact than any of the previous drinks that day.

“That means that cutting back on that final drink of the night might have a big effect in terms of brain ageing.”

The research showed a negative association between even one drink a day and brain volume and the link grew stronger the greater the level of alcohol consumption.

In 50-year-olds, increasing average drinking from one alcohol unit (half a pint of beer) a day to two units (a pint of beer or a glass of wine) was associated with changes in the brain equivalent to ageing two years.

Going from two to three alcohol units at the same age was like ageing three and a half years.

In other studies, alcoholics have exhibited brain shrinkage and deficiencies in the white brain matter that carries information between cells.

Even in the short term, alcohol affects areas of the brain controlling cognitive and motor functions, causing them to slow down.

Alcohol consumption is one of the leading contributors to the global burden of disease and to high healthcare and economic costs. Alcohol use disorder (AUD) is one of the most prevalent mental health conditions worldwide with harmful effects on physical, cognitive, and social functioning.

Chronic excessive alcohol consumption is associated with direct and indirect adverse effects, including (but not limited to) cardiovascular disease, nutritional deficiency, cancer, and accelerated ageing.