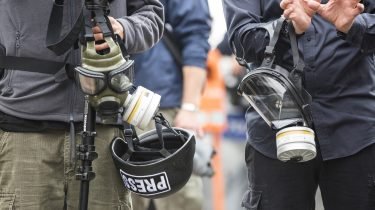 A team of researchers from the University of Washington, the Army Medical Research Institute of Chemical Defense and Texas A&M University has developed a nanoscavenger that is capable of protecting mice against nerve agent attacks. In their paper published in the journal Science Translational Medicine, the group explains how they came up with the nanoscavenger and how well it worked during testing.

Chemical weapons became infamous during the First World War as armies used them against one another during trench warfare. Since that time, international bodies have tried to convince countries to ban such agents during wartime because of their horrible impact on the human body. That has not deterred terrorist groups or governments such as those in Syria from using them, however. Because of that, scientists have been working diligently to develop a pre-treatment that would protect people exposed to organophosphates—the deadly component in nerve agents. As part of such research, scientists have attempted to develop what they describe as prophylactic “scavenging” molecules that both track down nerve agent components and then neutralize them. Until now, progress has been slow. Compounds developed have tended to degrade in the body too quickly to be effective. In this new effort, the researchers report that they have developed a nanoscavenger that proved to be effective in protecting rats and guinea pigs.

The new nanoscavenger was made by wrapping an enzyme that targets organophosphates in a polymer gel coating. The particles that resulted were nano-sized, which made them small enough to go undetected by the immune system, allowing them to remain in the body long enough to neutralize nerve agents.

The researchers report that when they injected rats with the nanoscavenger, it induced immunity to nerve agent attacks for up to five days. And there were no known side effects. Guinea pigs given injections of the nanoscavenger were protected for up to eight days.