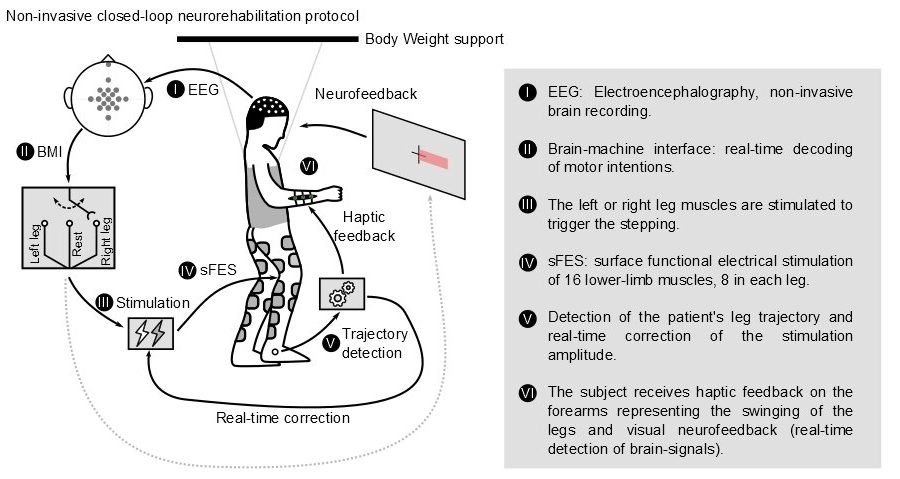 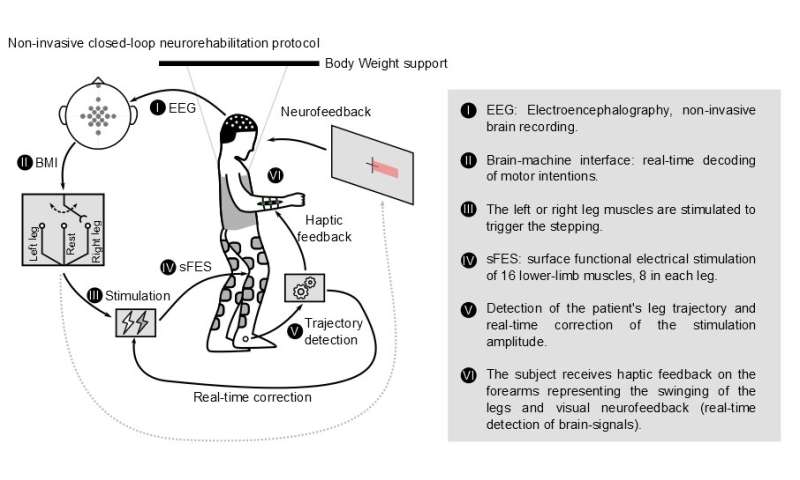 In another major clinical breakthrough of the Walk Again Project, a nonprofit international consortium aimed at developing new neurorehabilitation protocols, technologies, and therapies for spinal cord injury, two patients with paraplegia regained the ability to walk with minimal assistance, via a fully non-invasive brain-machine interface that does not require the use of any invasive spinal cord surgical procedure. The results of this study appeared in the May 1 issue of Scientific Reports.

The two patients with paraplegia (AIS C) used their own brain activity to control the delivery of electrical pulses to a total of 16 muscles (eight in each leg), allowing them to produce a more physiological walk than previous efforts, requiring only a conventional walker and a body weight support system. Overall, the two patients were able to produce more than 4,500 steps using this new technology, which combines a non-invasive brain-machine interface based on a 16-channel EEG to control a multi-channel functional electrical stimulation system (FES). The system is tailored to produce a much smoother gait pattern than previous methods.

“What surprised us was that in addition to allowing these patients to walk with little help, one of them displayed clear motor improvement by practicing with this new approach. Patients required approximatively 25 sessions to master the training before they were able to walk using this apparatus,” said Solaiman Shokur one of the authors of the study.

The two patients that used this new rehabilitation approach had previously participated in the long-term neurorehabilitation study carried out using the Walk Again Project Neurorehabilitation (WANR) protocol. As reported in a recent publication from the same team (Shokur et al., PLoS One, Nov. 2018), all seven patients who participated in that protocol for a period of 28 months improved their clinical status from complete paraplegia (AIS A or B, meaning no motor functions below the level of the injury, according to the ASIA classification) to partial paraplegia (AIS C, meaning partial recovery of sensory and motor function below the injury level). This significant neurological recovery included major clinical improvements in sensory discrimination (tactile, nociception, vibration, and pressure), voluntary motor control of abdomen and leg muscles, and important gains in autonomic control, such as bladder, bowel, and sexual functions.

“The last two studies published by the Walk Again Project clearly indicate that partial neurological and functional recovery can be induced in chronic spinal cord injury patients by combining multiple non-invasive technologies that are based around the concept of using a brain-machine interface to control different types of actuators, like virtual avatars, robotic walkers, or muscle stimulating devices to allow the total involvement of patients in their own rehabilitation routine,” said Miguel Nicolelis, scientific director of the Walk Again Project and one of the authors of the study.

In a recent report by another group, one AIS C and two AIS D patients were able to walk via an invasive method for spinal cord electrical stimulation, which required a spinal surgical procedure. In contrast, in the present study, two AIS C patients and a third AIS B subject were able to regain a significant degree of autonomous walking without the need for such invasive treatments. Instead, these patients only received electrical stimulation patterns delivered to the skin surface of their legs so that a total of eight muscles in each limb could be electrically stimulated in a physiologically accurate sequence. This was done in order to produce a smoother and more natural pattern of locomotion.

“Crucial for this implementation was the development of a closed-loop controller that allowed real-time correction of the patients’ walking pattern, taking into account muscle fatigue and external perturbations in order to produce a predefined gait trajectory. Another major component of our approach was the use of a wearable haptic display to deliver tactile feedback to the patients’ forearms in order to provide them with a continuous source of proprioceptive feedback related to their walking,” said Solaiman Shokur.

To control the pattern of electrical muscle stimulation in each leg, these patients utilized an EEG-based brain-machine interface. In this setup, patients learned to alternate the generation of “stepping motor imagery” activity in their right and left motor cortices, in order to create alternated movements of their left and right legs.

According to the authors, the patients exhibited not only “less dependency on walking assistance, but also partial neurological recovery, with substantial rates of motor improvement in one of them.” The improvement in motor control in this last AIS C patient was nine points in the lower extremity motor score (LEMS), which was comparable with that observed using invasive spinal cord stimulation.

Based on the results obtained over the past five years, the WAP now intends to combine all its neurorehabilitation tools into a single integrated, non-invasive platform to treat spinal cord injury patients. This platform will allow patients to begin training soon after the injury occurs. It will also allow the employment of a multi-dimensional integrated brain-machine interface capable of simultaneously controlling virtual and robotic actuators (like a lower limb exoskeleton), a multi-channel non-invasive electrical muscle stimulation system (like the FES used in the present study), and a novel non-invasive spinal cord stimulation approach. In this final configuration, this WAP platform will incorporate all these technologies together in order to maximize neurological and functional recovery in the shortest possible time, without the need of any invasive procedure.