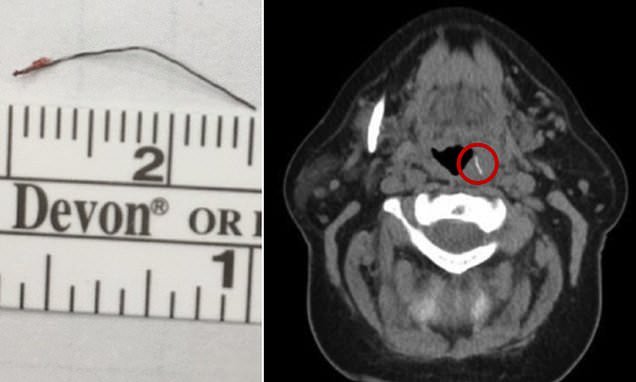 Woman, 63, needed surgery to remove part of a BBQ-cleaning brush from her THROAT after it stuck to a hot dog she ate

A woman needed surgery to remove a metal bristle of a BBQ-cleaning brush from the back of her throat after it stuck to a hot dog she ate.

The 63-year-old went to a hospital emergency room complaining of throat pain and difficulty swallowing for two hours after her meal.

Doctors looked inside her throat and examined it using a camera but couldn’t find anything so they sent her home without treatment.

Her pain carried on for a month, however, and when she went to another hospital for a second opinion they discovered a metal wire was lodged in the back of her throat.

Medics were so concerned about the incident, and others like it, they even said they would support a ban on wire grill brushes. 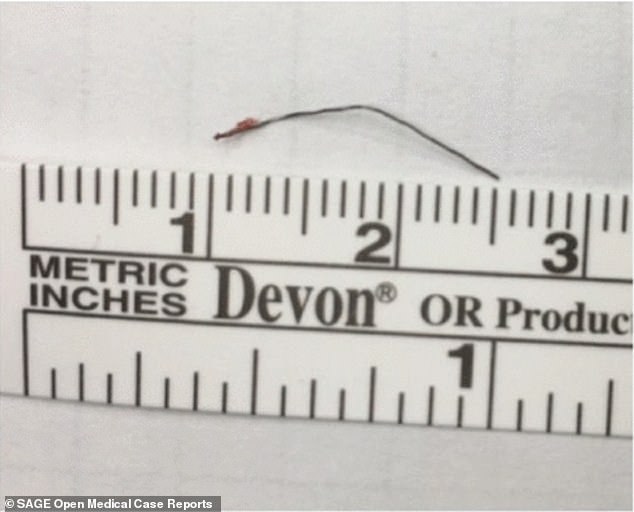 The woman had to go back and forth to hospital for more than a month before medics finally found and removed the 1.5cm piece of metal from the back of her throat

Doctors from the medical school at the University of Michigan revealed the woman’s condition in a case report.

They said that although swallowing objects is a common reason for visiting A&E, incidents involving wire bristles from grill-cleaning brushes are uncommon.

After the woman, who isn’t named, had been sent home from her first hospital visit, it became more and more difficult for her to swallow so she returned the next week.

This time, doctors did a CT scan and saw a ‘curvilinear metallic object’ lodged in the back of her throat.

They took her to the operating theatre and found an abscess on her tonsil but no trace of the metal wire, and X-rays didn’t reveal whether there was anything that could be removed.

Instead, they thought the line showing up on scans was a hardened build-up in an artery in the woman’s neck and they sent her home again.

But the woman returned to hospital for a third time with a constant sore throat and having to clear her throat all the time – and doctors still found nothing.

Desperate for an answer, the woman went to the University of Michigan to be seen by the doctors who wrote her case report.

This time, she was put under general anaesthetic and surgeons investigated inside her throat and found the metal wire – which was more than 1.5cm long – and removed it.

It had broken off the grill brush during cleaning and then stuck to the sausage while it was cooking, before being swallowed, the doctors worked out. 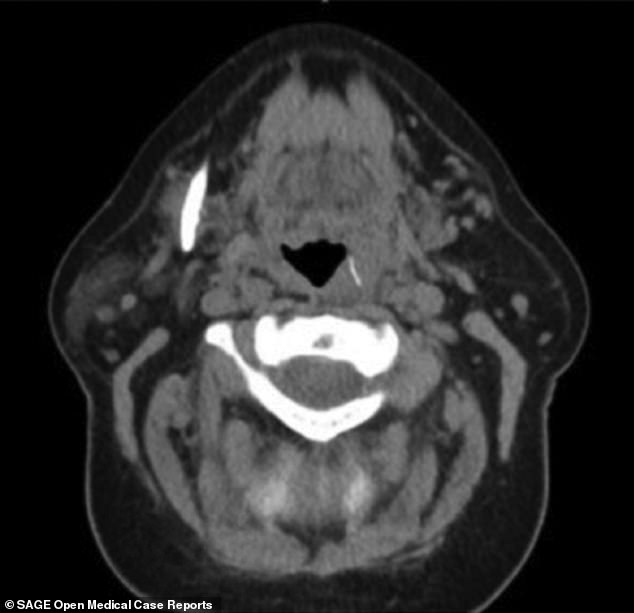 And the medics, led by Andrew Prince, added wire brushes should be avoided and even banned to avoid them getting swallowed when they’re stuck in food.

‘The American Medical Association, Centers for Disease Control and Prevention, and Health Canada have all issued warnings regarding the risks of grill bristle ingestion,’ they said.

‘We support further investigation of the public health risk and possible greater restrictions or a ban on wire bristle grill brushes.

‘We also suggest considering alternative grill-cleaning products, such as a grill stone or scraper, aluminium foil, or liquid grill cleaners to avoid the unintentional ingestion of the wire bristles.’

The report was published in the journal SAGE Open Medical Case Reports.

WOMAN, 50, DIED AFTER GETTING A TOOTHPICK STUCK IN HER THROAT

A man was suspected of murdering his girlfriend until a post-mortem discovered a toothpick had punctured her throat.

Doctors had dismissed the unnamed woman as having a cold when she complained of something jammed in her throat after eating bread and salami.

The 50-year-old, who lived in Coimbra, Portugal, had even been sent for psychiatric testing in case the pain was ‘all in her head’.

Just a day after being given antibiotics for her suspected cold, she was found dead in the bathroom of her and her partner of six years’s home. Her pyjamas were soaked with blood and a wound to her head.

After the family threw around accusations of foul pay, doctors concluded that a toothpick had caused inflammation and the heart to stop. 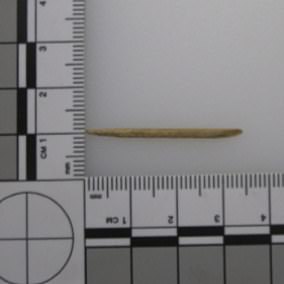 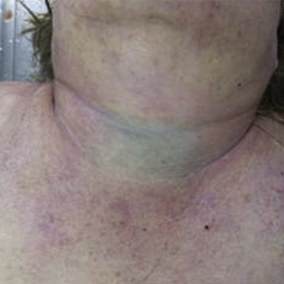 A 3.5 centimetre (1.3inch) wooden tooth pick fragment (left) was found which punctured the woman’s throat, leading to the green discolouration of the skin (right) and interfered with vital nerves causing the heart to stop

During an autopsy, the pathologists noticed the woman had a green colour on the skin around her neck.

After opening up the throat, a 3.5cm wooden tooth pick fragment was found covered in pus alongside two puncture wounds in her throat wall.

Dr César Lares do Santos, a pathologist at the National Institute of Legal Medicine and Forensic Sciences in Portugal, released the report in the Journal of Forensic and Legal Medicine.

Dr Lares do Santos said: ‘Sudden, unexpected or of unknown cause deaths, especially when blood is found at the scene, may give rise to unfounded early speculation.’

The inflammation caused by the toothpick interfered with nerves vital in the control of the brain, heart and lungs, leading to a cardiovascular collapse, the pathologists claimed.

Related posts:
06/06/2019 Health News Comments Off on Woman, 63, got part of a metal grill brush stuck in her throat
Categories
Recent Posts