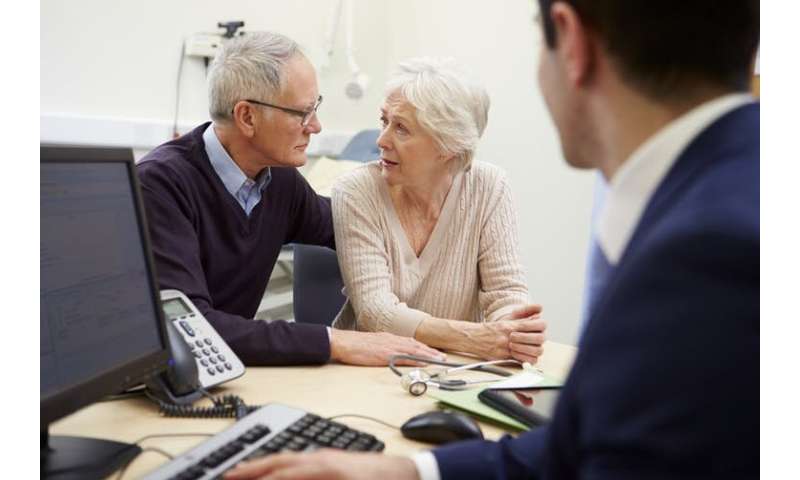 When a person whose communication is affected by a developmental disability (like Down syndrome or autism) needs to speak with a doctor, they often have to rely on a companion to help them. Whether it’s a family member, a friend, or a professional support worker, that companion has to gauge very carefully what to say and when to say it.

These are discussions which may contain extremely intimate and personal information, and they present a clear challenge for companions, patients and doctors who must manage what can be a very delicate interaction.

For there is a clear dilemma at the heart of what the companion should do. On the one hand, they must respect the patient’s right to tell their own story. After all, it’s their body and their life—so they must have priority in the telling.

But on the other hand, what if the patient doesn’t understand the doctor’s question, or gives an unintelligible answer, or one that the companion knows to be incorrect? In those circumstances, the companion may feel obliged to intervene, at the expense of treading on the patients’ toes.

It’s not an easy dilemma to solve—respect for the patient, versus telling the doctor what they need to know.

To look into this further, we have made a close study of a set of video recordings made in surgeries in a large area of southern England. We didn’t want to rely on retrospective interviews for our research, or even on contemporaneous note taking. The conversation analysis approach we use needs video as a record of what actually went on. It shows all the subtleties that people don’t notice at the time, and can’t recall later.

The patients were people classified in the GP surgery records as having a learning disability, and they brought companions of all kinds. Those companions all faced the same dilemma, but dealt with it in different ways.

In fact, there was a clear spectrum of intervention. At one end, it was just a matter of helping the patient discreetly, and at the other, it was a complete take over of the ongoing discussion.

For example, suppose the doctor asks the patient, “When did you have your most recent eye test?” and the patient struggles to answer intelligibly. At the most discreet end of the spectrum of intervention, the companion may wait a little, then turn to the patient, and hint at the answer by saying something like: “Did we go to the optician’s last week?”

That way of intervening implies that the patient does know the answer, but gives them a very strong hint as to what it is. It’s an intervention in the form of a question that expects a simple answer, making it easy for the patient to provide a clear and firm response to the doctor’s question. This is respectful and also gets the job done.

Halfway along the spectrum is the intervention that accepts what the patient has said, but qualifies it significantly. This respects the patient’s right to have at least started the answer, but is a way of adding important information.

The patient may say: “I can walk up the stairs, yeah,” and the companion may add—again speaking to the patient—But sometimes it’s a bit difficult, isn’t it?” Again the job is done. The doctor hears the qualification, and all the patient has to do is agree.

At the other end of the spectrum, the companion decides to effectively take over, even before the patient has started to answer the question. You may think that’s because the patient is particularly uncommunicative—but that isn’t always the case.

Talking (and taking) over

Sometimes, the companion seems to feel that they have more authority in the matter, and are better judges of what to say. It is as if they simply want to add a splash of color to the picture of the patient’s life, even though it’s apropos of nothing in particular: “She loves her soap operas,” was one example; “He liked the other doctor he saw because it was a woman,” was another.

Did the patients ever seem to mind? For whatever reason, very rarely. Perhaps they were used to their companions taking over. But on occasions they did signal their displeasure.

One example was when a monosyllabic patient had to endure her companion jocularly giving the doctor details of her bowel movements. Without much language, there was little the patient could do—but she threw up her arm as if to shield herself from what her companion was saying.

On a more clear cut occasion, an adult patient, fed up with his mother’s wholesale takeover of the conversation, spluttered out: “Oh, do be quiet, Mummy.”

So far, our observations have given us a lot of information about the dilemma that companions face, and how they deal with it. What we can tell doctors is that they too have a part to play. At times, the doctors would subtly (or not so subtly) select the companion as the one to speak next, by a slight shift of eye gaze or body posture, or by simply not following up what the patient said.

Related posts:
23/05/2019 Health News Comments Off on Why a patient may need a companion to speak for them—and the difficult choices they face
Categories
Recent Posts