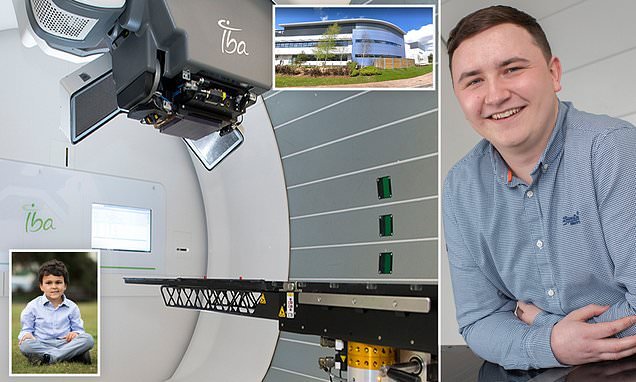 Wales is to become a leading player for offering a pioneering cancer treatment, according to health officials.

Ryan Scott, 23, of Cardiff, who has a brain tumour, was told he would no longer need to fly to the US for the treatment and could have it right on his doorstep.

Proton beam therapy (PBT) gained huge attention in 2014 when the parents of Ashya King, who was then five, were jailed for abduction after removing Ashya from hospital to receive the treatment in Spain.

The NHS have been building centres to fund people in the UK – but experts warn it will be a long time before significant numbers will be treated. 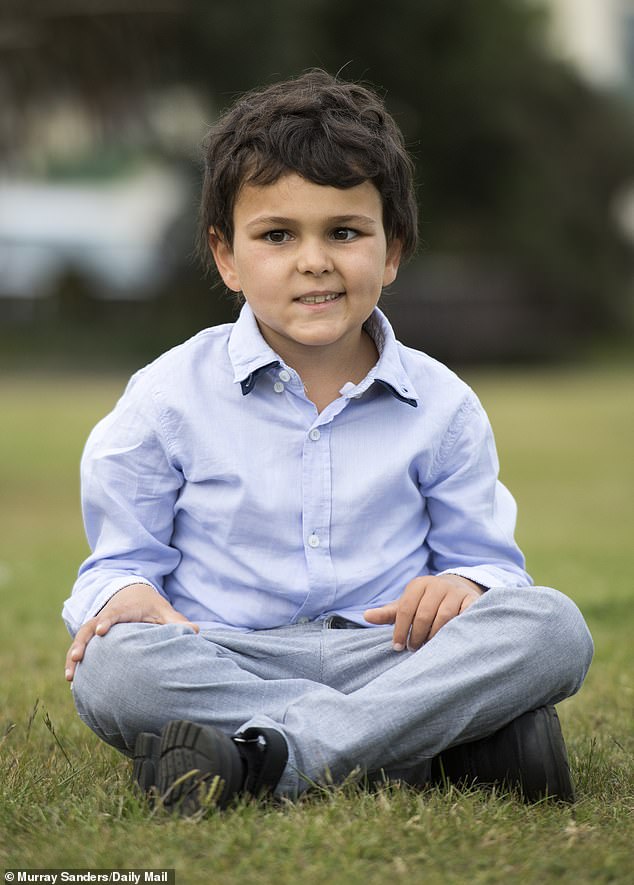 Proton beam therapy famously treated Ashya King, pictured in 2018. In 2014 his parents, Brett and Naghmeh King, were jailed with abduction when they took Ashya out of hospital to receive the treatment abroad 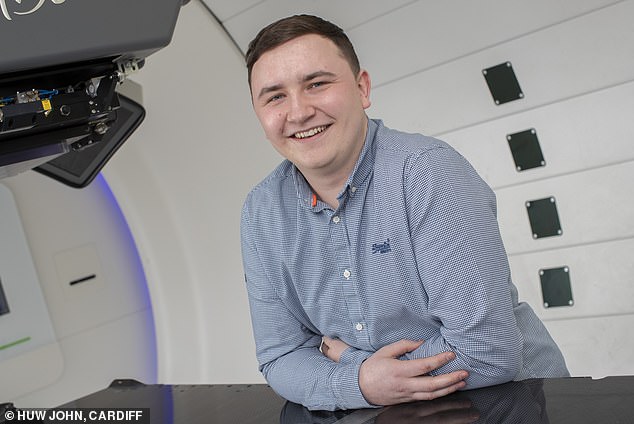 Ryan Scott, 23, of Cardiff, is the first NHS patient to have been treated with proton beam therapy at private clinic The Rutherford Centre in Newport, South Wales 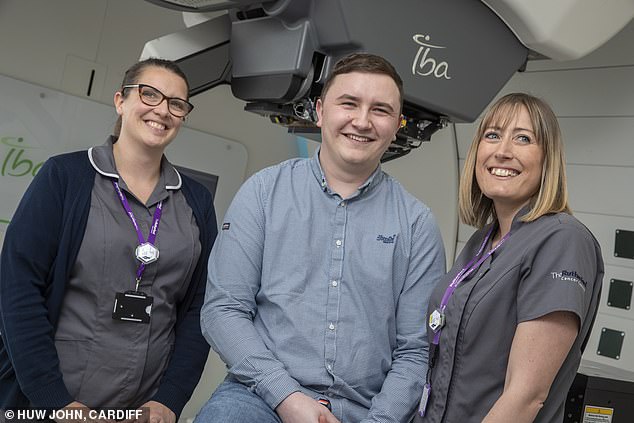 Mr Scott, pictured with staff at the centre, was getting ready to travel to the US for proton beam therapy for a brain tumour before being told he could have it in his home of Wales 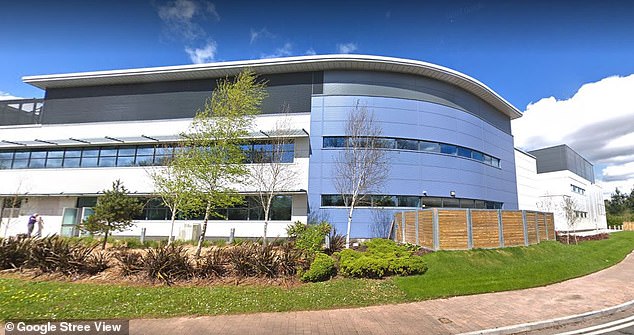 In December 2018, NHS Wales struck a deal that would see adult NHS Wales patients who need PBT treated at the Rutherford Cancer Centre

PBT allows a dose of high energy protons to be precisely targeted at a tumour, reducing the damage to surrounding healthy tissue.

It is beneficial for patients where the cancer is close to a critical part of the body such as the spinal cord or brain.

Mr Scott had a grade 1 cranio  pharyngioma and was about to receive PBT for it in the US – it has been accessible abroad to about 1,000 eligble NHS patients since 2008.

But, in December 2018, NHS Wales struck a deal that would see adult NHS Wales patients who need PBT treated at the Rutherford Cancer Centre.

WHO IS ASHYA KING?

Proton beam therapy drew attention four years ago when the story of Ashya King, who was then five, sparked a fierce debate.

The NHS did not provide proton therapy in the UK, however it has funded treatment abroad since April 2008. But in this case the doctors did not support moving Ashya for therapy.

His parents, Brett and Naghmeh King, were jailed with abduction when they took Ashya to Spain, fearing the radiotherapy recommended by doctors in Southampton treating his brain tumour would turn him into ‘a vegetable’.

The issues about treating the boy were brought to the High Court to be resolved, and on 5 September 2014, the court ruled that Ashya would be allowed to have the therapy in Prague, Czech Republic.

In March 2015, Mr King said that a brain scan showed no evidence that Ashya had a brain tumour.

Now, Ashya is now, a ‘typical young boy’ who loves riding his bike, watching movies and spending time with his family, according to his mother.

Mr Scott was the first patient and said: ‘I was very pleased when my consultant recommended proton beam therapy and told me that it was available close to home in South Wales.

‘I was due to be treated with proton beam therapy over the course of eight weeks in the US, a disruption I was not looking forward to.

‘Happily, however, the agreement between NHS Wales and the Rutherford Cancer Centres was struck just in time for me to be treated a short drive from home.

‘The process of undergoing proton beam therapy was much better than anticipated. There have been hardly any side effects and being able to sleep in my bed after a day’s treatment is a real plus.’

The centre treated the first patient in the UK with PBT in April last year, Simon Hardacre, 56, a company director from Woolaston in Gloucestershire.

Since then, the centre has treated 25 patients.

Today, Vaughan Gething, Minister for Health and Social Services, hosted an official opening as a celebration of its progress.

Mr Gething said: ‘I am delighted to officially open the Rutherford Cancer Centre in Newport today. It was the first facility in the UK to offer proton beam therapy for cancer patients, and an excellent example of the development of new cancer therapies, here in Wales.

‘It’s a perfect illustration of how we are working collaboratively to deliver technological innovations to improve treatment for patients’.

The centre treated the first patient in the UK with PBT in April last year but was officially opened today, April 9. Pictured, the equipment 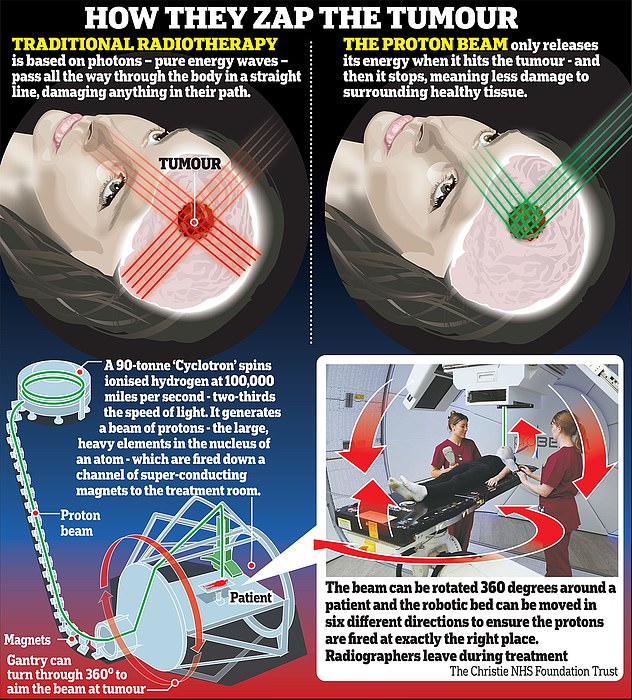 Proton beam therapy allows a dose of high energy protons to be precisely targeted at a tumour, reducing the damage to surrounding healthy tissue

‘Our collaborative partnership with the NHS in Wales means that adult patients have an option to be treated closer to home.

‘Patient demand is increasing and it is encouraging that the UK is beginning to catch up with Europe in the provision of this therapy.’

The NHS has been paying for some patients to have the treatment abroad since 2008, at specialist centres in Jacksonville, Florida, and Oklahoma City in the US, as well as Switzerland, at a cost of around £110,000 per patient.

But now, the NHS opening its own centres, with the first at the Christie Hospital in Manchester last Autumn.

The first patient was treated in December last year, and by the time a second centre is opened in summer 2020, 750 patients will be treated every year.

Eventually, it is expected to benefit 1,500 patients a year.

Despite the a new NHS cancer treatment centres becoming operational, experts have said it will be a long time before more miracle recoveries are made.

Oncologist Jiri Kubes, medical director of the Proton Therapy Center (PTC), which treated Ashya King, said many patients in the UK will still be denied access to the treatment they want.

Dr Kubes said: ‘The demand for proton beam therapy is increasing year on year, with many patients seeking alternatives to the traditional cancer treatment pathways.

‘While the NHS acknowledges the benefits of PBT, and is building its own centres, they will still only be able to treat a fraction of those who might benefit from it, while many people will be turned down for the treatment because of the very limited indication criteria.

‘There’s still a long way to go before patients in the UK have widespread access to it.’

Because of this, growing numbers are willing to pay for the treatment abroad – in 2016, the PTC treated 21 patients from the UK and Ireland.

But by the end of last year, they’d treated 38 patients, each paying the minimum price of the shortest treatment schedule of around £23,000.

The main barrier for development of centres in the UK has been the enormous cost of the equipment. The NHS centres in Manchester and in London in 2020 are reported to have cost £250 million.

Proton beam therapy is a form of radiotherapy and, like all radiotherapy, it works by damaging cancer cells’ DNA.

The difference is that the proton beam of radiation only releases its energy when it hits the cancerous tissue; it then stops, meaning less damage to surrounding tissue.

This is why it’s thought to be more suitable for cancers in particularly vulnerable areas, such as the brain.

– The tiny particles — called protons — that destroy the cancer cells are ‘accelerated’ in huge machines to a speed of 100,000 miles per second to create the high-energy beam.

– It’s hoped that the two NHS proton beam centres due to be operational by 2020 — one in London, one in Manchester — will treat 1,500 patients a year. Currently, the NHS sends about 100 people abroad for the treatment.

– One in 100 people with cancer would be suitable for proton beam therapy, according to Cancer Research UK, although some experts have suggested it could be as many as one in ten of those who receive conventional radiotherapy currently.

– It is only suitable for solid tumours rather than blood cancers such as leukaemia — and, according to the NHS, is considered most suitable for tumours in the brain or spine, or complex childhood cancers, where the risk of serious side-effects is greatest.

– A treatment session generally takes 15 to 45 minutes, similar to radiotherapy.

– The machine that generates the protons is huge. Called a cyclotron (the one pictured here is at the Prague cancer centre where Ashya King was treated), it weighs 90 tonnes.

– Installing it requires digging a hole approximately 30 metres deep to house the equipment and the construction of concrete walls to encase it. The one in Manchester sits in a bunker reinforced with timber, steel and concrete.

– The treatment itself is usually painless.