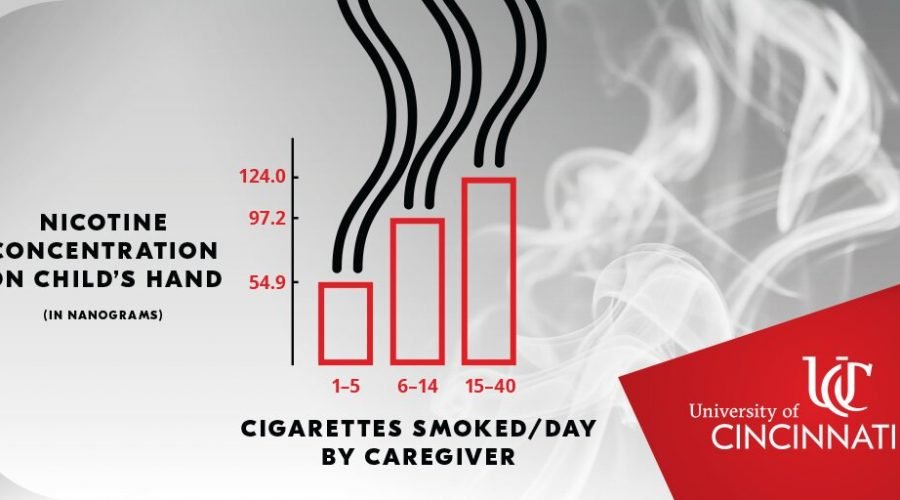 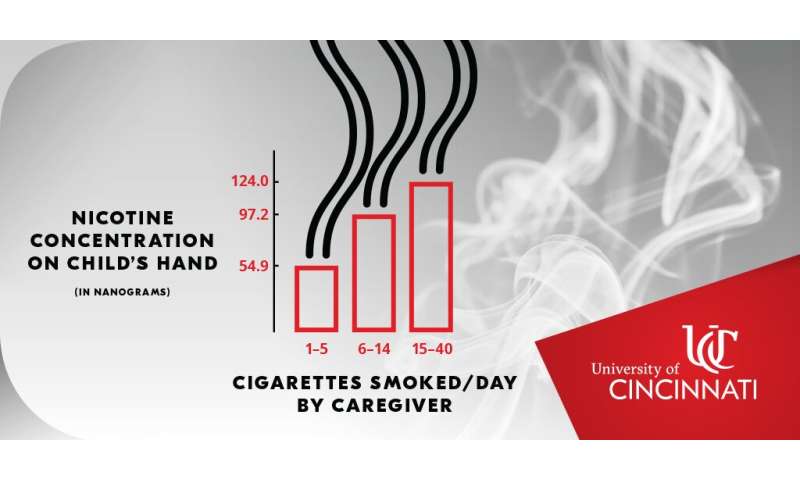 The harmful effects of exposure to tobacco smoke have been known for many years. Cigarette and cigar smokers are at significantly higher risk of contracting all sorts of respiratory maladies, and research linking secondhand smoke to cancer goes back nearly three decades.

But what about the chemicals that stain the walls, ceilings, carpet and upholstery in rooms in which tobacco has been smoked? What about the lingering nicotine on the fingers of smokers? Is there something dangerous in the residue that lingers long after the smoke clears?

Researchers at Cincinnati Children’s Hospital Medical Center and the University of Cincinnati have found more evidence of the potentially harmful effects of exposure to the residue and particles left behind by tobacco smoke. In “Nicotine on Children’s Hands: Limited Protection of Smoking Bans and Initial Clinical Findings,” published Jan. 16 in Tobacco Use Insights, Cincinnati Children’s attending physician Melinda Mahabee-Gittens and UC assistant professor Ashley Merianos found that not smoking around children doesn’t stop the children of smokers from being exposed to nicotine. They also found that that higher levels of exposure to tobacco smoke residue—which likely includes carcinogenic tobacco-specific nitrosamines—may be linked to respiratory problems.

“It also shows that exposure to tobacco smoke toxicants is more widespread than previously thought because exposure in children is not limited to inhaling secondhand smoke,” adds Mahabee-Gittens.

Research staff collected wipes of the dominant hands of 104 children visiting the Cincinnati Children’s Pediatric Emergency Department between April 2016 and August 2017 with complaints potentially linked to tobacco smoke exposure and who had at least one caregiver who smoked. The handwipes were then analyzed for nicotine.

The study found significant levels of nicotine on the hands of children of smokers whose caregivers did not smoke in their presence, averaging 82 nanograms (ng) of nicotine. A similar amount was found on the hands of children whose caregivers smoked between one and five cigarettes per day in their presence. Children whose parents smoked 15 or more cigarettes around them had nicotine levels on their hands in excess of 200 ng.

More than half of the children in the study were under 2 years old. Children in that age group averaged about 69 ng nicotine, while children between the ages of 2 and 4—who accounted for 25 percent of the children studied—averaged nearly three times as much (185.6 ng). Children ages 5 and over were found to have only slightly more nicotine on their hands than the children under 2.

“Future work should explore the associations of hand nicotine and age to determine how children’s changing interactions with their environment and behaviors contribute to increased nicotine in 2- to 4-year-olds, whether handwashing decreases the risk and whether increased levels are associated with increased [secondhand smoke-related] clinical illnesses,” according to the research article.

Children with higher levels of nicotine found on their hands were significantly more likely to have respiratory symptoms such as wheezing and coughing, Merianos says.

“That’s just a preliminary finding,” she cautions. “We need to do more work. There’s a paucity of literature available on the impact that thirdhand smoke has on health effects in children.”

Merianos advocates for caregivers to quit smoking to decrease the exposure of children to nicotine and smoking-related chemicals. For those who do not quit, she recommends handwashing, showering and changing clothes after smoking to minimize thirdhand smoke exposure.

Mahabee-Gittens adds that parental smokers should know that these measures alone are not enough to protect their children since deep-seated reservoirs of toxicants continue to build when smoking continues.