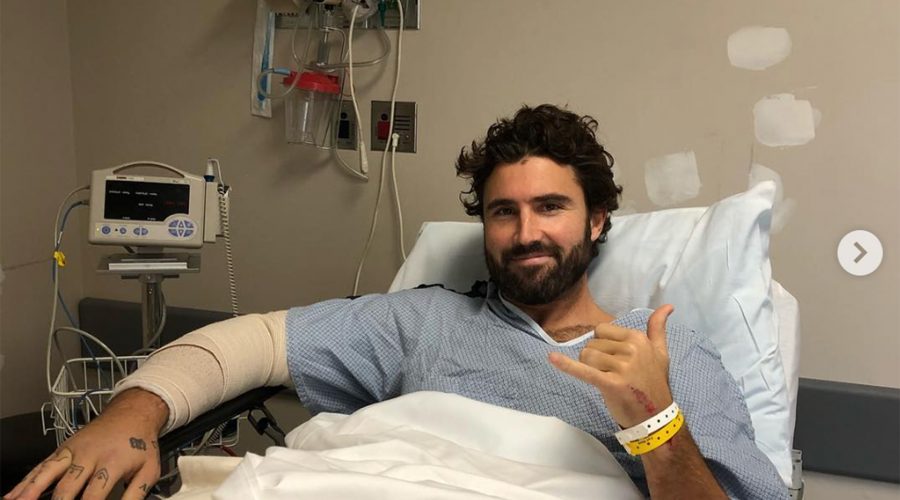 Brody Jenner is on the mend after suffering a recent elbow injury.

On Feb. 5, the Hills alum, who is confirmed to star in reboot The Hills: New Beginnings, shared a photo and video to Instagram of himself in a hospital bed and announced that he had to have his elbow put “back together.”

“Just want to say thank you to Dr Modabber and his incredible team for putting my elbow back together,” wrote Jenner, 35.

“Apparently Shoey and I were snowboarding in Park city while I was under ??,” he continued, joking about his dog Shoey and what he said as his anesthesia wore off following the procedure. “Thanks for all the get well wishes! ??.”

During his hospitalization, Jenner’s mother Linda Thompson sat beside her son and filmed him after the nurse administered fentanyl, which can treat severe pain.

Days later, he said that he felt “lucky to live in 2019” and announced to his followers that he had begun rehabilitation on his arm.

“Feeling pretty lucky to live in 2019. If this was a few hundred years ago they might of just chopped the lower half of my arm off, filled it with leeches and sent me home,” he captioned an X-ray photo of his elbow.

The accident came after Jenner fell off of a one-wheel hoverboard.

In an Instagram Story previously shared on his profile, Jenner’s wife Kaitlynn Carter was on the motorized board on grass before he rode it down to a beach, fell off and showed his injured arm to the camera.

This past October, Jenner celebrated the anniversary of the day he first met Carter, 30, with a touching Instagram post.

Calling her his “best friend,” Jenner shared photos of the two throughout their relationship, including their June 2018 wedding in Indonesia.

“5 years ago today I met my best friend and the love of my life! I can’t believe it has been 5 years,” he wrote. “Time flies when you have the most amazing woman on earth by your side.”

Carter also paid tribute to her husband on Instagram, reflecting on how their relationship gets “better and better” everyday.

“Happy 5 years to the most genuine, loving, fun, goofy, affectionate, kind and beautiful person I’ve ever had the fortune to have in my life. You’re more than my husband and more than my best friend. You’re EVERYTHING to me,” she wrote alongside a series of photos, even including one of Jenner relaxing in a bathtub while wearing a cowboy hat.

“I am so fortunate to be sitting here next to you 1,825 days from the day we met feeling like every day gets better and better and I love you even more and more. Let’s just keep doing what we’re doing cause it’s working!!! I LOVE YOU SO MUCH!!!” she wrote.