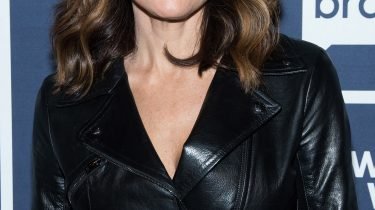 The Real Housewives of New York City star revealed that she was flying on Thursday when she boarded the aircraft and realized the crew was serving fish despite her calling ahead to check she would be safe.

After bringing it to their attention, Frankel, 48, said the pilot “delightfully announced” to all of the passengers that they had to turn around — something the star said she tried to stop so not to inconvenience other passengers.

“Called airline mult [iple] x [times] to say I have fish allergy. Got on & they’re serving bass,” she tweeted. “They couldn’t not serve it they said. Then they were turning around which I protested bc it would delay people. Cabin asked to not serve it & pilot made announcement to plane. That was fun. #epilife”

Frankel then retweeted a recent story about a young boy from New York whose family claim he died after fish was cooked near him. How exactly the boy died currently remains under investigation.

Immediately after her tweets, fans began to offer their opinions on the situation, with some suggesting Frankel fly on private planes to avoid potentially fatal encounters with fish.

In response, Frankel explained, “I am fortunate enough to do that sometimes, but it is a massive waste and not environmentally friendly if doing so. But I hears ya.”

When someone asked if she had the ability to invest in a personal plane, Frankel added, “I ain’t got it like that. And I want to work less not more.”

After some fans debated the severity of serving fish on an enclosed aircraft — “I didn’t know that could be an airborne allergy!” wrote someone — Frankel offered her own perspective and knowledge on the situation.

“To clarify: some allergens are transmitted by touch & air. Fish is one & is fatal. The more exposure to them, the more susceptible,” she wrote. “It’s not like an immunity thing where more exposure means less susceptible. It’s opposite. I’ve always kept it quiet but that’s over now.”

She also explained to her followers that “Being trapped in a cabin w no windows w cooking fish is a death trap,” and argued that “The airlines and world needs to change. I was always self conscious about it & today didn’t help.”

It is currently unclear which airline Frankel was flying at the time of the incident, but the reality star said they “know who they are.”

Reps for the reality star did not immediately respond to PEOPLE’s request for comment.

RELATED: Bethenny Frankel Suffers a Near-Fatal Allergic Reaction to Fish: ‘I Thought I Had a Stroke’

Frankel has been vocal about fish allergy awareness for quite some time. Recently, she was hospitalized after suffering from a nearly fatal allergic reaction.

Frankel also thanked Newton Wellesley Hospital in Massachusetts by tagging them on Twitter and writing, “xo.”

“She was in ICU for two days and just got out tonight,” a friend of Frankel later told PEOPLE. “She almost died. It was that serious. Her blood pressure was through the roof and she was unconscious. She went into anaphylactic shock. Her boyfriend saved her life.”

RELATED VIDEO: Bethenny Frankel Reveals How She ‘Blew Up Like a Tick’ During Pregnancy

“Is there fish in that soup?” Frankel fearfully asked her co-stars during the episode while they were all seated for dinner. “I’m itching. My throat is itching. I thought it was chicken, f—.”

She quickly fled the room with water in her hand only to come back later to admit she vomited.

“It’s the worst feeling, your throat gets itchy, you feel like you’re going to throw up,” Frankel explained in a confessional. “It’s like poison inside you.”

Related posts:
05/01/2019 Health News Comments Off on Bethenny Frankel's Plane Forced to Turn Around After Serving Fish Because She is Deathly Allergic
Categories
Recent Posts