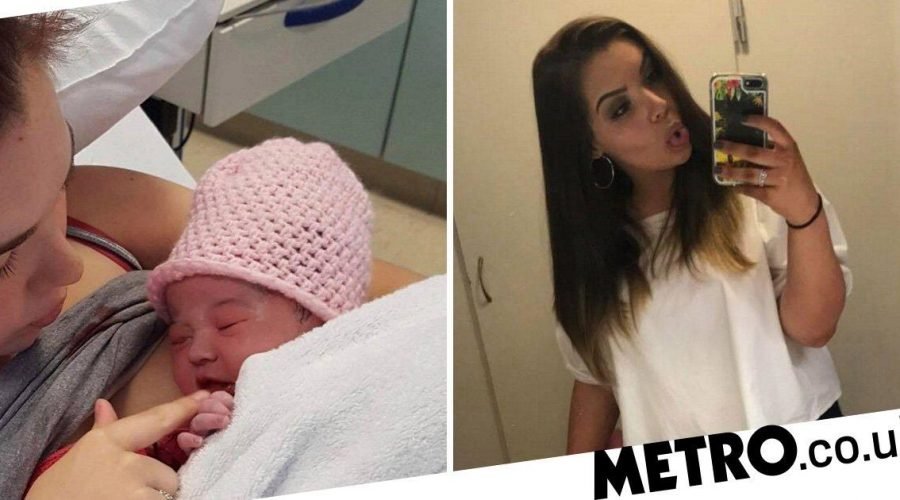 By the time she found someone, Emmalouise had already given birth to her baby girl, Ciara, in the backseat of the car/

‘The bump popped out literally out of the blue that one morning,’ said Emmalouise. ‘I had woken up and you could tell it was a bump. It was dead high up.

‘My Nanna kept saying “it’s definitely a baby but I don’t think you’re ready to give birth just now because of how high up you are”.

‘By the time I got in the car the contractions were coming every two minutes and then my water broke.

‘As soon as she was born, my nanna was in so much shock, but luckily enough she had a big cover in the back and we managed to wrap her up in that.

‘She kept stopping people in the street saying, “that’s my great-granddaughter, look how gorgeous she is”. I was just panicking in case Ciara wasn’t alright, but she was perfect.

‘With Ciara I was really lucky that nothing was wrong. It was a crazy morning.

‘The midwife came out thinking I was about to give birth and it was an unknown pregnancy. She asked how long I thought I had and was I timing it.

‘But then opened the car door and she was already there. I had already given birth to her.

‘I will definitely tell Ciara when she’s older. On her birth certificate it says she was born outside hospital premises. I never had any doctor’s notes or anything like that.

‘They had to get her bloods taken straight away because they never knew if there was anything [that could be wrong with her].

‘She had to have a hearing test and she wasn’t responding in one ear so we were worried she might be deaf in one ear, but she was completely fine. That was the only thing wrong.’

Naturally, Emmalouise was in quite a bit of shock. Giving birth to a baby you had no idea you were having isn’t your average start to a day.

‘My nanna was in that much shock that she didn’t want to believe it. We were really lucky she was okay.

‘I hadn’t taken a pregnancy test, I had no symptoms, nothing. Nothing at all.

‘The doctors couldn’t explain why I didn’t have a bump. They just told me that she must have been sitting in my lower back and that it is quite common.

‘People tend to find out around their 20-week scan once the baby starts to kick, but Ciara never kicked. I never felt her do it.

‘I never had any morning sickness or cravings either, nothing like that.

‘At the start [of using the pill] I was bleeding a little bit, but then my periods just stopped altogether so I just thought that it was the pill.

‘I had no bump. I had put on a bit of weight, so my mum was suggesting we go out walking and do different things to burn it off because I kept going on about my weight.

‘The weight was across my full body, more in my arms, legs and face than anywhere else. My stomach never grew.’

Emmalouise and her partner, Sean, describe Ciara as a happy accident, calling her ‘the best thing that could have happened’, but they’d rather not have any more surprise children.

Emmalouise has now swapped the contraceptive pill for the coil, and takes regular pregnancy tests just in case.

In October, Emmalouise’s grandma passed away. She’s honoured the woman who played such a role in her daughter’s birth by giving Ciara the middle name Louise.

‘My nanna had a special bond with her,’ said Emmalouise.

‘I keep saying that that happened for a reason. I gave birth outside so I could be with my nanna.

‘My nanna’s name was Louise, so that’s where Ciara gets Louise from.’

MORE: Woman who had flat stomach and regular periods gives birth to a surprise baby

MORE: Contraceptive earrings could soon be the way to protect against pregnancy

MORE: Can you drink too much water?