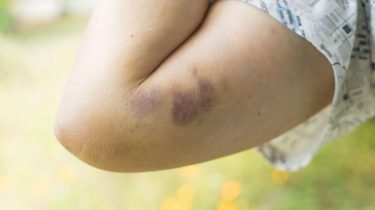 Bruises are a type of bleeding under the skin. A sharp blow, such as from falling or colliding with a large object, can break tiny blood vessels called capillaries. This causes bleeding in the area of the injury.

Because the bleeding is under the skin, the area may swell and look red or blue. The bones and soft tissue can bruise. Some types of contusion include:

Just as a cut bleeds from tiny blood vessels, injuries to tiny blood vessels under the skin cause most subcutaneous contusions. Areas that a person may land on or use to support themselves during a fall, such as the hands and knees, are particularly vulnerable.

Very rarely, a large bruise causes massive bleeding, from a vein or artery, that is difficult to stop. This can be life-threatening without treatment. These contusions are large and extremely painful, and they are usually due to major trauma, such as a serious car accident.

A small bruise on a person’s knee or elbow will not cause them to bleed to death without some other condition, such as a bleeding disorder, being present.

The muscles are full of blood vessels that supply them with blood and oxygen. A bruise to a muscle is deeper than a subcutaneous contusion, and it can be very painful. A person with a muscle contusion may think that they have a sprain, strain, or broken bone.

Muscle contusions often heal without treatment. Sometimes, however, a large volume of blood will collect in the muscle. This can cause a painful swelling called a hematoma. Doctors may drain a hematoma to help the muscle heal more quickly.

For most contusions, the main symptom is pain. The pain can be either mild or severe.

Larger, deeper contusions, such as those affecting the bone or muscles, are typically more painful. If there is pain following a fall or blow, there may be a contusion.

Some common symptoms of a contusion include:

Contusions to organs can affect their ability to function. Following a hard blow to the stomach, back, or chest, a person should seek immediate medical treatment for pain, swelling, weakness, or any signs of illness. These could be signs of an organ contusion.

Difficulty breathing or changes in heart rate could be signs of a lung or heart contusion. These are medical emergencies that require immediate treatment.

Most contusions of bones, muscles, skin, and cartilage will not need medical treatment. Instead, using the RICE method at home can help with pain and swelling, as well as speed up recovery:

Organ contusions may require more intensive treatment, including hospitalization. A doctor may need to perform surgery to repair an injury or stop the bleeding. Continuous monitoring of vital signs may also be helpful, especially following a kidney or lung contusion.

A person should see their doctor following a serious traumatic incident such as a car accident, a fight, or a fall from an extreme height. This is especially important to do if the pain is intense or the injury does not go away on its own within a few days.

A contusion is an injury that causes bleeding and tissue damage underneath the skin, usually without breaking the skin. Any injury that puts pressure on an area repetitively can cause a contusion.

Falls, blows sustained during fights or from falling objects, and car accidents may also cause bruises.

Contusions can be very painful, even when they are not serious. Pain is a message from the body that urges rest and care. With rest, most contusions will heal within a few days. Very large contusions, however, may take several weeks to heal.

Related posts:
24/01/2019 Health News Comments Off on What is a contusion (bruise)? Bones, muscles, and more
Categories
Recent Posts