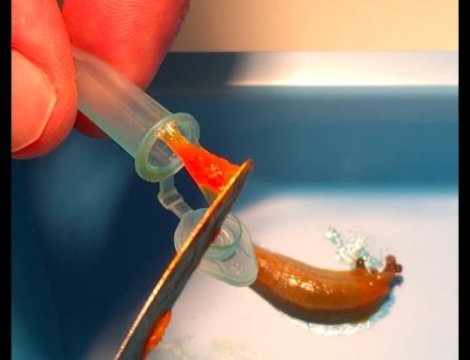 The Dusky Arion slug produces a defensive glue that fouls the mouthparts of any would-be predator. Two new studies reveal more about how this glue achieves its strong sticking power and flexibility, insights that could be used to create better medical adhesives.

“Typical sutures like staples and stitches often lead to scarring and create holes in the skin that could increase the chance of infection after surgery,” said Rebecca Falconer, who conducted one of the studies. “Understanding the roles of adhesive proteins in the slug glue would aid in the creation of a medical adhesive that can move and stretch yet still retain its strength and adhesiveness.”

Falconer and Christopher Gallego-Lazo, undergraduate researchers in the lab of Andrew Smith, PhD, at Ithaca College, will present their research at the American Society for Biochemistry and Molecular Biology annual meeting during the 2019 Experimental Biology meeting to be held April 6-9 in Orlando, Fla.

Falconer analyzed 11 proteins unique to the slug glue that were previously identified by Smith’s research team. Using recombinant DNA technology, she produced abundant amounts of each protein for analysis. The techniques she developed could also be used to reproduce the proteins for a humanmade glue.

Gallego-Lazo’s study focused on understanding the double network structure that makes the slug glue highly deformable but able to withstand large amounts of force. The glue has a stiff protein network that uses sacrificial bonds to absorb energy, protecting an intertwined deformable network of carbohydrates.

Gallego-Lazo discovered that changing specific chemical bonds within the slug glue’s protein network modified the glue’s strength. These bonds can be reformed naturally, enabling the glue to deform while maintaining its strength.

“Few studies on biological adhesives have identified the exact nature of the bonds holding the glue together,” said Gallego-Lazo. “This knowledge can guide the development of an organic synthetic adhesive that would reduce the risk of infection and scarring compared to stitches and staples and could be applied rapidly and simply.”