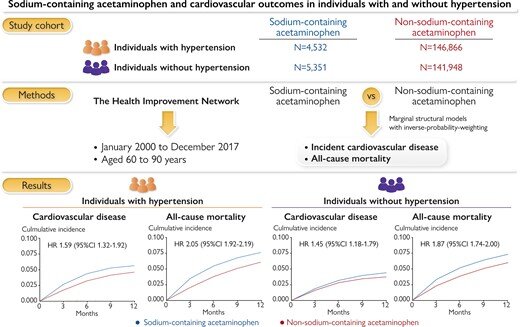 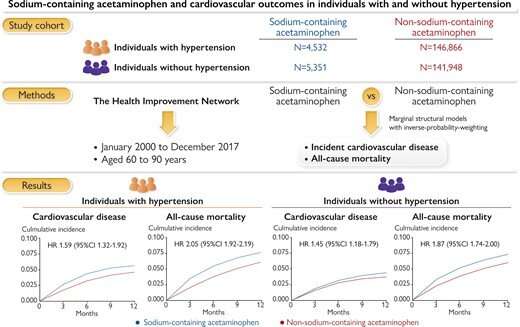 Doctors have warned that people should try to avoid taking dissolving, fizzy paracetamol that contains salt, following findings from a large study that shows a link with a significantly increased risk of heart attacks, stroke, heart failure and death.

The study of nearly 300,000 patients registered with UK general practitioners (GPs) is published today (Thursday) in the European Heart Journal.

Sodium, one of the main components of salt, is often used to help drugs such as paracetamol (also known as acetaminophen) dissolve and disintegrate in water. However, effervescent and soluble formulations of 0.5 g tablets of paracetamol can contain 0.44 and 0.39 g of sodium respectively. If a person took the maximum daily dose of two 0.5 g tablets every six hours, they would consume 3.5 and 3.1 g of sodium respectively—a dose that exceeds the total daily intake of 2 g a day recommended by the World Health Organization. Other formulations exist that contain an extremely small amount of sodium or none at all.

Too much salt in diets is known to be a major public health problem and is associated with an increased risk of cardiovascular disease (CVD) and death among patients with high blood pressure. However, there is inconsistent evidence of a similar risk for people with normal blood pressure and it would be unethical to conduct a randomized controlled trial to look at this.

The researchers found the risk of heart attack, stroke or heart failure after one year for patients with high blood pressure taking sodium-containing paracetamol was 5.6% (122 cases of CVD), while it was 4.6% (3051 CVD cases) among those taking non-sodium-containing paracetamol. The risk of death was also higher; the one-year risk was 7.6% (404 deaths) and 6.1% (5,510 deaths), respectively.

Sodium is used widely in drug preparations for enhancing solubility and disintegration. In 2018, 170 people per 10,000 of the population in the UK were using sodium-containing medications, with a higher proportion among women.

In an editorial to accompany the research paper, Alta Schutte, professor of cardiac, vascular and metabolic medicine at the University of New South Wales and The George Institute for Global Health, Sydney, Australia, and Bruce Neal, executive director of The George Institute, and professor of clinical epidemiology at Imperial College London, UK, write that in the UK alone in 2014 there were 42 million paracetamol-containing medicines prescribed, with a further 200 million packs sold over the counter.

“This equates to ~6,300 tons of paracetamol sold each year in the UK, with the figure for France close to 10,000 tons. Fortunately, only a small proportion of paracetamol formulations contain sodium but, with ‘fast-acting’ and ‘fizzy’ medications increasing in popularity, the adverse effects of medication-related sodium intake look set to rise rather than fall,” they write.

Prof. Zeng said that clinicians and patients should be aware of the risks associated with paracetamol that contains sodium and avoid unnecessary consumption, especially when the medication is taken for a long period of time.

“Although the US Food and Drug Administration requires that all over-the-counter medications should label the sodium content, no warning has been issued about the potentially detrimental effect of sodium-containing paracetamol on the risks of hypertension, cardiovascular disease and death. Our results suggest re-visiting the safety profile of effervescent and soluble paracetamol.”

Profs. Schutte and Neal call for urgent action in their editorial. “The weight of the evidence makes ongoing inaction on sodium-containing medications untenable,” they write. “The widespread use of effervescent medication in the general population, and the enormous doses of sodium that can be consumed inadvertently by unsuspecting consumers requires urgent action. Particularly concerning is the observation in some surveys that up to 94% of users of fizzy medications are self-medication using over-the-counter preparations. There is an immediate need for protection of consumers against these risks. The most plausible and effective strategy is likely to be the mandatory labeling of all medications containing significant quantities of sodium with a front-of-pack warning label… Information programs that raise public and practitioner awareness of the hidden sodium in medications, and education about the need to avoid effervescent, dispersible, and soluble medicines in all but essential circumstances should also be considered.”