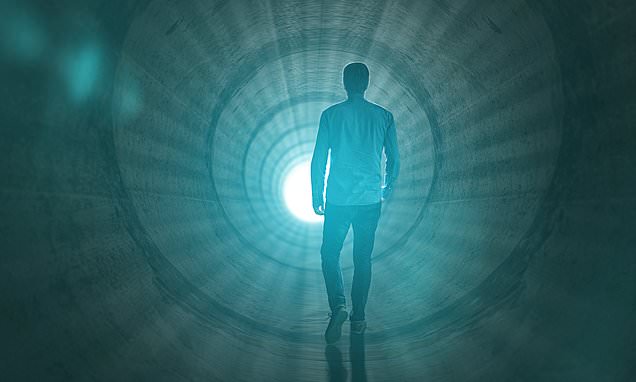 One in 10 people claim to have overcome a ‘near-death’ experience (NDE), research suggests.

In a study of more than a 1,000 people, 106 claimed to have ‘stared death in the face’ during a car crash, heart attack or even while praying.

This caused many to see their lives ‘flash before their eyes’, with some reporting being ‘paralysed’ or having their souls ‘sucked out of them’.

One man, who nearly drowned as a child, ‘saw dead relatives at the gate of a tunnel of darkness’ as ‘huge waves pulled him from the shore’.

And a woman who was subjected to violence claimed she now wakes to ‘find a demon sitting on her chest’.

The University of Copenhagen researchers linked NDEs to ‘intrusions’ during the rapid eye movement (REM) of sleep, which is when dreams generally occur. 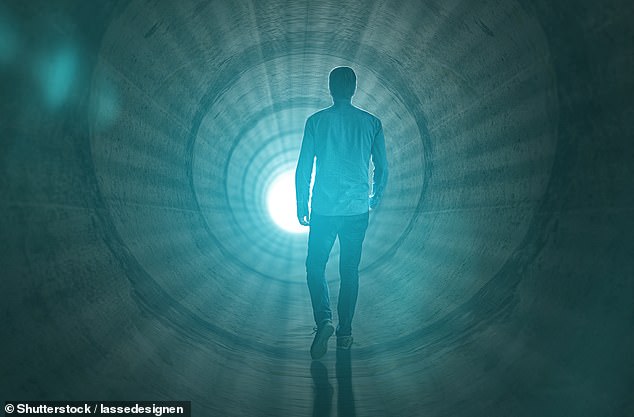 One in 10 people claim to have overcome a ‘near-death’ experience, research suggests (stock)

Both NDEs and REM intrusions may be linked to disturbances in the nerves in our hearts and lungs.

NDEs are ‘conscious perceptual experiences occurring in a person close to death or in situations of imminent physical or emotional threat’, the researchers said.

Many ‘sufferers’ report feeling like their thoughts have ‘sped up’ and they have no sense of where they are.

Despite NDEs seeming to be common occurrences, their ‘pathophysiological basis remains unknown’, the researchers said.

In order to better understand NDEs, the researchers recruited 1,034 jurors and magistrates from 35 countries via an ‘online platform’.

The participants were first asked if they had ever experienced a NDE.

WHAT DID SOME OF THE PARTICIPANTS SAY ABOUT THEIR NEAT-DEATH EXPERIENCES?

One participant, 37, reported feeling out of control after she gave birth. ‘I felt like I just died, and I went to heaven,’ she said.

‘I heard voices and I was sure I would not come back to my life. It was weird. I could not control my body.’

And a 28-year-old victim of violence claimed she often wakes in the middle of the night unable to move.

‘I see strange things, like spirits or demons at my door, and after a while I see them coming beside me,’ she said. ‘I can’t move or talk, and they sit on my chest.’

One even reported seeing ‘dead relatives’ after he nearly drowned on a beach in Florida at 10 years old.

‘Huge waves started pulling me further and further from the shore,’ the 28-year-old said.

‘My life started flashing before me in my head. I felt like my soul was being pulled out of my body.

‘After a few moments I felt like I was in an enormous tunnel of darkness and at its end there was the brightest white light I have ever seen.

‘I remember my dead relatives were at the gate, including my maternal grandmother.

‘But then I felt I was sucked out of the tunnel and I fell, crashing into my body again.’

Despite his dramatic tale, another participant reported feeling ‘total peace’ when she nearly drowned at eight years old.

‘I felt total peace,’ she said. ‘Twenty years later I can still remember how I felt. It was an amazing feeling.’

The 289 who answered ‘yes’ then completed a questionnaire that asked questions like ‘did you see deceased spirits?’, ‘did you have a feeling of peace?’ and ‘did you seem to enter some unearthly world?’.

These answers were tallied, with 106 participants scoring seven or more. This was defined as being a ‘true’ NDE.

Far from NDEs being the peaceful experience past studies have reported, almost three quarters of participants found the ordeal to be unpleasant.

However, this fell to just 14 per cent among those whose NDEs scored above seven on the questionnaire.

The researchers led by the neurologist Dr Daniel Kondziella then looked at past studies that suggested ‘REM sleep intrusion’ is linked to NDE.

REM is defined by the random eye movements and muscle weakness that occurs when dreaming typically takes place. This can ‘intrude’ into wakefulness, leading to hallucinations and paralysis.

To determine whether the participants suffer from REM intrusion, they were asked if they ever see objects or hear sounds that others cannot just before nodding off.

They were also asked if they have ever woken to find themselves ‘paralysed’ or weak. Results revealed 10 per cent of the participants had endured a NDE.

This is higher than previous studies, which recorded the ordeals’ prevalence as being as low as four per cent.

The findings were presented at the 5th European Academy of Neurology Congress in Oslo.

‘Our central finding is we confirmed the association of NDEs with REM sleep intrusion,’ Dr Kondziella said.

‘Although association is not causality, identifying the physiological mechanisms behind REM sleep intrusion into wakefulness might advance our understanding of near-death experiences.’

The researchers claim REM disturbances are the ‘hallmark of narcolepsy’, a long-term brain condition that causes a person to suddenly fall asleep at inappropriate times.

The neurological condition is thought to be caused by disturbances to the nerve fibres in the heart and lungs, which may also trigger NDEs.

The researchers hope their study will help medics understand what causes people to perceive NDEs.

However, they stress the ordeals are ‘clinically complex’ and hard to uncover with self-reported questionnaires.