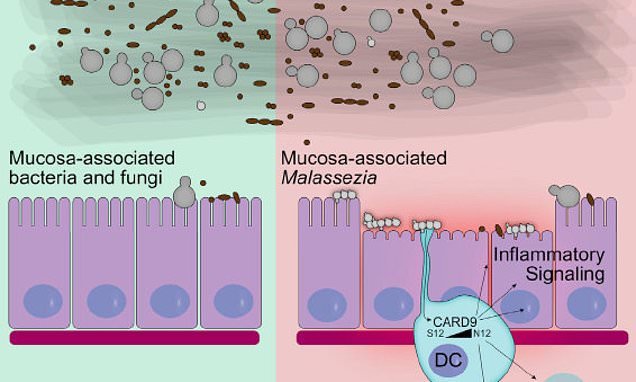 Dandruff could be key to Crohn’s disease: Scientists discover the hair fungus also resides in the GUT and causes inflammatory reactions in people with digestive diseases

A fungus linked to dandruff may be a crucial factor driving the chronic stomach condition Crohn’s disease, according to a new study.

Malassezia yeasts found in oily skin and scalp follicles are linked to skin conditions, including dandruff.

Researchers discovered that the fungus commonly found in human hair follicles also resides in the gut.

In most of us, it is harmless, but in some people with a certain genetic make-up it appears to worsen their intestinal disorders such as inflammatory bowel disease (IBD).

The research team hope that by eliminating this fungus in people with Crohn’s, they could relieve some or all of their debilitating symptoms. 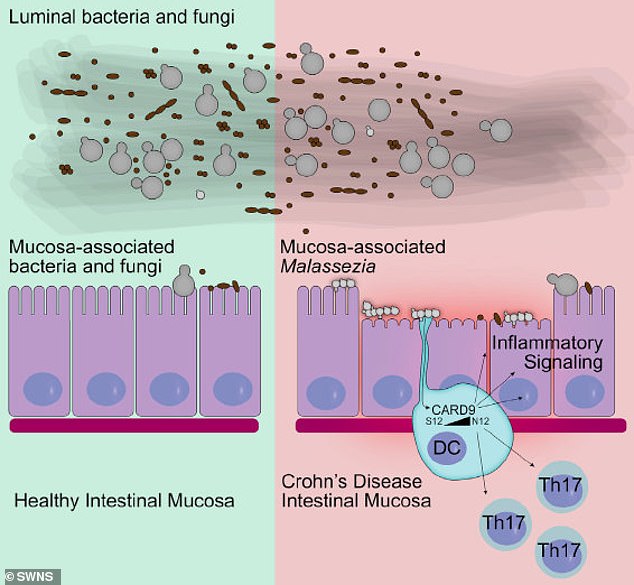 Researchers discovered dandruff-linked fungus resides in many people’s guts, but doesn’t cause a reaction in most (left). Some people, however, suffer inflammation from it (right)

Study co-author Dr David Underhill, of Cedars-Sinai Hospital in Los Angeles, said: ‘We were surprised to find that Malassezia restrica was more common on intestinal tissue surfaces in Crohn’s disease patients than in healthy people.

‘Further, the presence of Malassezia was linked to a common variation in a gene known to be important for immunity to fungi – a genetic signature more common in patients with Crohn’s disease than the healthy population.’

IBD is characterized by changes in immune responses to the intestinal microbiome.

While most studies on the microbiome focus on bacteria, Dr Underhill’s team investigates fungi’s presence and its potential role in intestinal disease.

Study co-author Dr Jose Limon, a Cedars-Sinai research team member, said changes in intestinal fungi such as M. restricta – and responses to the fungi – may be a factor in exacerbating symptoms that contribute to disease in some Crohn’s disease patients.

The researchers had originally found that fungi are present in the gut microbiome of mice and that immunity against the fungi helps control gut-based inflammation.

In mice, the presence of M. restricta worsened colitis, a type of intestinal inflammatory disease.

Looking at the intestinal fungi of healthy people and patients with Crohn’s disease, a form of IBD, the researchers found several mucosa-associated fungi that were ‘significantly more abundant’ in Crohn’s patients.

The findings, published in the journal Cell Host and Microbe, showed that M. restricta in particular was elevated in Crohn’s patients carrying a genetic variation known as the IBD CARD9 risk allele.

The researchers said that the genetic variant enhances the ability of human immune cells to pump out inflammatory cytokines in response to M. restricta.

Dr Underhill added: ‘The data so far do not suggest that the presence of Malassezia in the gut is an inherently bad thing.

‘We found it in some healthy people, and in mice it does not seem to cause disease in the gut by itself.

‘However, if there is some intestinal inflammation, Malassezia seems to make it worse.’

He said the next steps involve exploring whether eradicating the yeast from the intestinal microbiome clears the patients’ symptoms.