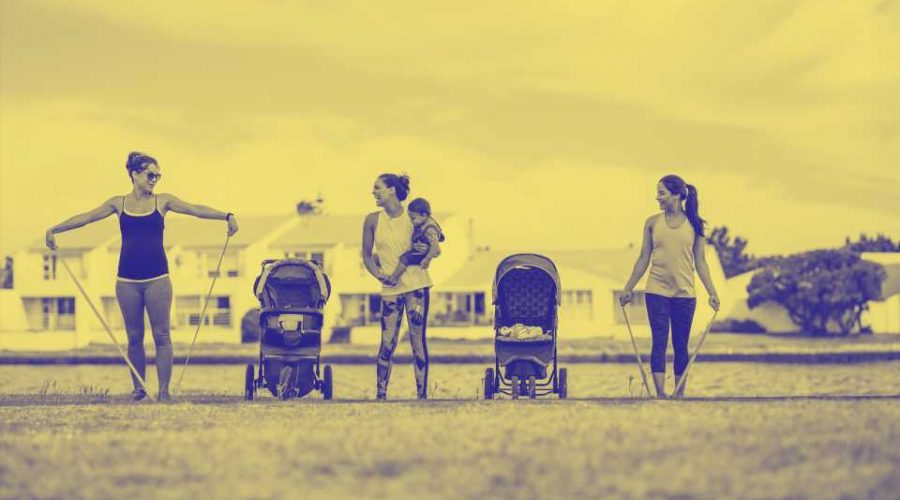 Fitting in a workout is challenging for most people, but may be especially hard for new moms. Between juggling the feedings, weird sleeping schedule and a new body, exercise may be on the back burner. Sure, you could always do a few squats while holding your kid, but where’s the social component and accountability with that? That’s where mom fitness groups come in — organized exercise that helps get new mothers out of the house and into shape.

But are these groups — like FIT4MOM and 99Walks — the ideal solution to the isolation of new motherhood and a great way to get some steps in, or expensive cliques? SheKnows spoke with moms with a variety of experiences in these groups to find out whether they’re worth the time, effort and money.

The best thing since disposable diapers

When personal trainer Shana Abraham was pregnant with her first child, she joined a weekly prenatal fitness group. She says that she also made some lasting friendships that helped her get through the tough early days of being a new mother.

And as a fitness professional, Abraham sees the benefits of these groups once the baby arrives. “Meeting up with other mothers not only gets you out of the house, it keeps you physically active,” she tells SheKnows. “You also are able to interact with other women that are going through similar experiences as you. The bond that you can form in these groups is very beneficial in the beginning both physically and mentally.”

Similarly, Catherine Chan, an entrepreneur in the fitness tech industry and a mother, actively searched out mom-and-tot workout classes to try to find other moms and had a positive experience. “What I loved most when my daughter was young was to be able to connect with a group of other ladies who understood what I was going through, and that community is a very powerful support,” she tells SheKnows.

And it was more than just a workout: Chan says that the moms would also use that time to run parenting tips by each other, offer and receive advice and vent about the struggles of parenting. In addition, some of the members of the group also arranged to pass along second-hand baby clothes and other items to others who needed them.

Kristina Sevel, a member of FIT4MOM Willoughby, Ohio says she also benefited from getting to spend time with other new moms. “It gave me somewhere to be every day, and a community of women who were going through the same things I faced on a daily basis,” she tells SheKnows. “Rather than feel isolated on the couch day after day, I had something positive to look forward to, and I was able to bring my little one with me.”

This sense of community is especially helpful for moms in urban area, Chan says. “Millions of people live in huge cities but don’t always have family or even friends living close by,” she explains. “The days of ‘it takes a village’ seem to be long gone, and the perception is that more people than ever are suffering from isolation and loneliness, especially moms who are staying at home with newborns.”

As far as the fitness benefits, Chan says that these groups — especially the ones where you can bring your baby along — are developed specifically to work around having a baby attached to your chest. Along the same lines, she notes that many of the instructors have both prenatal and postnatal certifications and receive special training for working with concerns of pregnant people and new moms.

Not everyone’s cup of juice

But these groups aren’t for everyone. Christina Furnival, a licensed therapist and stay-at-home-mom of two young children (ages one and three), attended a free introductory session to a Stroller Stride group in her neighborhood when her first child was a few months old. Though she was initially excited about it, she says that she left feeling deflated. Part of this was because the group consisted of women with toddler-aged children — meaning they had all been in the group for a while.

“I am quite a social person, but could sense a clique mentality in the group,” Furnival tells SheKnows. “Not one mom in the group was overtly friendly or introduced themselves. The coach was nice, but also did not facilitate inclusion. I was disappointed because I had hoped this would be a good outlet for me as I was dealing with postpartum depression and anxiety. I recognize this would not be every mom’s experience at a commercialized mom fitness group, but I am sad to say it was mine.”

Similarly, Vanessa Gordon, the publisher of East End Taste Magazine, was a Stroller Strides customer for three months, and discovered that these groups were not the best fit for her. Along with experiencing few bonding opportunities with the other mothers in the group — and finding them full of small cliques instead — she also didn’t think that the exercises were challenging enough. Since getting a workout was her main reason for being there, this wasn’t ideal.

“The exercises were so easy for me, I really wanted to be challenged and had no time for gossip and silly business,” Gordon tells SheKnows. “It was just unfortunate for me because I spent the first eight weeks of my daughters life cooped up in the house with her and I also wanted her to get out of the house as well and meet other ‘baby friends.’ I didn’t find the other moms friendly and it seemed like everyone knew each other already. I have since met other moms who had those same experiences.”

Instead, Gordon found that exercising solo while setting her own goals was the best option for her, both physically and mentally. One way she did this was by bringing her daughter to the playgrounds and parks where she did solo high-intensity interval training exercises and speed drills.

“Then, I had my own time to myself and went to the gym in the evenings when my husband came home,” she explains. “I realized in order for me to heal and get back into shape, I needed time dedicated for myself.”

Ultimately, like any exercise regimen, you need to find what works for you and stick with it. Fitness is a very personal thing, and it may take some trial-and-error before figuring out your ideal workout. For some new moms, this might mean joining a group, while for others, it means opting for solo training. Either way, what’s important is that you move.