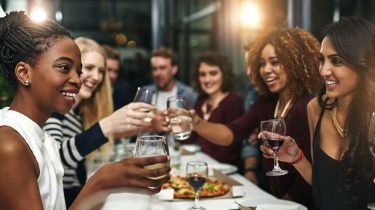 The effects of alcohol consumption on health are the subject of much controversy. Some studies have suggested that moderate drinking may reduce the risk of stroke, depression, and benefit one’s overall cardiovascular health.

Other studies, however, have warned that the risks of alcohol consumption outweigh the benefits. A recent comprehensive review of existing research, for instance, concluded that there is no such thing as a safe level of drinking.

A new study now helps to paint a more nuanced picture of alcohol’s effects on health. An international team of researchers led by Simona Costanzo, from the Department of Epidemiology and Prevention at the Institute for Research, Hospitalization, and Health Care (IRCCS) Neuromed in Pozzilli, Italy, set out to examine the link between alcohol consumption and the risk of being hospitalized.

Costanzo and colleagues examined the drinking habits and medical records of almost 21,000 study participants for at least 6 years. The researchers published their findings in the journal Addiction.

Specifically, the researchers looked at the link between all-cause hospitalizations and cause-specific hospitalizations among 20,682 people. These people had enrolled in the so-called Moli‐sani study and did not have cardiovascular disease or cancer at the beginning of the study.

The researchers divided the participants into “lifetime abstainers, former drinkers, occasional drinkers, and current drinkers,” and clinically followed them between 2005 and 2010.

The Moli–sani study comprises almost 24,500 residents of the Molise region in Italy and aims to uncover the environmental and genetic causes of cardiovascular disease, cancer, and other chronic conditions.

The study’s first author reports on the findings, saying, “We observed […] that a heavy consumption of alcohol is associated with a higher probability of hospitalization, especially for cancer and alcohol-related diseases. This confirms the harmful effect of excessive alcohol drinking on the health,” the researcher says.

“On the other hand, those who drink in moderation present a lower risk of hospitalization for all causes and for cardiovascular diseases compared to lifetime abstainers and former drinkers.”

The National Institutes of Health (NIH) define moderate drinking as “up to 1 drink per day for women and up to 2 drinks per day for men.”

Study co-author Licia Iacoviello, who is the head of the Laboratory of Molecular and Nutritional Epidemiology of IRCCS Neuromed, also comments. “The data on hospitalizations is very important in relation to the impact of alcohol on public health,” she says.

“Hospital admissions, in fact, represent not only a serious problem for people, but they have also a strong impact on national health systems,” continues the author.

“Our study confirms how much excess alcohol can weigh on healthcare facilities, underlining the urgent need of managing the problem, but it also confirms and extends our previous observations according to which moderate alcohol consumption is associated with a reduction in mortality risk, regardless of the type of disease.”

The researchers warn, however, that they do not encourage people to start drinking. Study co-author Ken Mukamal, an associate professor of medicine at the Harvard Medical School in Boston, MA, cautions, “We are absolutely not saying […] that any teetotaler should start drinking to improve his/her health.”

“However, this research reaffirms that the effects of alcohol consumption cannot be reduced to a single catchphrase or punchline. This very comprehensive study clearly shows that we need to consider its health effects based upon both dose and disease.”