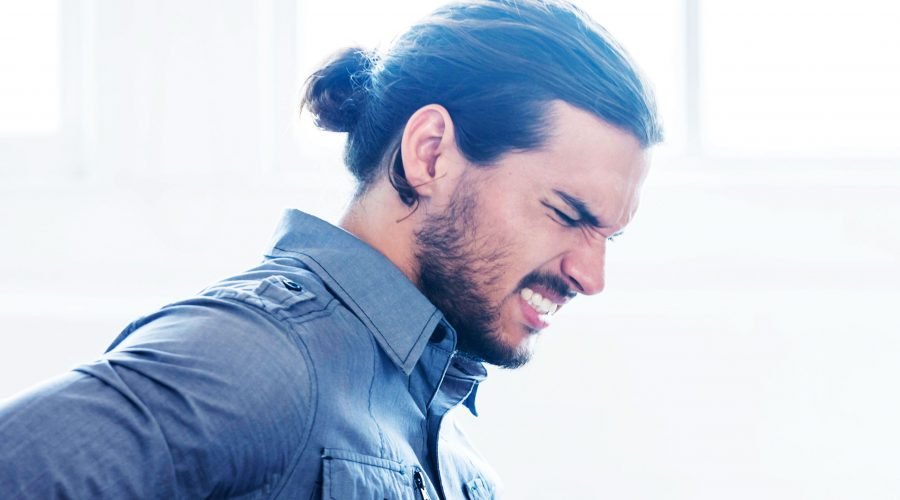 Man cramps are a real thing, but nobody ever talks about them. I mean, what are you going to say? While you’re sitting around the conference table at work, to your co-worker: “Man, it feels like I’m sitting on a golf ball deep inside my ass.” When your buddy is pouring you a beer, as you point below your belt and grimace: “Dude, I have this charley horse right here that won’t go away.” So, no, guys aren’t fessing up on the predicament around their packages. But studies have found that at least one in ten men are dealing with persistent pain in the pelvis, making chronic pelvic pain syndrome the most common urologic diagnosis in men under 50.

Pelvic pain can seemingly strike out of the blue, and its target is often high-achieving, Type A, athletic guys. So, you’re totally fine until one day you’re totally not. The ongoing symptoms can baffle a lot of docs, even urologists who should know about this kind of stuff, so you could end up suffering for longer than you have to. One study found symptoms are present, on average, 87 months before correct diagnosis. Let me do the math for you. That’s seven years.

Once you get guys talking, a common theme emerges. The pain is no joke. “It’s awful,” says a 45-year-old financial analyst who has seen multiple doctors, changed his diet, filled prescriptions, taken supplements and done physical therapy to try to resolve his pelvic pain, which was first misdiagnosed as an infection of his prostate. “You know that feeling the day after you’ve done hundreds of sit-ups after you haven’t done sit-ups in months? You can’t live your life in that kind of pain 24/7.” Pain can be intermittent or constant and it can haunt the penis, scrotum or testicles, the lower abdomen, or around the groin or anal area. It can even emanate into the tailbone and low back, which really throws off docs during the diagnosis game.

Exactly where it hurts and how it hurts can change day to day, and just when you feel like the pain might go away for good, it can come back. Some guys describe cramping, spasming or tightness. Others have dull pain or sharp pain. There can be really weird symptoms, too, in your bowels or bladder. “A half hour after I peed, I would go back to the bathroom because I felt like I had to pee again, but nothing would come out,” says Jack. “At some point, I just gave up and lived with the feeling that I had to pee all day and all night.” Some guys feel constipated. Others feel temporarily better after farting or ejaculating. Others feel worse.

The pain messes with sitting, standing, sleep, sex, work, exercise, socializing, going to the bathroom, to name a few. Guys debate their every move—like going for a run or lifting their luggage into the overhead bin—because they live in fear that they’re going to do something that makes it worse. Researchers compare the quality of life men living with chronic pelvic pain experience right up there with heavy duty conditions like angina, Crohn’s disease and diabetes. “When people are dealing with this it impacts every facet of their life,” says Jessica Reale, PT, DPT, WCS, an Atlanta-based pelvic floor physical therapist who has been treating male pelvic pain for eight years.“I could tell my patients to do anything and they would do it because they want to get better.”

When Reale educates other health care providers about treating pelvic pain, her presentation contains a long list of contributing factors. To name a few, infection of the prostate or bladder, sexually transmitted infections, trauma from a surgery or a biopsy, low back or hip injury, irritation from things like bicycle riding and prolonged sitting. Why can some guys’ private parts roll with the punches while others fall victim to a hidden Hell? Docs don’t exactly know.

One big-time culprit, for a lot of guys, is chronic stress. Some people carry their anxiety and tension in their jaw, neck, or shoulders. Others carry it in their nether parts. Reale calls the pelvic floor a threat-o-meter. If you unknowingly clench your pelvic muscles every time you feel stressed, you could be setting yourself up for male misery. Think along the lines of tension headaches and TMJ where you clench your jaw and then have aching muscles in your face. When the muscles are repeatedly overactivated, it sets off a vicious cycle, write David Wise, Ph.D., and Rodney Anderson, M.D., in A Headache in the Pelvis, the bible for men living with pelvic pain. When you’re confronted with sore, irritated pelvic tissue, you get anxious about how much it hurts and reflexively guard the area from further pain by tensing up those muscles further. This only leads to more pain, which then worries you that something is really wrong…and the cycle continues.

But it doesn’t have to. Here’s what you need to know.

What to do about pelvic pain

Start with a medical screening

Your doctor can check for a root cause like an infection, an enlarged prostate or a harmless or cancerous tumor. If something doesn’t feel right about the diagnosis or you’re not getting better, get a second opinion. Look for someone who is knowledgeable in treating pelvic pain through the International Pelvic Pain Society provider search. Just talking to a specialist who is well-versed in pelvic pain can be powerful stuff. “When men start down this path, they can feel very worried that something serious is going on,” says Reale. “Once we know nothing is going on medically, we can say yes, you hurt, but you’re not being harmed, and we can empower them with strategies.”

Get the right meds, supplements, and food

Many docs throw antibiotics at the problem, but if you don’t have a positive culture for bacteria, then there’s no need to take an antibiotic. Other medicines that doctors can prescribe, depending on where your pain is surfacing, include Flomax, a medication usually given when people with enlarged prostates are having trouble peeing to relax the smooth muscle around the prostate and bladder neck, muscle relaxants like Valium, or low-dose antidepressants because of their effects on the nervous system. Your doctor may suggest supplements that some studies have shown help if there’s inflammation, including quercetin and bee pollen, and help you identify activities (like spinning), foods (spicy, caffeinated, or alcoholic) or stress patterns that may trigger pain for you.

Use heat or cold

A hot shower or bath, heating pad, or—for some men—a pack of ice can help temporarily ease the pain.

Whatever calms and soothes your nervous system is good for pelvic pain. Incorporating healthy ways to manage daily stress can help heal you—and may help prevent the problem in the first place. That can mean exercise, meditation, massage, gentle yoga and deep breathing. It’s important to regularly check in with your body throughout the day to gauge whether you’re carrying tension in any of your muscles, including your pelvic floor muscles (the ones you rely on to hold in a fart). Remind those muscles to relax as you take a few deep breaths and let go of the tension.

See a pelvic floor PT (stay with us here)

People assume no man would ever go to a pelvic floor physical therapist. That is, until you are a man suffering from pelvic pain. The suffering financial analyst we mentioned credits weekly PT sessions and the daily stretches and deep breathing exercises he learned from his therapist as the turning point for him. During a session, in addition to teaching body awareness, behavior modification, and exercises to calm down the nervous system and restore movement of the pelvic floor muscles, a therapist may also perform manual therapy of the muscles—accessing them externally and, if you’re up for it, internally—to increase their mobility. Find a practitioner at PelvicRehab.com or the American Physical Therapy Association. Pelvic floor physical therapy is considered a first-line treatment and, in most states, you don’t need a referral from your doctor.

Related posts:
13/04/2019 Health News Comments Off on Man Cramps Are a Real Thing. And They Hurt Like Hell.
Categories
Recent Posts