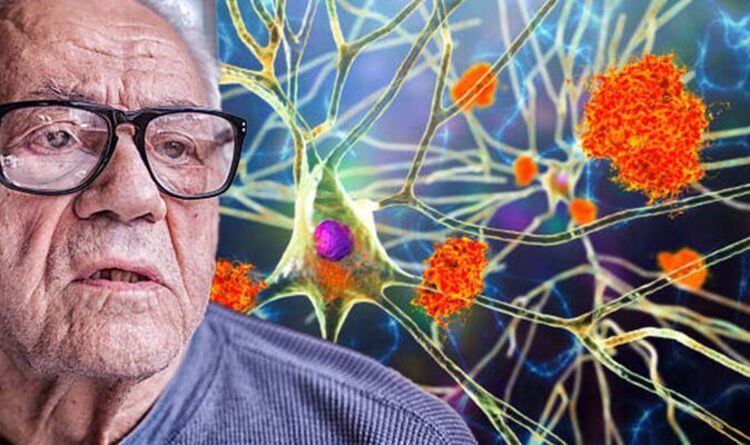 Research shows there are more than 850,000 people in the UK who have dementia. Early diagnosis means its progression can be slowed down in some cases, so it is important to spot the signs early. The NHS Health Check can help find early signs and tell you if you’re at higher risk of certain health problems that can also increase your risk of dementia.

The Royal National Institute of Blind People (RNIB) says: “Sight loss is typically under diagnosed in people with dementia because the signs can be difficult to separate. One condition may mask or be mistaken for the effects of the other and lead to inaction.”

The charity says people with dementia can have visual difficulties caused by the brain but still have healthy eyes, “that is problems perceiving what they see rather than how sharply they see it”.

RNIB says dementias that may have a direct impact on vision are: Lewy Body, Posterior Cortical Atrophy, Alzheimer’s and Vascular Dementia.

The Alzheimer’s Society (AS) says: “The symptoms of sight and hearing loss can be similar to some of the early signs of dementia.”

The charity explains that for example, you might become confused about where you are or struggle to follow a conversation.

“It can also make diagnosing sight and hearing problems in a person with dementia more difficult as well,” adds the AS.

Nonetheless, it says it is not true that if a person has dementia they won’t be able to manage a sight test.

The AS says telling the difference between sight loss symptoms and dementia is often hard to separate the signs of sight loss from those of dementia, and often one condition may mask the other.

It states that having difficulty with any of the following may suggest a person is having problems with their sight:

The AS does say that same of these issues may be caused by the person’s dementia.

“However, it is important to have the person’s sight tested as difficulties with their sight could be making their confusion worse.”

The charity explains dementia may cause a person to have hallucinations or see things that aren’t there.

“This is most common in people living with dementia with Lewy bodies, although other types of dementia may also cause hallucinations,” it says.

Visual hallucinations are the most common type experienced by people with dementia, and they can be simple such as seeing flashing lights or complex, such as seeing animals, people or strange situations.

The NHS says different types of dementia can affect people differently, and everyone will experience symptoms in their own way.

It adds: “Dementia is not a natural part of ageing. This is why it’s important to talk to a GP sooner rather than later if you’re worried about memory problems or other symptoms.”

Related posts:
18/02/2022 Health News Comments Off on Eyesight: The signs which may be early indicators of dementia – how to tell
Categories
Recent Posts