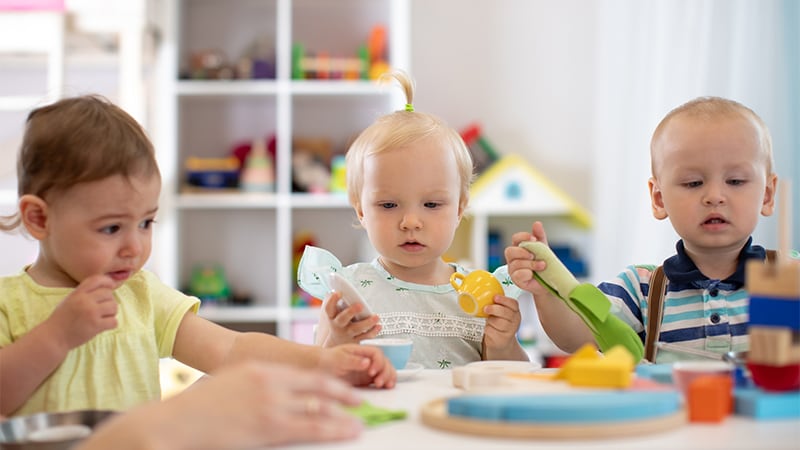 In his first State of the Union address earlier this month, President Joe Biden broached a tax policy question that neuroscientists and pediatricians also see as a scientific one.

Biden urged lawmakers to extend the Child Tax Credit “so no one has to raise a family in poverty.”

Apart from the usual political and budgetary calculus, physicians and social scientists are actively examining the ramifications that such policies could have on child development and long-term health outcomes.

To do so, they have turned to brain scans and rigorous studies to better understand the effects of being raised in poverty and whether giving families more cash makes a difference.

Initial results from an ongoing study known as Baby’s First Years suggest that providing extra money to mothers may influence brain activity in infants in ways that reflect improvements in cognitive ability.

Researchers, doctors, and advocates say the findings cement the case for policies such as the expanded Child Tax Credit. Others argue that reducing child poverty is a social good on its own, regardless of what brain scans show.

The new findings were published January 24 in Proceedings of the National Academy of Sciences (PNAS), as lawmakers were weighing whether to resume an expansion of the tax credit, which had temporarily provided monthly payments akin to the $333 a month looked at in the study.

The expiration of the expanded credit in December left some 3.6 million more children in poverty, bringing the total number to more than 12.5 million and pushing the child poverty rate to 17%.

Philanthropists and research teams have partnered to conduct other guaranteed income experiments around the United States, including one in New York called the Bridge Project, which is evaluating different levels of financial support for mothers with babies.

Some mothers are receiving $500 per month, others twice that amount.

Angelina Matos, 18, receives $1000 a month, allowing her to attend college and pay for necessities like diapers, clothes, and toys for her nearly 1-year-old daughter.

As one of 600 mothers participating in the project, Matos periodically answers questions about her daughter’s progress, like whether she is eating solid foods.

Megha Agarwal, BS, executive director of the Bridge Project and its funder the Monarch Foundation, said she was thrilled to see the early results from Baby’s First Years. “We are looking for ways in which we can strengthen our future generations,” she said. “It is exciting to see that direct cash and a guaranteed income might be part of the solution.”

Growing up in poverty is well-known to increase the likelihood of lower academic achievement and chronic conditions such as asthma and obesity. Relative to higher income levels, poverty is associated with differences in the structure and function of the developing brain. But whether interventions to reduce poverty can influence how newborns develop is less clear.

“There would be plenty of people who would say, ‘Well, it’s not poverty. It’s all the things associated with poverty. It’s the choices you make that are actually leading to differences in outcomes,’ ” said Kimberly Noble, MD, PhD, a neuroscientist at Columbia University in New York City, and a co-author of the PNAS study. Regardless of ideology, she said, the best way to address that question from a scientific perspective is through a randomized controlled trial.

Baby’s First Years has done just that­. Researchers gave 1000 low-income mothers with newborns a cash gift of $333 per month or a smaller gift of $20 per month, disbursed on debit cards, starting in 2018. Participants live in four metropolitan areas — New York City, greater New Orleans, Minneapolis-Saint Paul, and Omaha — and were recruited at the time of their child’s birth. Investigators currently have funding to continue the cash support until the children turn 4 years old.

When the infants were about 1 year old, investigators measured their resting brain activity using EEG.

The COVID-19 pandemic disrupted the ability to conduct in-person testing, so the number of children with EEG data was smaller than planned. Still, the researchers analyzed data from 251 kids in the group that received the smaller cash gift and 184 kids in the group that received the larger amount. Patterns of brain activity largely tracked those seen in earlier observational studies: more mid- and high-frequency activity (alpha-, beta-, and gamma-bands) and less low-frequency activity (theta-bands) among children in the households that received more money.

Faster brain activity is associated with better scores on measures of language, cognition, and social–emotional development. Slower activity has been linked to problems with behavior, attention, and learning.

“We predicted that our poverty reduction intervention would mitigate the neurobiological signal of poverty,” Noble said. “And that’s exactly what we report in this paper.”

The study builds on decades of work showing that poverty can harm child development, said Joan Luby, MD, with Washington University School of Medicine in St. Louis, Missouri, who served as a peer reviewer for the PNAS paper.

More follow-up data and information about the babies’ cognitive function and behavior over time are needed, but the study shows a signal that cannot be ignored, Luby said.

Luby began exploring the effects of poverty on brain development in earnest while working on a study that was meant to focus on another variable altogether: early childhood depression. The investigators on that 2013 study found that poverty had a “very, very big effect in our sample, and we realized we had to learn more about it,” she said.

The American Academy of Pediatrics (AAP) likewise has recognized poverty as an important determinant of health. A policy statement that the group published in 2016 and reaffirmed in 2021 outlines ways pediatricians and social programs can address poverty.

Benard Dreyer, MD, director of pediatrics at Bellevue Hospital, New York City, was president of the AAP when it published this guidance.

One lingering question has been how much low income worsens educational outcomes, Dreyer said. Perhaps other issues, such as single motherhood, a lack of parental education, or living in neighborhoods with more crime may be the cause. If so, simply giving more money to parents might not overcome those barriers.

Natural experiments have hinted that money itself can influence child development. For example, families on an American Indian reservation in North Carolina started receiving a share of casino profits after a casino opened there.

The new infusion of funds arrived in the middle of a study in which researchers were examining the development of mental illness in children.

Among children who were no longer poor as a result of the casino payments, symptoms of conduct and oppositional defiant disorders decreased.

“One of the policy debates in Washington is to what degree should it be to everyone,” Ajay Chaudry, PhD, a research scholar at New York University who is advising the Bridge Project, said.

Guaranteed income programs may need to be available to most of the population out of political necessity, even if the benefits turn out to be the most pronounced at lower income levels, added Chaudry, who served in the Obama administration as deputy assistant secretary for human services policy.

Money helps families buy toys and books, which in turn could support a child’s cognitive development. Meanwhile, low-income mothers and fathers may experience worries about eviction, adequate food, and the loss of heat and electricity, that could detract from their ability to parent.

Of course, many ways to support a child’s development do not require money. Engaging with children in a warm and nurturing way, having conversations with them, and reading with them are all important.

If the pattern in the PNAS study holds, individual experiences and outcomes will still vary, Noble said. Many children in the group that received the smaller gift had fast-paced brain activity, whereas some babies in the group that received the larger gift showed slower brain activity. Knowing family income would not allow you to accurately predict anything about an individual child’s brain, Noble said.

“I certainly wouldn’t want the message to be that money is the only thing that matters,” Noble said. “Money is something that can be easily manipulated by policy, which is why I think this is important.”

For the 18-year-old new mom Matos, accepting assistance “makes me feel less of myself. But honestly, I feel like mothers shouldn’t be afraid to ask for help or reach out for help or apply to programs like these.”

The sources reported a variety of funders, including federal agencies and foundations and donors.