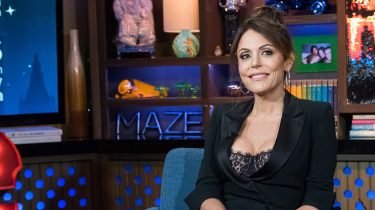 Bethenny Frankel’s severe fish allergy recently forced her flight to turn around after she realized fish was being served. (And you thought your flight was a pain.)

The Real Housewives of New York City star, 48, revealed what went down on Twitter Thursday night.

“Called airline [multiple times] to say I have fish allergy. Got on & they’re serving bass,” Bethenny wrote. According to Bethenny, the plane’s staff “couldn’t not serve it”—which then resulted in the plane being turned around.

Called airline mult x to say I have fish allergy. Got on & they’re serving bass. They couldn’t not serve it they said. Then they were turning around which I protested bc it would delay people. Cabin asked to not serve it & pilot made announcement to plane. That was fun. #epilife

Bethenny said she protested when the pilot insisted on turning the flight around because it would cause delays for everyone on board, but it happened anyway.

Wait, Bethenny has an allergy to fish?

Bethenny opened up for the first time about her allergy on Twitter two weeks ago after she was hospitalized for eating a soup that was cooked with fish. “I have rare fish allergy,” she wrote.

“Sun, I had soup, itched & was unconscious for 15 mins then to ER & ICU for 2 days w BP of 60/40.” She thought she was having a stroke, and if she’d taken five minutes longer to get medical attention she would have died, she wrote.

Her reactions to non-shellfish are so severe that she’s hidden it from the public. “It’s very unusual & confusing so I keep it to myself bc it is hard to describe,” she said.

It’s very unusual & confusing so I keep it to myself bc it is hard to describe. https://t.co/brB1WtYCmu

But now, Bethenny’s done keeping her allergy a secret, in hopes that her voice will inspire policy change and others to speak up. “I’ve always kept it quiet but that’s over now,” she wrote on Twitter.

But…can an allergy be bad enough to make an entire plane turn around?

Bethenny addressed the severity of her fish allergy: “To clarify: some allergens are transmitted by touch & air,” she wrote on Twitter. “Fish is one & is fatal. The more exposure to them, the more susceptible.”

She’s not wrong, according to Omid Mehdizadeh, M.D., a laryngologist and ENT at Providence Saint John’s Health Center in Santa Monica, California. “Those with sensitivities can develop an allergic reaction to smoke, fumes or odors,” he says. “Essentially, the same compounds that cause reactions when digested exist in the inhaled substance—particularly the fish proteins.”

Basically, since Bethenny’s fish allergy is severe, being in an enclosed space with fishy odors wafting around is not the ideal mode of travel for Bethenny given what happens to her or anyone with a similar sensitivity.

Here’s hoping the star lands herself a fish-free flight to her next destination.

Related posts:
05/01/2019 Health News Comments Off on Bethenny Frankel’s Flight Had To Turn Around For This Terrifying Health Reason
Categories
Recent Posts