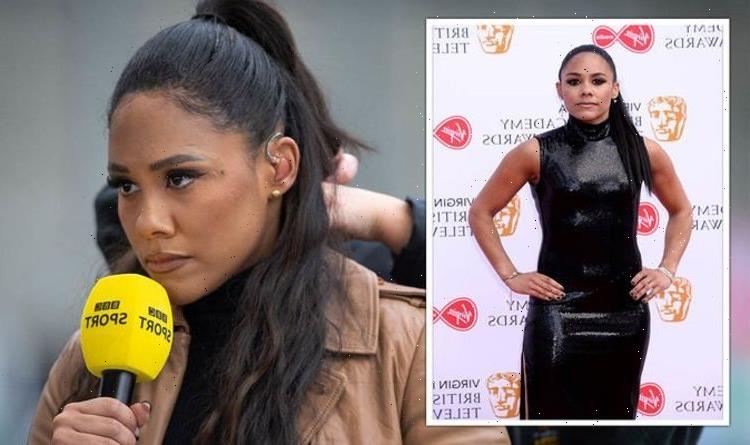 The star who most recently missed out on presenting The One Show on Monday after she was taken ill was wished well by viewers on Twitter. One person wrote: “[Jermaine] is doing a fantastic job presenting the show single-handedly tonight. Great work. Get well soon @AlexScott.” Although receiving warm wishes and love on social media, this has sadly not always been the case for Alex. In recent years she has opened up about how social media trolls have put her into a “really dark place”.

When the 37-year-old featured on the front of Women’s Health, she bravely revealed that when she goes home she felt like she was “all on her own”.

She continued to say: “I was lonely. [I’d think], I’ve got no one to talk to, no one knows what I’m experiencing or going through.

“Until, eventually, the only thing I could do was tell everyone. That was my, ‘I can’t take it any more, I need to tell you all what I’m going through’ moment.”

Revealing more, the former athlete reported in The Sun, that overall she defines herself as a happy, smiley person who loves socialising and meeting new people. Yet there are some days where she “feels low”.

One specific thing that didn’t help the star’s mental state was comments she received online.

Alex continued to say: “Being an athlete, you’re used to criticism, and I could always take that as a footballer in terms of: ‘I don’t think you had a good game.’

“But trolling – it’s not related to what I can improve. I went from being on screen doing a job I love to thinking, ‘I know what’s going to happen as soon as I step off this chair.’”

These feelings of loneliness and unhappiness came to a climax when Alex went to see a therapist and was told she was depressed.

Speaking about her diagnosis Alex said: “Looking at my daily life, many would wonder how I could be ‘depressed’. But mental illness doesn’t work like that.

“It’s so easy to think there are people worse off than us and we have no right to feel sorry for ourselves. But that thought process alone can be really dangerous, and lead to bigger problems.

“Mental illness can strike anyone at any time – no matter your age, gender or race. It doesn’t discriminate and can come totally out of the blue for some.”

Learning more about mental health, Alex now treats it the same as her physical health – which she states we should all do too.

“Our mental health is every bit as important as our physical health.

“You would still put a plaster on a cut even though it’s less severe than a broken leg. But still more of us than ever before are dealing with emotional and mental illness.”

Rethink Mental Illness – an organisation that works to support those affected by mental illness – explains that those who have experienced a period of low mood for more than two weeks should seek advice from their GP.

Symptoms of depression include the following:

Individuals may experience depression differently, and in reality there are several different types of the disorder. This ranges from clinical depression to depressive episodes, recurrent depressive disorder and reactive depression.

Clinical depression relates to individuals who have received a “diagnosis” from a doctor whereas reactive depression occurs after a particularly stressful event in your life such as losing a job or a loved one.

Whilst on her own mental health journey Alex found therapy “enlightening”, saying she will never stop due to the positive effect it has had on her mental health. In addition she has also launched Headroom – a mental health help site with the BBC.

She added: “Everyone thought I went to therapy to cope with trolling. And yes that was one reason, but it was just the icing on the cake – I’d been bottling up my emotions long before then. I would come home from work, drink, not speak to anyone and then wake up the next morning and put on a smile. Whoever you are, there’s no shame in speaking to a friend, a family member or even an anonymous helpline.”