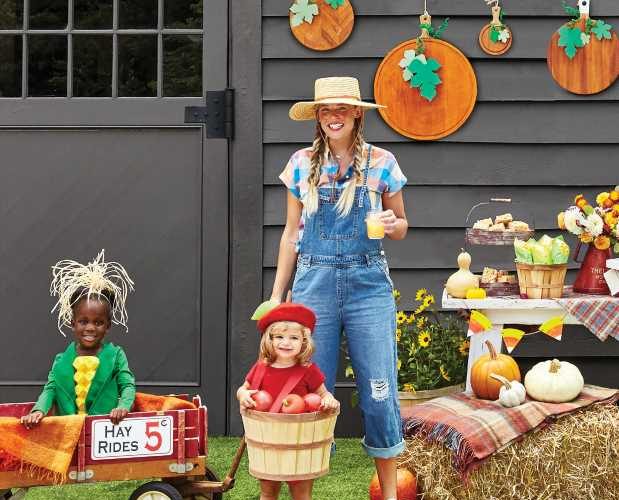 Thomas Rhett and wife Lauren Akins will soon welcome a third baby girl into their brood — but the couple wasn’t expecting another daughter.

“I don’t know why I thought it was a boy, because I’ve been more sick this pregnancy than with Ada James, and typically girls make you way more sick,” Akins, 29, says in a new interview for Country Living‘s first digital cover. “I think it’s the thought of three girls that sounds so overwhelming.”

“I can already see how my girls are going to mother her,” Akins shares of the baby on the way. “They’re going to have a lot of fun with it. And I will welcome the extra help.”

Akins also tells Country Living that she feels more prepared during her pregnancy this time around. (Willa was adopted from Uganda in 2017.)

“I can see the changes in my body quicker, and I’ve felt her move already,” she says. “It’s cool experiencing it once, and then kind of knowing what I’m getting into this time. I can be a little more excited and a little less anxious.”

When Thomas Rhett isn’t busy performing on his Very Hot Summer tour, Akins says the family loves to do seasonal arts and crafts together — and the country musician enjoys the activities just as much as the kids do.

“It’s a change of pace from the stage life and doing the shows, and he turns into a little kid all over again,” she says. “It’s sweet to watch.”

“When he’s off the road, we do whatever we can to be home and make memories with our kids here,” Akins continues. “That’s our favorite thing to do.”

Thomas Rhett and Akins announced in late July that they are expecting their third child, with a series of sweet family snaps and photos from the couple’s “gender reveal” party.

“Excited to share that I will now be paying for 3 weddings 😂,” Thomas Rhett joked in his caption, adding, “I feel so blessed to say that our third child is on the way and it’s a girl!! I love you so much @laur_akins. WG and AJ, y’all are gonna be the best big sisters! Bring on the crazy.”

“We decided we didn’t have enough princess dresses around the house so we’re adding another Akins baby girl to the family early next year 💕🎀😭💗💗💗,” Akins added in her post. “Despite Thomas Rhett’s initial shock (swipe to see video 😂) we are absolutely over the moon for our baby girl! Our girls cannot wait to meet their little sister 💕💕.”

The soon-to-be father of three expressed his desire for additional children one month earlier, in June, when he admitted in an interview with ABC News Radio that despite the “stressful” parts of touring with kids, he was ready to add more to the mix.

“It is very stressful, I feel like, to travel with your kids and still know that you’re waking up at 6 and you’re also playing a show at night. So in that aspect, I’m going, ‘I love my two kids and I’m kind of content,’ ” he said.

However, “If we stopped having kids now, I know I’d wake up at 45 and go, ‘We should’ve had five more,’ ” the country singer added. “Because I really do want to be able to sit at a Thanksgiving or Christmas table with the most gigantic family on the planet.”

Related posts:
04/09/2019 Family Health Comments Off on Why Thomas Rhett and Pregnant Wife Lauren Were Convinced Their Third Child Would Be a Boy
Categories
Recent Posts
We and our partners use cookies on this site to improve our service, perform analytics, personalize advertising, measure advertising performance, and remember website preferences.Ok