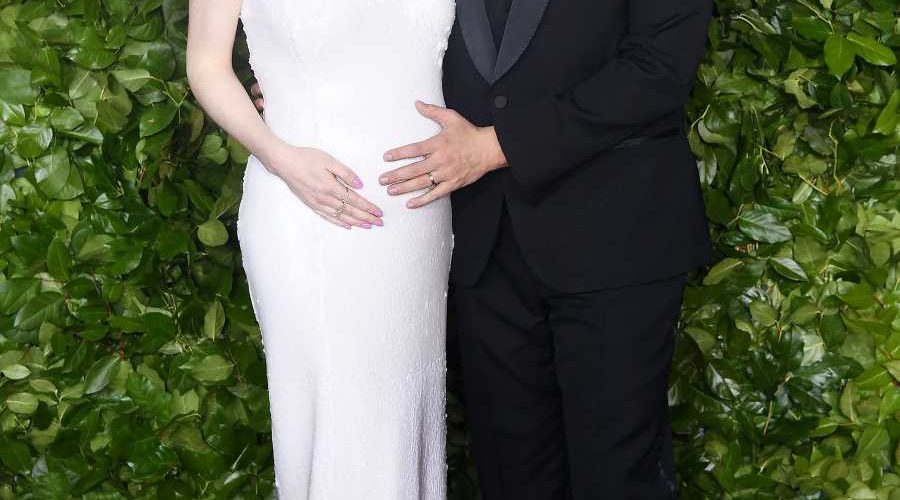 Santino Fontana had a lot to celebrate at Sunday’s 2019 Tony Awards.

Not only did the theater veteran and Crazy Ex-Girlfriend star, 37, pick up his first Tony — a best actor in a musical prize for his leading role in the stage adaptation of the 1982 comedy Tootsie — but he also walked the red carpet at Radio City Music Hall for Broadway’s biggest night with his wife Jessica Hershberg, who is pregnant with their first child together, a girl.

“Jess, none of this would be possible nor would it be worth it without you,” Fontana said in his acceptance speech, “or our baby girl who will be coming, and I can’t wait for her to come.”

The couple, who have been married since 2015, are due to become parents on September 21, Hershberg, 33, told PEOPLE backstage at the awards show.

It’s not the first time the two have been out in public since Hershberg learned she was pregnant, she told PEOPLE. But the other times, “I wasn’t showing quite as much,” she said.

Hershberg and Fontana met back in 2011 when they were both working as actors in New York after college.

“I don’t think I’ve ever had a friendship or relationship that’s been so instantaneously easy,” Fontana told The New York Times in 2015, adding that “we always wanted to be together all the time” (something that earned the pair the nickname “Velcro” from Hershberg’s mother).

Both have held a variety of roles on Broadway, even sharing the stage together in the 2013 revival of Rodgers & Hammerstein’s Cinderella. Fontana played Prince Topher, while Hershberg had a role in the ensemble and understudied the title role after Fontana left the revival the following year.

Fontana — who voiced the villainous Hans in Frozen — would go on to book big roles on TV in Crazy Ex-Girlfriend, Shades of Blue, Mozart in the Jungle, and Fosse/Verdon.

He returned to Broadway with Tootsie, playing Michael Dorsey, a disgraced actor who reinvents himself as up-and-coming actress Dorothy Michaels in order to land a dream role.

David Yazbeck’s musical of the classic Dustin Hoffman comedy went into Sunday’s awards with 11 nominations, including the prestigious best musical. It went home with two, including one for book writer Robert Horn and Fontana’s trophy.

The actor, who also performed on the show, spent three years developing his dual characters’ singing and speaking voices.

“I’m from a small town and the Tony Awards were the only I was able to ever see anybody who professionally made a living in the arts. It was incredibly important to me as a child,” Fontana also said in his acceptance speech. “I have to thank my parents and my sister…for always being supportive and never telling me no, and my grandfather for telling me the power about storytelling and embedding that passion in me and telling me I can.”

Tickets for Tootsie, at New York City’s Marquis Theatre, are on sale now.