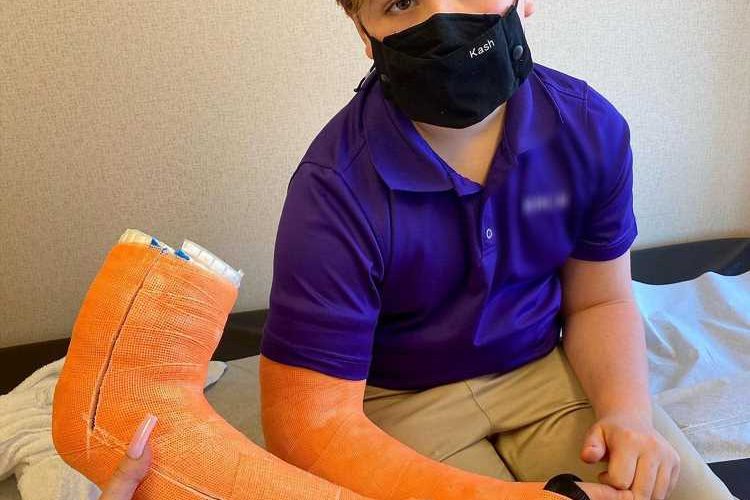 Kim Zolciak-Biermann has her hands full with 8-year-old son, Kash.

On Wednesday, the Don't Be Tardy star, 42, joked about the struggles of being a "boy mom" after revealing to fans that Kash — whom she shares with husband Kroy Biermann — had broken his arm.

"Today's been really fun!! 🙄🙈 my sweet baby @kashbiermann decided to break his arm!!" she shared on Instagram. "Being a 'boy' mom is no joke!! My nerves can barely handle it!"

The mother of six continued, "They put a cast on this morning… we were no sooner out the door and he had an allergic reaction .. Back to the office we went… cast removed and a new one was put on totally different material! Funny @nataliepsychic told me at the end of Dec that he would break a bone but be ok!!!…and that we are!"

Want to get the biggest stories from PEOPLE every weekday? Subscribe to our new podcast, PEOPLE Every Day, to get the essential celebrity, entertainment and human interest news stories Monday through Friday. Kim then shared a cuddly photo embracing Kash in a hug with his new orange cast on his right arm.

She also documented the cast replacement in a series of videos on her Instagram Story. Kash's broken arm comes just a few months after he had reconstructive face surgery to correct injuries he sustained after his dog bit him in a terrifying 2017 accident. Kim first opened up about the procedure in December, calling her son "a trooper" and "the toughest, bravest little boy."

"Last month Kash had reconstructive surgery from the dog bite 3 years ago. We knew the night of the bite/surgery that he most likely would need another surgery in the future to correct the injury," she wrote on Instagram at the time.

"It was pretty severe and due to the severity of the swelling that night our plastic surgeon Dr. Joseph Williams (the best) did the very best he could," Kim continued. "I'll never forget that day as long as I live and as much as we thought we 'put it in the back of our minds' when Kash came out of surgery this time it hit Kroy and I pretty hard." The reality star added that the family had "a rough couple of days" after the surgery, but that three days post-op Kash woke up and told her, "Mom, I feel great!"

"I knew we were on the road to recovery," Kim said.