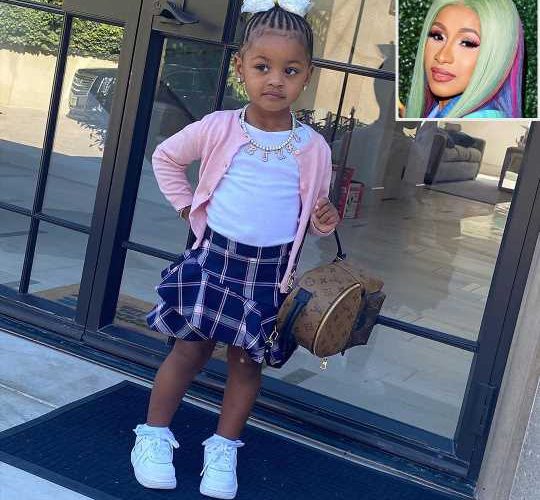 Kulture Kiari has broken onto the social media scene.

Cardi B debuted her 2-year-old daughter's very own Instagram account over the weekend, reposting some of the first images shared to Kulture's feed and inviting her fans to "Follow @Kulturekiari new IG … soo much cool bute [sic] baby stuff coming up 🎀🌸."

Although the toddler's verified account was only created two days ago, she has already racked up almost 700,000 followers, as well as tons of likes and comments on the various photos and videos of her showing off her outfits, swimming in a pool, matching with Mom and more.

"Hey babyyyyy!!!! You look so beautiful!!! 😻😻😻my sweet smart angel 💖💖💖 i loveeee youuuuu! 😚😚😘💘💝," Cardi B's sister Hennessy Carolina commented on one video of her niece rocking a "KULTURE" necklace and carrying a mini Louis Vuitton purse.

In one clip, Kulture even already appears to know how the platform works, watching a video and double-tapping it to give it a like. "On my Instagram making sure my mommy don't post nothing embarrassing on my page," read the funny caption on the video.

Cardi B Hits Back at Criticism Over Offset Buying Daughter, 2, a $9,000 Handbag for Her Birthday

Speaking with Radio.com last month, Cardi B gave an update on Kulture, saying, "These terrible two things, it doesn't come in the middle. It just comes right away," adding, "Her tantrums sometimes, I'll be like, 'Oh my gosh. This is crazy.' She has this look where I'll be like, 'You are up to no good.' "

Amid Kulture's terrible twos phase, the "WAP" rapper, 27, also said her mini-me — whom she called a "funny baby" and "such a sweet and funny person" — has quite a penchant for a certain frozen dessert, despite the time of day.

"It can be like 11 o'clock and it's like, 'You want ice cream right now? I know how you get at night when you eat ice cream or a certain type of candy.' She just gets too hyper," said Cardi, who shares Kulture with estranged husband Offset of rap trio Migos. Cardi B filed for divorce from her husband of three years — who also has three older kids from previous relationships — at an Atlanta courthouse on Tuesday, reportedly after finding out he had been unfaithful yet again.

The "Bodak Yellow" hitmaker said in her filing that their marriage is "irretrievably broken" and "there are no prospects for a reconciliation," PEOPLE confirmed. The pair is due in court on Nov. 4.

"Offset has pretty much cheated the entire time [they've been together], but Cardi looked the other way because of the baby," a source told PEOPLE at the time. "She also didn't want to be embarrassed. But she's had enough."

The rappers' split follows previous accusations of Offset's infidelity. In January 2018, Cardi (née Belcalis Marlenis Almanzar) outwardly confirmed Offset (né Kiari Kendrell Cephus) was at the center of a sex tape cheating scandal after rumors of a video and alleged liaison with another woman surfaced in December 2017, three months after the couple had secretly tied the knot.

Related posts:
21/09/2020 Family Health Comments Off on Cardi B's Daughter, 2, Gets an Instagram Account — and Already Has Over Half a Million Followers
Categories
Recent Posts