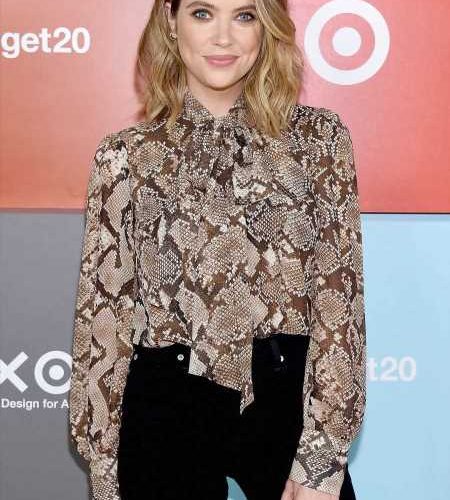 Ashley Benson has babies on the brain — and all around!

Not only is the Pretty Little Liars alum’s former costar Troian Bellisario a new mom, but now another cast mate from the cult hit — this time, Shay Mitchell — is expecting a daughter next month.

“I just can’t wait to see her with the baby,” Benson, 29, told PEOPLE at Target‘s 20th Anniversary Celebration on Thursday night. “She’s going to be an amazing mom.”

Even though Mitchell, 32, has a few weeks to go until she welcomes her baby girl, Benson already has a sweet (and luxurious!) gift in mind for the little one on the way.

“I’ll get her a designer item,” she says. “I always get [my friends] Gucci jumpers. It’s going to be the best.”

“It’s so fun that [Shay] and Troian had babies [around] the same time,” Benson says. “I know Troian really helped her through this pregnancy by telling her what she went through. I’m just excited to have another little ‘niece.’ Now I get to enjoy both babies.”

Benson and Bellisario have both shown their support for their costar’s pregnancy recently. When Mitchell announced her exciting news in June, her friends and family — which also included costar Janel Parrish, Vanessa Hudgens and Olivia Munn — left comments celebrating the mom-to-be.

And although Benson isn’t quite ready to be a mom herself, she’s already counting on her former costars (whom she lovingly refers to as her “older sisters”) for advice when the time comes.

“I’m obsessed with babies,” the star says. “I want, like, 25 kids. Now they’re going to help with mine whenever I get pregnant — not anytime soon — but it’ll be fun.”

In fact, Benson is already planning ahead, including purchasing some baby clothing. “I just got three vintage T-shirts for my future children,” she adds. “I’m just going to keep them until they can wear them. I will go crazy.”

The actress has been linked to model and actress Cara Delevingne since August 2018 and confirmed their relationship in July after getting a “CD” tattoo.

Related posts:
09/09/2019 Family Health Comments Off on Ashley Benson Says Shay Mitchell Will Be an 'Amazing Mom' – and Reveals Luxe Gift for Her 'Niece'
Categories
Recent Posts
We and our partners use cookies on this site to improve our service, perform analytics, personalize advertising, measure advertising performance, and remember website preferences.Ok