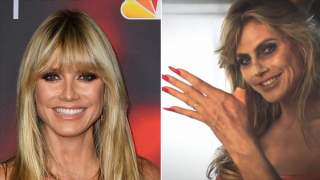 As the reigning queen of Halloween, Heidi Klum sure knows how to put together a shockingly creepy look. Every year we wait to see how she'll out-creep the last costume, and we're always surprised at the reveal.

For example, there was the 2019 flesh-eating alien get-up that was truly grotesque, then we witnessed the model transform herself into home decor, and one year even – this is where the scare factor really comes in – avoided being devoured by her children-turned-zombies. Klum doesn't just throw on fangs and call it a day. Instead, she creates a spooktastic narrative that leaves us gripping the edges of our phones because her top-notch graphics are a little too realistic.

Yesterday, Klum released a behind-the-scenes teaser for this year's Halloween makeup look with the caption, "We all go a little mad sometimes." With a messy blonde updo, sunken eyes, and a blood-red manicure, she looks like a housewife who's taken a very dark turn. In the video below, you can see her "accidentally" chopping off a finger while preparing a salad and deciding to toss it into the mix, plus a generous shot of her devouring something meaty with a crazed look on her face.

Safe to say this is a character with a whole lot of twists — could we really expect anything less from Klum, whose annual spooky bash is the season's equivalent of the Met Gala?

Luckily for us, Halloween is quickly approaching, so we won't have to wait too long for the full reveal. But to make sure we don't miss any last updates from the 'ween queen, we'll keep our eyes peeled on #HeidiHalloween 2021.