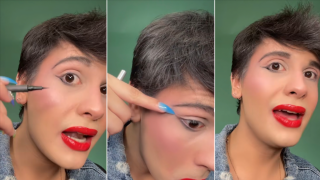 TikTok never seems to skip a beat with the eyeliner hacks. One of the latest tips popularized by the app’s beauty community involves using press-on nails to create winged eyeliner. The goal, may you ask? To make perfecting that wing a little easier.

TikTok user @mualesandro posted a video of using a pair of press-ons to make a winged eye on Monday, October 18. However, it seems that he already took a shot at the hack back in June of 2021, given the fact that he posted a video — minus the press-ons — demonstrating the technique on Thursday, June 3.

Of course, some of TikTok’s beauty creators caught onto this eyeliner hack back when he posted the first video and decided to give this arguably unusual winged eyeliner method a try. Makeup artist Jessica Maas attempted the technique on Wednesday, June 9, without press-ons  — aka her "actual nails" — as well and was impressed by the results. Since attempting this hack on TikTok, she tells Allure that she's tried the technique again. "It's such a simple and easy way to get your eyeliner perfect in five seconds without having to stress if it's going to work or not," she explains.

TikTok user Parker Riley also hopped onto the trend after seeing a video of the eyeliner hack on his TikTok For You page and due to his fans constantly tagging him in the comments section of the original video. Unlike Maas, Riley hasn't used the hack since posting his video on Monday, August 9. "Although the hack was successful at helping to outline the shape of the wing, continue[d] use of the hack [may] cause eye wrinkles. It is not good to consistently rub and pull against your skin, especially near the eye area," he says.

According to ophthalmologist and clinical spokesperson for the American Academy of Ophthalmology, Ashley Brissette, M.D., Riley's claims regarding the effects of repeatedly prodding and pulling around the eye area are, in fact, true. "The eyelid skin is extremely delicate and thin. Pulling on the eyelids like this repeatedly over time may lead to wrinkles around the eyes, sagging skin, and even asymmetric droopy eyelids, [a condition known as ptosis," she says. But there's more: Brissette says bacteria lingers "in and under our nails." That being said, constantly putting your fingers near your eyes may also result in contracting an eye infection like pink eye.

If you're still looking to create a flawless winged eyeliner look, Brissette says "you can probably achieve a similar effect with a pointed cotton swap, which wouldn't pull so much [on the skin] and is also more sanitary." On the other hand, if you're still pressed to try the winged eyeliner hack (no pun intended), "wash your hands and under and around the press-on nail really well and avoid pulling on the skin too much," she explains.

Thankfully, from a genius eyeliner hack specifically designed for those with limited eyelid space to the Lottie London Stamp Liner, there are a plethora of other eyeliner tips and tricks TikTok has in store for makeup enthusiasts of all skill levels.