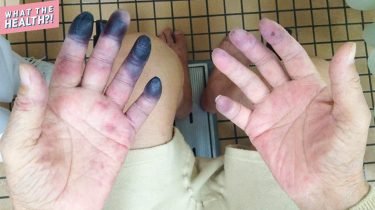 Photographs of medical conditions aren’t usually pretty (and that’s an understatement), but they’re definitely fascinating—and they can almost always teach us something about our bodies and our health. Take, for example, photos in today’s New England Journal of Medicine that demonstrate what can happen when chronic inflammation goes unchecked throughout the body. Here’s a hint, and a warning for squeamish readers: It involves blackened fingers and toes.

According to the authors of the new report, an 84-year-old man reported to his primary care doctor in Japan with discoloration and pain in his fingers and toes that had gotten worse over a two-week period. He’d also developed a 100-degree fever and general feelings of malaise, as well.

His doctors described “blue-black discoloration” on his left hand, “dusky discoloration” on his right hand, bruising and lesions on both hands, and more of the same on the toes of both feet. Lab tests revealed normal kidney and liver function, but they did show that he had an elevated C-reactive protein level—an indication of inflammation throughout the body.

It was clear that this man was suffering from necrosis, or tissue death, in his fingers and toes. But there are many possible causes of this, his doctors wrote, including infection, arterial embolism, and blood clotting disorders. The patient was tested for these and other conditions, all of which came back negative.

The doctors assumed that the patient was suffering from vasculitis, a condition in which a person’s immune system attacks his or her blood vessels, causing inflammation that gradually thickens and weakens artery walls. This can result in blood restriction to extremities, hence the scary-looking—and literally dying—hands and feet. The patient started on a steroid treatment to reduce that inflammation, and doctors performed biopsies on his lesions that confirmed their suspicions.

The patient was diagnosed with polyarteritis nodosa, a form of vasculitis that affects medium-sized blood vessels. According to the Johns Hopkins Vasculitis Center, polyarteritis nodosa sometimes occurs along with hepatitis B, but it usually happens for no known reason. (This particular patient tested negative for hepatitis.) The condition most often occurs in men in their 40s and 50s, but it can also occur at any age and in women as well.

Polyarteritis nodosa is almost always fatal when left untreated, according to Johns Hopkins, so it’s definitely important to get to the doctor ASAP if you experience anything like what this patient was going through. (Yes, seeking medical attention when your fingers turn black should go without saying, but then again…)

Other symptoms of the disease include fever, sweating, weight loss, severe muscle and joint aches, abdominal pain, and tingling or numbness in the hands and feet. But don’t freak out too much about this condition: It’s pretty uncommon, affecting only about one in every 22,000 to 33,000 people in the United States every year, according to the federal Genetic and Rare Diseases Information Center.

As for our unlucky patient, he was treated with the immunosuppressant drug azathioprine and had to have the blackened parts of his fingers amputated. Fortunately, his doctors wrote, “the remaining fingers and toes recovered completely.”