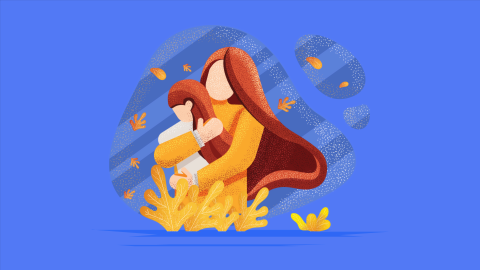 We were in the grocery store when my miscarriage started. I was scouring the breakfast food aisle for my kids’ favorite cereal, something I’ve done a hundred times before, when the bottom fell out of our lives. I instantly knew the wetness in my underwear was a bad sign, and I fought back tears as I pulled the kids out of the shopping cart and escorted them into the small bathroom stall. They both put their tiny hands on my back as I hung my head and sobbed at the drops of blood in the toilet. In the midst of my own grief and confusion, I was struck by the question: How on earth do you talk to kids about miscarriage?

When I had told my husband that I was unexpectedly pregnant with our third child, our nearly five-year-old daughter was less than 10 feet away. She was too engrossed in her LEGOs to hear what we were talking about, and missed our shared anxiety over the news — can we afford another kid, would we have to buy a bigger house, could we afford a bigger house — but she turned to look at us as our trepidation turned to joy.

“They’re going to be so excited about this,” I whispered to my husband after our oldest asked us what we were talking about. My husband thought we should wait to tell them the good news though, his argument was that they’d be unable to keep the news a secret until we were ready to share it ourselves.

I countered that it didn’t really matter. This was our third, and last, baby. The thrill of making a big spectacle of the announcement had worn off after the second kid. Plus, I didn’t feel like we needed to wait for the traditional 12 weeks before going public. After all, I’d already had two perfectly healthy pregnancies, I had no reason to suspect this one would be any different.

Together we called her and her two-year-old sister over to the couch where we’d been sitting, and told them the news. They literally screamed with excitement, and the two of them took turns kissing my yet unchanged belly while telling the baby how much they already loved it.

Two second later a fight broke out, but they played nicely for a few minutes first. #sisters #friends #youvegotafriendinme

I quickly found out my husband was right — our oldest told every person she laid eyes on that there was a baby in my belly — strangers on the street, the cashier at the grocery store, even the new family that moved in next door. It was the first sentence out of her mouth anytime she encountered someone she hadn’t had a chance to tell yet. It was an exciting time for the four of us as we grew into the idea that some day we would be five.

Then came that day in the grocery store.

In the days that followed my miscarriage, I had to return to the hospital several times for repeat blood work to confirm what we already knew — the hormones indicating pregnancy were declining instead of increasing, I was losing my baby.

I cried a lot in those days. So much so that my oldest associated “blood tests” with sadness.

“I wish you didn’t need another blood test,” she told tell me as I sat at the kitchen table, suddenly reduced to tears in the middle of lunch. I was walking a fine line between trying to keep it together in front of them, and letting them see me experience my fear and grief. I wanted them to understand that it was okay to cry, especially when something upsetting happened, but I also wanted them to know that everything was going to be okay no matter what happened.

Once we had the final test results showing that my HcG had dropped below 50 we told them the truth. Up until then we had been trying to prepare them for bad news by letting them know that sometimes, in early pregnancy, babies just stop growing and mommies have to start over again.

My husband and I fought back our own tears as we struggled to comfort her and her little sister, who was crying because everyone else was and she didn’t know what else to do.

A few minutes after we all got ourselves under control the kids went back to their usual spot at the kitchen table with their LEGOs and art supplies and I got up to do a load of laundry and get lunch ready. The miscarriage was temporarily forgotten as life went back to exactly how it had been six weeks before.

In the days that followed I cried less, it was almost as though knowing the baby wasn’t going to make it was better than waiting to find out. When I did cry, and when my daughter would ask me if I was okay, I’d tell her that I was just sad about the baby. Then I’d tell her that I was already feeling much better. I used the experience to show her that even during the saddest times it was possible to feel better.

She didn’t cry again after that first day. And although she still told strangers more than I’d like — she announced to a very sweet older woman in the parking lot that there used to be a baby in mommy’s tummy but it died — she seemed to move on from the loss fairly quickly. We still talked about the baby whenever she brought it up, and I explained that we were sad, and it’s not what we had hoped for, but that sometimes these things just happen.

I thought about what she would remember of this time when she became an adult and I decided that I want her to have these memories of me experiencing pain and sadness in a healthy way. I want her to remember that I cried for a minute on the couch when I opened an email from my baby tracker app telling me what I could expect during this week of my pregnancy, but that I wiped my tears away and got her a snack a few minutes later when she asked for one.

If she decides to have a baby someday, I want her to remember that miscarriages happen, and that they happen to people she knows. Not because I want her scared or prepared, but because I want her to be able to talk about her own fears and emotions openly. We don’t publicly talk about pregnancy loss as a society, and that does a great disservice to the families who experience it. Nearly one in four pregnancies end in miscarriage. That’s a lot of quiet grief that nobody should have to endure alone.

Most of all, I want her to remember that this period was a very sad time for our family, but that the sadness didn’t last forever. I’d like for her to have the memories of how we had age-appropriate conversations about what we were feeling, and how we didn’t hide our emotions or bury them under something else.

I hope that by being open and honest with her as I navigated these new emotions, I gave her the blueprints to navigate her own big emotions some day.

Related posts:
30/09/2019 Kids Health Comments Off on Why I Told My Kids About My Miscarriage
Categories
Recent Posts
We and our partners use cookies on this site to improve our service, perform analytics, personalize advertising, measure advertising performance, and remember website preferences.Ok