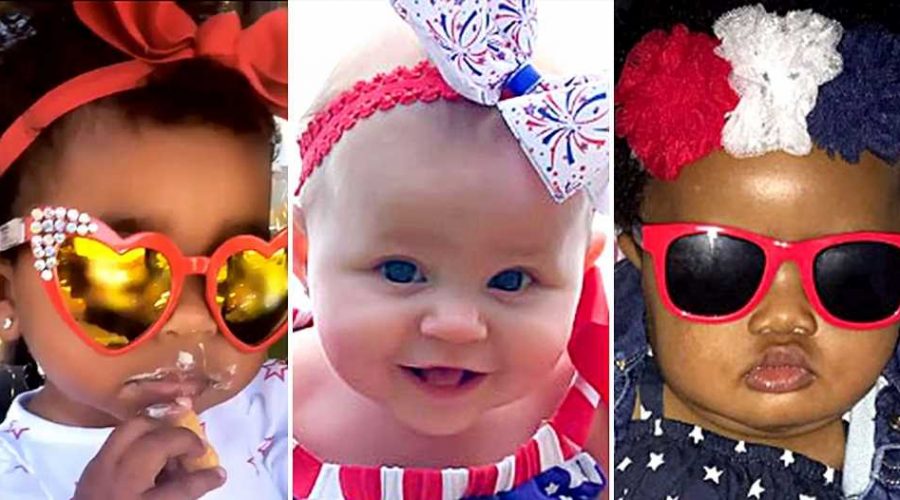 Petite and patriotic! Celebrity children, including Khloé Kardashian’s 14-month-old daughter, True, and more, celebrated the 4th of July with their parents in adorable outfits.

For some famous families, this was their first time ringing in America’s birthday with a baby. Jessica Graf and her boyfriend, Cody Nickson, for example, just welcomed their daughter, Maverick, in March.

The Big Brother alum, 28, posted a selfie with her 3-month-old on Thursday, July 4. “She’s just like her father!” the Amazing Race vet captioned the sweet mother-daughter shot. “Can’t keep her eyes open for a photo. Lol Happy 4th everyone.”

The reality star was all smiles in a red tank top and gold necklace, while her baby girl appeared to be sleeping on her chest in a blue and white bathing suit. The little one later changed into a stars-and-stripes one-piece.

Other stars celebrated the national holiday with their entire brood. Bachelor alums Catherine Giudici and Sean Lowe took a photo of their 3-year-old son, Samuel, sitting amongst American flags, as well as their 13-month-old son, Isaiah, sleeping in his dad’s arms on a boat.

The former ABC personalities had more to celebrate this week. On Tuesday, July 3, Samuel turned three.

“All Samuel wanted for his 3rd birthday was to go to Rainforest Cafe with his family. So that’s exactly what we did,” Giudici, who announced her third pregnancy last month, captioned a photo on Instagram at the time. The family of four looked 4th of July-ready in red, white and blue ensembles.

Keep scrolling through the gallery to check out other famous families rocking festive outfits, from Anna and Josh Duggar’s five kids to Paola and Russ Mayfield’s 6-month-old son.