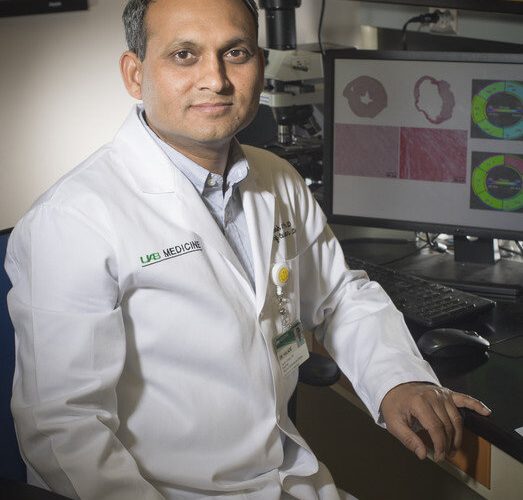 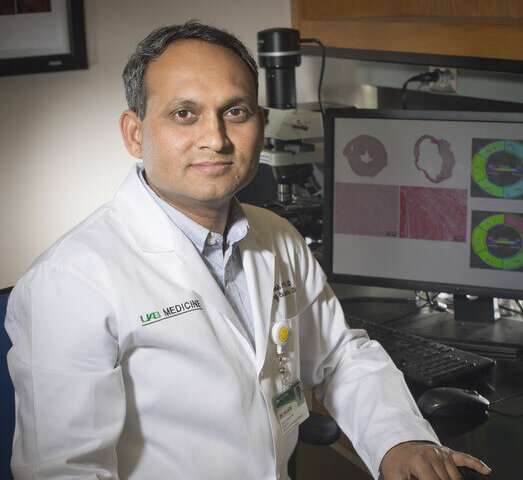 After heart attack injury, several fatty-acid-derived bioactive molecules—including one called resolvin D1—play an essential signaling role to safely clear inflammation and help repair heart muscle. The mechanism of how this resolution occurs is not well-understood.

There is a receptor on the surface of many immune cells called ALX/FRP2, and in models of atherosclerosis, ALX/FPR2 is known to act as a sensor to help resolve inflammation.

In a 2015 study using a mouse model, University of Alabama at Birmingham researcher Ganesh Halade, Ph.D., observed that, after heart attack injury, ALX/FPR2 was highly expressed in immune myeloid cells and was activated by resolvin D1 in immune cells in the spleen and in immune cells at the heart attack site. The result was an expedited resolution of the heart attack injury. Resolvin D1 is one of the omega 3 fatty-acid metabolites known as specialized pro-resolving mediators, or SPMs, that help clear inflammation.

Now, Halade and colleagues at UAB, Boston and France have used mice that completely lack ALX/FPR2 to learn more about the pathways this resolution sensor uses to target inflammation. Such knowledge will help in finding treatments to delay the human heart failure that often follows a heart attack.

Before beginning the mouse studies, Halade and colleagues examined heart muscle tissue from patients with heart failure. They found that ALX/FPR2 was plentiful in these human ischemic hearts, and it was located in the cytoplasm of the myocardium cells. In contrast, in healthy human heart tissue, ALX/FPR2 was limited to the cell membrane. To learn more, they then expanded study of the precise and comprehensive role of the resolution receptor using mice having an ALX/FPR2 gene deletion.

The researchers found that mice lacking ALX/FPR2 showed spontaneous, age-related obesity. With the obesity, the ALX/FPR2-null mice developed heart disease that weakened the heart’s ability to pump blood, and they had a shortened lifespan with aging. The aging mice also developed kidney inflammation, as shown by increased inflammation markers like NGAL, TNF-alpha and CCL2, and elevated plasma creatinine levels.

After a heart attack in normal mice, leukocyte immune cells in the spleen produce SPMs. However, in the ALX/FPR2-null mice, the researchers found lower levels of SPMs in the heart and the spleen after heart attack, indicative of non-resolving inflammation. Halade says this suggested impaired cross-talk between the injured heart and splenic leukocytes, a cross-talk that is required for the resolution of inflammation. In addition to the lower levels of SPMs, the ALX/FPR2-null mice showed dysregulation of several immune responsive enzymes—lower levels of LOX enzymes and increased levels of the pro-inflammatory COX-1 and COX-2 enzymes.

Finally, the ALX/FPR2-null mice showed impairment of activated macrophage cells to phagocytose—that is, to “eat” infecting microbes or dead human cells, one of the macrophage’s prime functions. After heart attack, the ALX/FPR2-null mice had increased numbers of neutrophils, the first phagocytic responders after heart injury, in both the spleen and the left ventricle of the heart. Also, there were reduced numbers of reparative macrophages in both the spleen and the heart.

Related posts:
20/11/2019 Health Problems Comments Off on Probing the role of an inflammation resolution sensor in obesity and heart failure
Categories
Recent Posts
We and our partners use cookies on this site to improve our service, perform analytics, personalize advertising, measure advertising performance, and remember website preferences.Ok