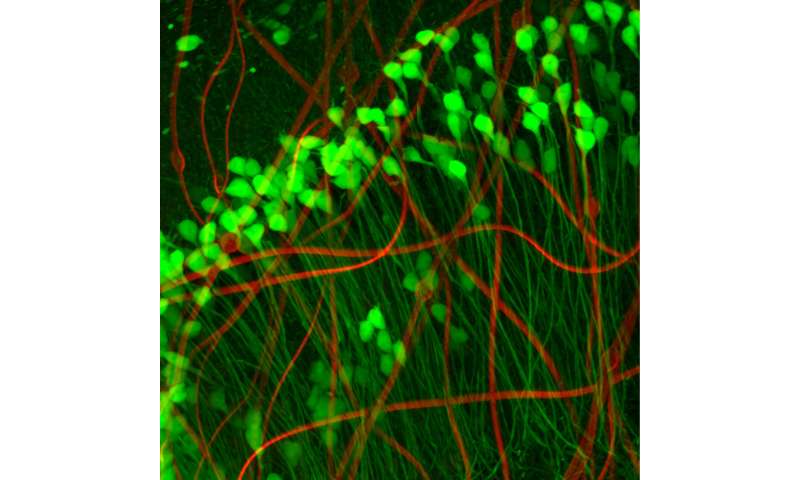 Like a well-guarded fortress, the human brain attacks intruders on sight. Foreign objects, including neural probes used to study and treat the brain, do not last long. But now, researchers have designed a probe that looks, acts, and feels so much like a real neuron that the brain cannot identify the imposters. According to Charles M. Lieber, this breakthrough “literally blurs the ever-present and clear dissimilarities in properties between man-made and living systems.” They have blurred the line between human and machine.

Lieber, the Joshua and Beth Friedman University Professor at Harvard University, and his lab members are authors on a new paper published in Nature Materials that presents a bioinspired design for neural probes.

Implanted directly into brain tissue, probes are designed to survive as long as possible in the organ’s warm, humid, and inhospitable environment. Sensors hidden within protective casings send data back to researchers. Knowing how and when individual neurons fire and neural circuits communicate could inform how to treat neurological disorders like Parkinson’s, reverse neural decay from Alzheimer’s and aging, or even enhance cognitive capabilities.

But current implants cannot trick the brain—they cause a foreign body response. Large and stiff compared to real neurons and neural tissue, traditional implants have two major impediments to sustained monitoring. During the initial placement in brain tissue—which usually requires surgery—neurons flee the impacted area. Previous studies have shown that the brain’s immune system senses the foreign object and gets to work, causing inflammation and scar tissue to isolate the device. Even if they can capture signals beyond the scar tissue, rigid probes can shift position and end up replacing one neural signal for another, closer one.

“This will ultimately make the recorded signal unstable,” said first author Xiao Yang, a fourth-year graduate student in the Lieber lab. Wearing a purple and pink speckled sweater, glasses, and jeans, she moved her cupped hands together, then apart, then together again as she explained how she and her team built a probe that inspires negligible immune response, records neural signals within a day post-implantation, and may even encourage tissue regeneration.

“The stereotype of the neural probe is that they are giant compared to the neuron targets that they’re interrogating. But in our case, they are essentially the same,” said Yang. Their probe mimics three features that previously have not been possible to achieve in a lab: the shape, size, and flexibility of an actual neuron.

Neurons look a bit like tadpoles, with round heads and long, flexible tails. So, Yang and her colleagues created a “head” to house the¬ir metal recording electrode, which matches the size of the neuron’s soma (or cell body). Their wire interconnect snakes through an ultra-flexible polymer “tail,” resembling the neuron’s neurite. According to Yang, their neuron-like electronics (NeuE) are “5 to 20 times more flexible than the most flexible probes reported to date.” The ones they bested were their own mesh electronics.

The width of a typical neuron “head” is about the same a very fine strand of hair (20 microns), and the “tail” can be 10-20 times finer. Measuring the same or even thinner widths, the neuron-like electronic is the smallest probe yet. To craft their microscopic tools, Yang and her colleagues relied on photolithography, which uses light to transfer a pattern onto material and constructs the probe’s four distinct layers of metal and polymer one at a time.

Once built, the team uses a syringe to inject sixteen of their cell imitators into the hippocampus region—chosen for its central role in learning, memory, and aging—of a mouse brain. There, they unfold to create a porous web, imitating the brain’s crisscrossing neuron network.

Bigger, solid probes exclude native cells from their territory and can disrupt the neural circuits that researchers are trying to study. Yang’s probes allow cells to integrate fully and take-up less than 1% of the volume where they are implanted. Starting from as early as a day to months later, neurons integrate with the artificial network, forming a harmonious hybrid. This assimilation explains why the team achieved stable data collection even months post-implantation. They did not lose even one neuron signal. Instead, they gained some.

“In an unexpected and exciting result,” according to Yang, the new neuronal signals indicate that newborn neurons may use the artificial neuron-like electronics as a scaffold to reach damaged areas of the brain and help regenerate tissue.

Regenerative treatments typically rely on stem cells to assist the brain to rebuild after damage. But, like larger probes, transplanted stem cells can cause an immune response, which weakens their efficacy. Neuron-like electronics instead recruits endogenous stem cells from the host’s brain and helps them migrate to the damaged region. Since they are not foreign objects, the brain’s immune system lets them work in peace. Though further research is needed, the neuron-like electronics could eventually offer a safe, stable alternative to treat neurological diseases, brain damage, and even depression and schizophrenia, where the added benefit of actively monitoring and modulating the regenerated neural networks will be possible.