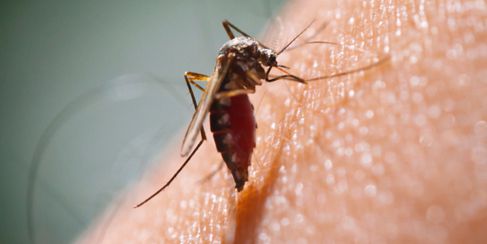 Mosquitoes are a nuisance for everyone. The pests can transmit diseases like West Nile, Zika and malaria. Less alarmingly, but still annoying, the blood suckers ruin summer hikes and pool parties. But mosquitoes pose an extra threat for people who are allergic to the bugs.

If you’re left with huge, red bumps after being attacked by mosquitoes, then you may have skeeter syndrome. Here’s how to tell whether your reactions are atypical and what you can do to protect yourself against the pain of these pesky bugs.

What is skeeter syndrome?

People with the condition have an inflammatory reaction to a protein in a mosquito’s saliva, according to the American Academy of Allergy, Asthma & Immunology.

It’s not clear how many people have this problem, but it’s relatively rare–for now–explains Dr. Clifford Bassett, M.D, allergist and clinical assistant professor of medicine at NYU Langone Health.

“I am seeing more people over the last five years that have skeeter syndrome,” he tells Men’s Health.

Bassett believes this is because mosquito populations are increasing, which can lead to more people seeking treatment for adverse reactions. This doesn’t necessarily mean that a greater percent of the population have mysteriously developed skeeter syndrome.

Some redness is totally normal after suffering from a mosquito bite, but what signifies more than normal discomfort? Skeeter syndrome bites will be large, swollen, red, and extremely itchy. Sometimes they’re even painful and feel warm, similar to an infection, says Bassett. In fact, people with skeeter-syndrome can be incorrectly diagnosed with a skin infection because the symptoms are similar, he says.

Scratching can cause infection since we have bacteria under our nails, and doctors may preemptively prescribe antibiotics.

In severe cases, patients could have trouble breathing, experience throat tightness, hives, and anaphylaxis. However, most people with skeeter syndrome don’t need to think about worst-case scenarios.

How to tell if you have skeeter syndrome

People constantly plagued with extremely large, red bites may want to take an allergy test. Bassett explains a simple blood test can detect allergic sensitivity to mosquito saliva, and a skin prick test can determine whether you really have skeeter syndrome.

Antibiotics are unnecessary unless a doctor is worried that you either have or will develop an infection, says Bassett. Over-the-counter cortisone creams can relieve redness and itchiness, while ice can calm swelling and ease discomfort. He even advises patients to pop a drugstore antihistamine before heading outdoors to reduce symptoms.

“I find that pretreating with an over-the-counter antihistamine is a very simple solution–and safe,” he says. “I prefer the ones that are non-sedating.”

Of course, you’ll want to see a doctor if symptoms are unbearable or you have trouble breathing.

How to prevent mosquito bites

Obviously, you want to avoid being a mosquito’s meal in the first place.

“If you can be proactive, and not reactive it’s much better,” says Bassett.

So what’s the best way to ward off the pesky critters? Use insect repellents whenever you spend time outdoors. Basett likes sprays containing DEET, but you can check out options on the Centers for Disease Control & Prevention website. Be sure to choose repellents that are 30 to 40 percent in concentration if you’re going outside for extended periods of time.

Related posts:
13/06/2019 Health News Comments Off on Yes, You Can Be Allergic to Mosquitoes. Here's How to Know For Sure
Categories
Recent Posts