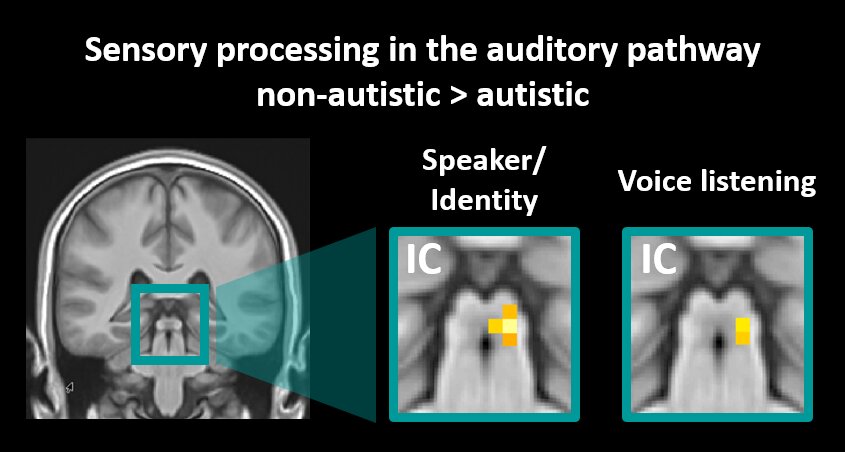 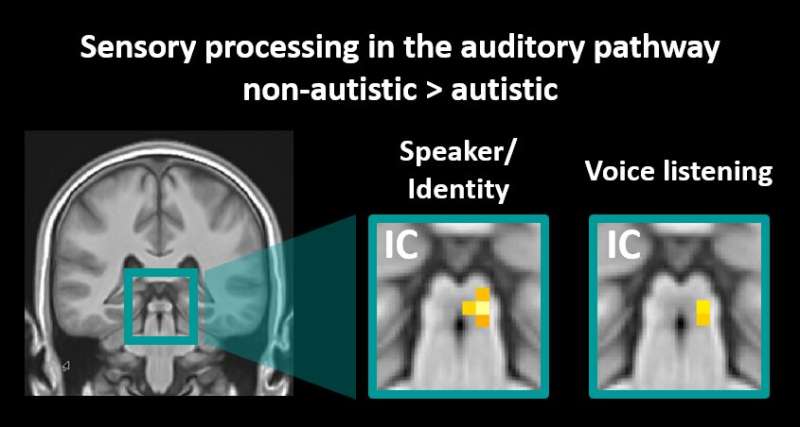 Voice processing is an evolutionary preserved process. Voice-specific responses are already present in utero and voice-specific brain responses develop early in human life—even before birth, the fetus reacts to the mother’s voice differently than to a stranger’s voice. In autism, altered voice perception such as a lack of preference for the mother’s voice can already be observed in early infancy. Also later in life, alterations in voice processing, such as difficulties in recognizing another person’s identity or emotion by voice or recognizing speech in noisy environments are prominent in autistic perception.

Prof. Katharina von Kriegstein and her team at TU Dresden have now presented a new study, in which they tested the functional integrity of auditory sensory pathway nuclei for voice processing in three independent functional magnetic resonance imaging (fMRI) experiments in groups of adults with autism and control groups. Members of the control groups were chosen according to age, sex, handedness, and IQ, so that they would match their partner in the experiment group. The neuroscientists focused on two aspects of voice processing that are impaired in autism: voice identity perception, and recognizing speech in noise. “We found reduced brain responses for the autism as compared to typically developed control groups in the inferior colliculus (IC)—the central midbrain structure of the auditory pathway, but not in other structures of the auditory pathway. The alterations occurred particularly for voice identity processing, but there are also first indications of alterations for speech-in-noise processing,” describes first author Dr. Stefanie Schelinski their findings.

For a long time, it has been assumed that difficulties in processing communication signals in autism occur at the level of the cerebral cortex or structures in the brain associated with emotion processing. One reason for this assumption is that most studies so far did not focus on the tiny midbrain structures that are associated with sensory acoustic processing. Now the team at TU Dresden provides first-time evidence that in autism, alterations in the neural processing of voices already occur at those earlier processing stages when the sensory signal is analyzed. Considering alterations in the early sensory processing of the voice when explaining communication difficulties in autism and other clinical conditions associated with communication impairments, is a novel approach, which holds the potential to inform models on typical and altered communication.

“A better understanding of the neural mechanisms behind autism provides a basis for clinical transfer, such as in the search for diagnostic markers. For example, testing impairments in voice identity, vocal emotion recognition or perception of acoustic voice features such as vocal pitch, might be a straightforward additional tool in the diagnostic approaches to autism. It might also be a good basis for evaluating therapeutic options since there is evidence for neural plasticity in the auditory sensory system due to training. Further increased basic knowledge about altered voice processing in autism also increases the description and classification of challenges in social communication people with autism are often faced with,” explain Katharina von Kriegstein, Professor of Cognitive and Clinical Neuroscience at TU Dresden and Stefanie Schelinski the impact of their findings.