It’s doesn’t surprise me that a study published this week has pinpointed a “golden hour” between 10pm and 11pm as the sweet spot for going to sleep.

The study, based on data from more than 88,000 participants of the UK Biobank, published in the European Heart Journal – Digital Health, found that those who dozed off between 10pm and 10.59pm had a lower risk of cardiovascular disease and stroke than those who dozed off earlier or later, but why should that be so? 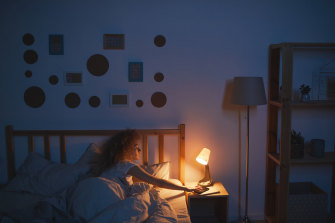 When you are sleep deprived you’re pushed into a state of sympathetic dominance; so basically, fight or flight.Credit:iStock

I would suggest that it’s because the vast majority of us, around 70 per cent of the population, are genetically programmed to feel sleepy between 10pm and 11pm and to wake up around eight hours later, between 6am and 7am, and in order to stay healthy we need to sleep in sync with our natural circadian rhythms.

Of course, there are people who fall outside these norms – the “owls” who feel sleepy later, at midnight and beyond. For those people, there will be no advantage in shifting their bedtime to hit this earlier “sweet spot”, as it is likely they will just lie there fretting, unable to sleep. The same goes for the natural “larks” who are happiest going to bed and getting up a bit earlier – again, they should stick with their natural sleep pattern.

This is far from the first study to show how sensitive we are to sleep timing. Or how important it is to stick to the same sleep/wake cycle on a daily basis. That’s because our internal body clock is synchronised by external factors, primarily by the rise and fall of the sun.

When we wake up, the light hits our eyes and it synchronises our body to the time zone we are in. I like to say that humans are solar powered because we are attuned to light and dark cycles, and anything that disrupts that will throw our body clock out.

If we go to sleep much later – or earlier – than we are used to, it messes up our internal body clock or circadian rhythm. For example, in COVID-19 lockdown, lots of us were watching Netflix or glued to social media and going to bed later, which pushed our circadian rhythm out of sync, leading to more disturbed sleep.

One global experiment that shows this is the spike in heart attacks we see when the clocks go forward in spring, with a 24 per cent jump the day after. This is because we’ve lost one hour of sleep and because of the confusion caused to our internal body clock.

The purpose of sleep is to activate your parasympathetic nervous system, leading to relaxation, growth and repair, recovery and immunity.

But when you are sleep deprived you’re pushed into a state of sympathetic dominance; so basically, fight or flight. You’ll see stress hormones, like cortisol and adrenaline rocket. Your heart rate shoots up and so does your blood pressure. If you keep that up for any length of time, it will increase wear and tear on the arteries, which increases your risk of a heart attack.

We also know that sleep plays a fundamental role in insulin regulation – that’s the hormone that controls our blood sugar – so lack of sleep can lead to changes in insulin sensitivity. One study showed that even a short bout of sleep deprivation (four nights of four hours) can be enough to make us pre-diabetic. Researchers found that partcipants’ glucose tolerance, which is their ability to break down glucose and remove it from the blood stream, was 40 per cent lower than average. We know that diabetes increases the risk of heart disease and stroke, since having too much sugar in your blood stream can damage the blood vessels.

Sleep also plays a fundamental role in cleaning up our arteries. So it could be that disturbed sleep increases our risk of atherosclerosis, where the arteries become plugged with plaques.

According to the research, women appeared to be at even greater risk of heart attack, through disturbed sleep, which is likely to be down to the age group the study looked at, which was between the ages of 43 and 74. The majority of women in this age group would have gone through menopause, increasing their risk of cardiovascular disease.

But it’s not just heart disease and stroke that are affected by body clock disturbance, or disturbed sleep. Sleep plays an incredibly important part in every aspect of our health, as recent research shows.

So what can we do to get the best-quality sleep? First, you need to keep to regular sleep/wake times. The body clock is a wonderful timepiece, which is kept in sync by external factors. The problem is if you constantly chop and change your bedtime and your wake time, then your body clock doesn’t know what’s happening.

You need a really good bedtime routine, so that means, in the last hour before going to bed, do some simple things such as switching off the television, and all devices like laptops and phones. That will reduce mental and emotional stimulation as well as the blue light stimulus that comes with it. If you’re looking at work emails, that will fire up your mental capacity and push you further into wakefulness.

You want to be engaging in calming, relaxing activities, such as gentle stretching, or listening to some calming music, or reading a nice book and dimming the lights.

In the morning you need to do the exact opposite. Morning light is essential because it tells our body clock that the day has begun and it’s time for biological day processes to switch on and for the night processes to switch off. So switch on a bright light when you get up, and a 10-minute walk at 10am will improve your mental health and sleep no end.

Since 80 per cent of the population need between seven and eight hours of sleep, if you’re going to bed between 10pm and 11pm, then you’re going to be getting up seven to eight hours later, between 6am and 7am. But again, that’s influenced by genetics. Some people will need a little bit less, some people will want to get up a little later, in the same way that some people might want to naturally go to bed earlier.

People often worry about waking up in the night, but it’s perfectly normal to wake up four to five times a night in sync with our sleep cycles, which last an hour and a half to two hours each. Most of us aren’t even aware of it, but if you are, I tell people to stay in bed. Even if you can’t fall back to sleep straight away, there are still benefits from resting.

But if fragmented sleep is becoming a problem, it’s usually because people are worrying and ruminating, and of course worrying about not being able to sleep can feed into a vicious cycle. At the Sleep School, I tell people to label their thoughts, “Oh there’s that work thought”, or “Oh there’s that health worry”, for example. It creates a bit of distance and can stop you from getting caught up in the cycle of worry.

You want to come back into a state of quiet wakefulness. So you might notice the touch of the duvet on your toes, to help anchor your mind’s attention into the moment. Or you might use the breath as an anchor. But this is not designed to get you to sleep – sleep is a biological process that we can’t control – it’s just allowing you to let go of those thoughts and to let your body rest.

As told to Sharon Walker. Dr Guy Meadows is co-founder and clinical lead of the Sleep School.

How to get into a good routine

7.30am: Open your curtains as soon as you wake up, says Linda Geddes, author of Chasing the Sun: The New Science of Sunlight and How it Shapes Our Bodies and Minds. “Get that flash of light into your eyes as soon as possible,” she says. “The cells at the back of your eyes connect with your body’s master clock in your brain.” This acts as a daily reset, which helps it to know when it’s time to fall asleep at night, she says.

8am: After getting dressed, leave your bedroom for the day. The brain builds associations between places and activities, so working in bed could cause your mind to race when you try to fall asleep at night. This is a key teaching of cognitive behavioural therapy (CBT) for insomnia, which according to a 2015 analysis is proven to help increase sleep quantity and quality.

12pm: Have your last cup of coffee. Caffeine has a half-life of around six hours; having a coffee at 3pm will result in half of its caffeine still being in your system at 9pm.

1pm: Have your main meal at lunchtime, says The Sleep Council. Eating a big meal just before bedtime can lead to discomfort and indigestion.

5pm: People who exercise regularly fall asleep faster and sleep for longer, according to a 2012 review. But not too close to bedtime: vigorous exercise within 90 minutes of sleeping can make it harder to drop off.

6.30pm: Alcohol also has a big effect on sleep, so if you want a glass of wine, it’s best to have it in the early evening.

7.30pm: Lower the light levels in your home to signal to your brain that it’s evening, says Geddes.

9pm: Open a window in your bedroom to ensure air is cool by the time you go to bed. A 2012 study found that warming up participants led them to wake up more during the night and reduced the amount they slept.

9.30pm: Try a warm bath or shower one to two hours before bedtime. The rapid drop in temperature when you come out of the bath simulates the natural drop in body heat at night. A 2019 analysis found that a 10-minute bath had positive effects on sleep quality. Sleep between 10-11pm.