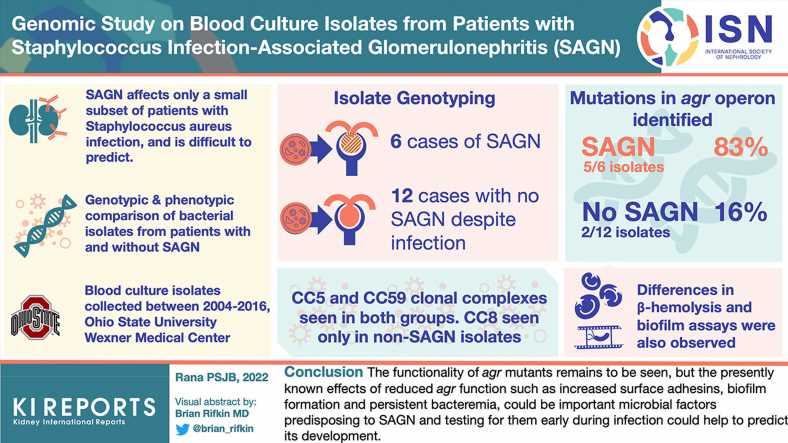 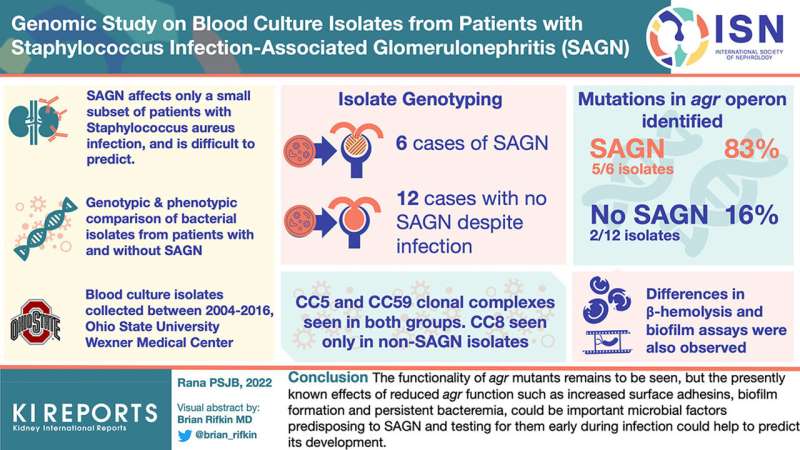 Researchers aiming to predict which staph-infection patients might develop a related kidney disease have found a high frequency of gene mutations in the infecting bacteria of affected patients, which suggests these variants may play a role in the body’s initiation of the renal damage.

The kidney disorder is a fairly uncommon autoimmune complication to Staphylococcus aureus infection. Although it is potentially reversible with quick administration of appropriate antibiotics and effective treatment of the infection, it can also lead to kidney disease or kidney failure.

“There are many varieties of autoimmune nephritis. For most of them, suppressing the immune system is the first line of treatment, but this type is unique because you have both an ongoing severe infection as well as this autoimmune tissue-injury response happening at the same time. Immunosuppression is not an option while the infection is still active,” said study senior author Anjali Satoskar, clinical professor of pathology in the Ohio State University College of Medicine. “It can be a diagnostic as well as a therapeutic challenge.”

In an exploratory study, Satoskar and colleagues found a higher frequency of mutations affecting a group of Staphylococcus aureus genes in blood culture isolates from patients with staph-associated nephritis compared to patients having staph infections without development of autoimmune kidney disease.

Though there is still much more to learn, Satoskar said testing in larger numbers is required to determine whether these mutations are pathogenic and can predict the development of this disorder in specific patients.

The research is published in the journal Kidney International Reports.

Though no national statistics on its prevalence exist, Satoskar said just under 1% of native medical kidney biopsies, performed for diagnosis and disease management, received at the Renal and Transplant Pathology Division at Ohio State Wexner Medical Center, where she currently serves as director, have been identified as SAGN cases.

For this retrospective pilot study, she and colleagues compared the genomes of S. aureus isolates from blood samples of six patients with SAGN and 12 control patients who had staph infections but did not develop glomerulonephritis. Obtaining samples is difficult because any single institution is likely to have only a limited number of blood culture-proven cases of SAGN available.

Though a host-pathogen interaction and abnormal host immune response are suspected to contribute to SAGN, the causal factors behind its development are still poorly understood.

“We wanted to see if there are any pathogen-specific factors that may be playing a role in the development of glomerulonephritis that we could test for and potentially predict development of this dysfunction early in the course of the infection,” Satoskar said.

The researchers found a few differences, the most striking of which was a significantly higher frequency of mutations in the agr (accessory gene regulator) cluster of genes in the staph isolates from SAGN patients compared to controls. This group of genes regulates staph virulence factors—functions that help bacteria gain a foothold and cause disease.

Previous research has shown that such a mutation results in decreased agr function, enabling the bacteria to shield themselves from the host immune response while attaching to tissue and multiplying and then, after finding that niche, destroying host tissue and immune cells to perpetuate the infection.

“This is a clever trick used by the bacteria,” Satoskar said. “Our additional study of these isolates also supports some of the downstream effects of decreased agr activity.”

The results also showed that development of SAGN is not specific to a particular strain—multiple strains of S. aureus were found among the SAGN samples. An accompanying demographic study using 85 SAGN cases and over 23,000 controls shows male predominance and peak age group of 60 to 70 years.