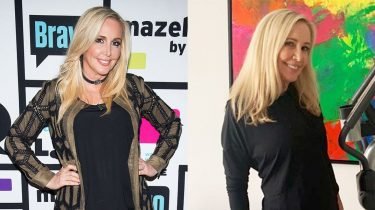 In 2017, The Real Housewives of Orange County star Shannon Beador revealed that she had gained 40 pounds from stress eating. Now, Shannon, 54, shares that she lost a bunch of that weight—and she has the photos to prove it.

“Getting there,” she captioned an Instagram photo of herself standing next to an elliptical machine. Shannon didn’t offer up much info on how she “got there,” but a source tells People that she’s been “working really hard over the past few months to get to her goal weight.” Shannon has also “been really dedicated on her fitness and wellness—and is pounds away from getting back to where she was before she gained the weight.”

Getting there… 👊 #rhoc #season14 #startingsoon

“She looks amazing, and is feeling amazing, too,” the source added. “It’s like emotional weight has been lifted off her as well. This next chapter of her life is going to be amazing for her.”

Shannon revealed her 40-pound weight gain in 2017 during season 12 of RHOC. At her heaviest, she weighed 172.2 pounds. When she saw that number on the scale, she knew she needed to make a change.

“I’m ready to lose the weight,” she told Tim Ramirez, her holistic specialist in a clip from the show. “I mean…it’s not normal. I’ve gained so much weight in a year. I got stressed,” she said, noting that allegations that her husband was physically abusive toward her caused her to eat more. Shannon’s specialist also pointed out that almost half of her body weight was fat and that she was at risk of developing diabetes and heart disease.

Just a few months later, during the season 12 reunion in the fall of 2017, she told Andy Cohen that she had already lost 25 pounds. “I have 15 more to go,” she said at the time.

She also told Bravo in August that her main drive for losing weight was her family. “After gaining 40 pounds, there came a moment when I knew I had to turn my life around for myself and especially my girls,” she said, while debuting her line of Real for Real Cuisine seafood meals for QVC.

Whatever she’s doing, it’s definitely working. (P.S. Where can I get her leggings?!)